Arguably my favorite stage race of the year, Cascade has been one of my main targets this season. My primary objective (of the year) was to win the final Aubrey Butte stage, which is nice and hilly but not too hilly. The dream of winning it has filled many long rides over the winters. In fact, Cascade was such a big goal of mine I even wrote in my iCal “Peak of Lifetime” for the week of Cascade. Just so I wouldn’t forget I guess. Even the time I’ve spent training on the course over the years, on that baked, tar-melted pavement among the dry junipers, outnumbers any other race course I’ve ridden. Including races and training, I’ve done roughly 80 to possibly over 100 laps of the course.

So it made sense that I lost ALL of the form just two weeks ago. After I got sick at NVGP I never quite made it back. I got through nationals all right but was on the downslide even then. I’m just worn out from being up so high for so long (I’ve basically been going fast since March). I’d hoped that my legs would come back around just in time for Cascade. I thought that maybe I just needed a few more hard days of training after being sick, which I did. Instead, I got even slower and had the worst race of the year. Cascade has been my only bad one of the season (not counting being completely sick at Hood) so I shouldn’t be too upset. Still though, one blemish on an otherwise spotless nose still stands out. And since it’s the most recent race I’ve done, the unpleasant feeling is still pretty strong.

I’ve lost all motivation to go into detail about the stages or my time spent in Bend with the team, our hosts, and my family, which is unfortunate because I’m sure at one point I had something meaningful or funny worth saying.

Day One was the Prologue, held on an undeveloped mile and a half loop near a golf course. I set the 43rd fastest time out of 200. Off to a great start, I know. Actually, I wasn’t too upset with this and wasn’t yet aware of how shitty my legs, mind, and body really were. After crossing the line I had some of the worst quad pain I’ve had in a long time and had to unclip both legs for a good minute as I coasted around a small parking lot.

Day Two was the McKenzie Pass road race. I got over the first climb without too much trouble but completely cracked on the last climb at the finish. I was 80th or 90th. Can’t remember. My GC race was already long gone and depression came to eagerly take motivation’s place.

Day Three was the long-ass, horribly flat TT. I blew up in the first three minutes and decided to just go super easy after that and save what little legs I had for the next two days. By the turn around I had slowed up so much that I was averaging just 297 watts. In fear of not making the time cut after a guy racing a road bike with no aero bars passed me, I sped up on the way back. My legs felt horrible today. Absolutely worthless, weak, wobbly toothpicks ready to snap in half under the slightest ounce of pressure. I have better form in early November.

Day Four was the Bachelor road race. I followed a move and counter attacked once about half way in and spent 2 minutes off the front before getting caught and spending the majority of the rest of the day among the last five wheels. I finished 100 something in a large group. I met my family and Adelaide at the top of the mountain. I wish they’d been able to see me at ANY other race this year. We went down to the river in town and swam, had a picnic, and later ate dinner. This was probably the best part of the entire trip. I had a second dinner of Chinese food back at our host house. One great thing about this weekend was the amount of food our hosts and team manager, Allen, prepared for us.

Day Five was the crit. I pulled out after completing over half the distance at 50 minutes. I’d been coasting at the back for half the time, just watching the clock. I was still hoping to have enough legs to do a good finish on the last day.

Day Six was the real wake up call to how cracked I currently am. I guarantee that even with the fitness I normally have in the dead of winter, without any racing or hard intervals in my legs, I could make it to the finish with the main lead group on this stage. Today I had nothing. I got bottles for my teammates and helped position John, who was sitting 15th on GC. I got popped the last time up the steep climb and rode easy to the finish with Berry, who’s also had a recent vanishing of form. Fortunately John held on and moved up to 12 GC, giving Firefighter’s a very good result for the week.

All in all it was a super depressing race for me. I tried to enjoy my time there but it was difficult to see the positives. This has been a very successful year for me. But, living with consistent success can lead to ignoring those good times and dwelling solely on the bad.

I’m taking two weeks super easy/just commuting, which will hopefully allow enough time to train and gain back my fitness before Buck’s County in early September, which will be my last race of the year. I originally thought I’d do some cycleocross this fall but that plan just went out the window. Rest is way more important. 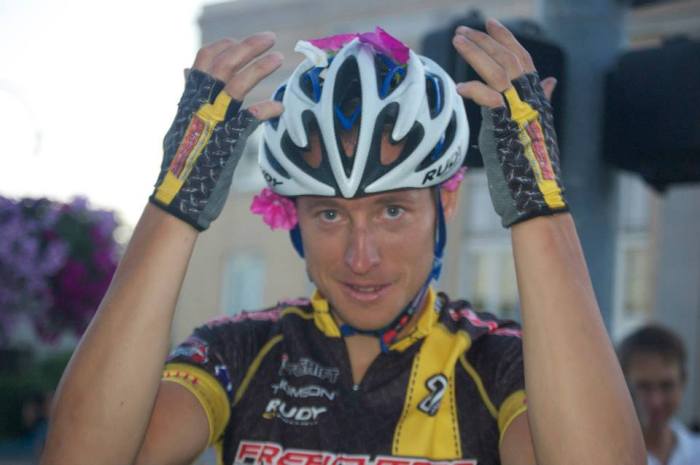