I took most of last week pretty easy, recovering from Redlands and was still feeling pretty bad by Friday. As my teammate Jake explained to me, only one thing can crack the dead leg shell that your body produces when it goes into hibernation mode like this: hard efforts. This weekend was full of them. I had a time trial followed by a team time trial on Saturday, then a road race down in Colorado Springs on Sunday.

I rode from home to the time trial and did an extra long warm up, knowing that my legs would need it. I spent almost too much time warming up and only got to the start line a few minutes before my start time. Cortisol was jacked. I busted out an 11th place, which was only 10 seconds slower than my teammate Scott, who wound up 5th. I think/hope I’m slowly improving. On another note, Colorado might be the only state where neither Chada Haga nor Tom Zirbel would for sure win a local afternoon time trial. Tom Peterman of Sonic Boom crushed it.

After lounging around for about an hour  with Scott and the the Rio Grande masters team in the parking lot, I re-warmed up for the team time trial with Jake, Scott and Colt. The wind had picked up significantly at this point, coming strong out of the west. As we got under way I felt like we were off to a slow start, so I upped the pace a couple times on the front, doing a bit too much surging. This wasn’t good because it caused Jake to blow up about two-thirds  into the race and it was down to just the three of us after that, working in the crosswind and trying not to get blown into traffic. We finished 4th, out of the money but it was a lot of fun. 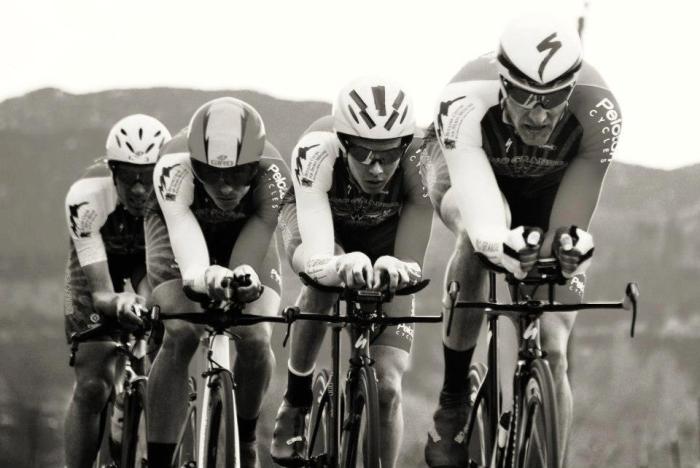 Front to back: Scott, Colt, me, and Jake.

With four and a half hours of riding in my legs, and the wind increasing, Adelaide and I cancelled our plans to drive down to Colorado Springs that night and camp out for my road race and her 18-mile group run. It was a damn shame because she’d bought all the necessary camping food: hot dogs and hot chocolate.  We ate them at home instead.

The drive down to the US Air Force Academy road race took place way too early in the morning, especially since Taco Bell was closed and I’d wanted to have a post-race burrito ready to go. The course was up on the side of the mountains on the Air Force Academy base, a school Adelaide had attended a while back. So she gave me a quick tour as we took a lap of the race in the car. She dropped me off to meet with her group run, which was previewing the course of a 50K race Adelaide is doing at the end of the month. I wandered around looking for the parking lot and my teammates.

I wasted little time getting things rolling in the race. Held on an always undulating, blustery course at over 7,000 ft altitude with an equal amount of elevation gain, I figured a breakaway would win. And being possibly overly confident, I decided that I’d be able to go with EVERY breakaway attempt, even if I started going from the gun. It was only a 70 mile race anyways, and according to Nick it’s impossible to get tired in a race that short. True fact not.

Throwing caution to the wind, I attacked into the wind and got away solo by kilometer two. Five or six minutes later,  Julian Kyer of Bissell and Liam bridged up to me. We worked it for a bit, but were caught at the base of the main stair-stepped climb, which is about half the course long. The climb is super non steep, has flat sections, but is incredibly windy and goes forever. I retreated to the back of the pack as I took my wind vest off (despite the cold temps I was already warm from my effort. And there’s no point in wearing a skin suit if you’re sheathed in a bulky wind vest).

Going irritatingly slow, I realized the peloton was no place for me today. I worked my way up the gutter and attacked again, having spent a total of 70 seconds in the peloton since being brought back.

Again, I got away solo and DRILLED it into the headwind climb. I hammered close to a 20K max time trial-effort wattage for a solid lap (five laps total today), increasing my lead to well over a minute before getting caught by a group of seven riders, back on the climb. After my lap and a half solo attacking I had to sit on a bit for 20 minutes as I recovered, but was soon back to my old self after downing a few hundred calories of maple syrup.

By lap three we were down to five of us, but were soon joined by two more that had bridged from the field. The gap to the peloton ballooned from there. By the last lap it was just me, Tom Zirbel of Optum, Ian Burnett of Jelly Belly, Ian Holt of Natural Grocer, and  Austin Vinton of Think Finance. Tom attacked early on the climb while I was on the front, but realizing that I was likely the only one with the legs to follow, I knew I had to close it down. I went immediately without a thought. I was the only one to respond, so it was just Tom and I from there on out. I asked him politely to not attack again, at least not until we had a good gap. He was nice and agreed. He’d also given me a piece of food earlier when I’d run out (I had forgotten half my food at home). What a nice guy!

Tom attacked with three or four kilometers left to go before the base of a small riser. I’d been watching for it out of the corner of my eye, this time making sure to be in the big ring. I got onto his wheel and sat there, content on making it a two-up sprint. The finish was at the top of a small climb, maybe 200 meters long. Perfect for me. 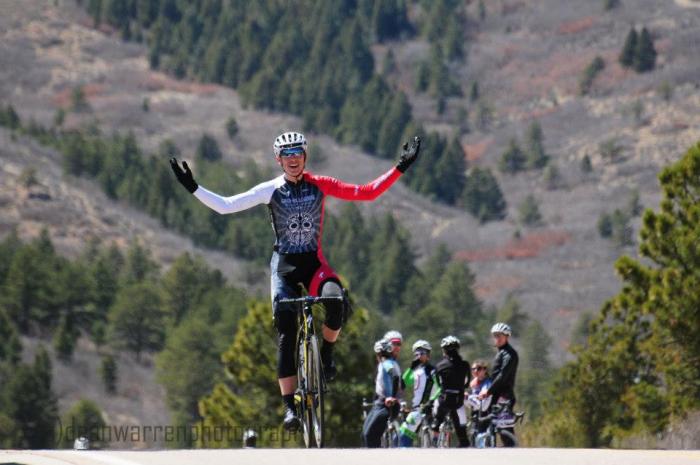 We soft pedaled to the foot of it, him keeping an eye on me, waiting for an attack. At the base he swerved off to the left to force me to the front. I took my chance and gave it full power. I got a good gap and had time to sit up at the top for a victory salute and a smile–my first win since 2010. A long dry spell.

After the race we all went out to Rio for dinner. I’ve wised up since the last team dinner and got the Fajitas For Two. Up next is Sea Otter, which I leave for on Wednesday. It’s currently blizzarding outside and will be doing so for the next two days. We’ve already gotten a foot and a half today. Good thing Steve Fischer decided to come train here for Gila.

3 thoughts on “Recent races and stuff”