You won’t hear from me for a couple weeks cause I’m headed to Ecuador and then the Galapagos!  I may befriend a pack of sea lions and turn to the sea for the rest of my years if the mood strikes, and if so, wish me luck in my new life.  It will be a life of leisure and fun-filled afternoons of diving for Mackerel and lounging in the sun on the rocks by the shore.  Yes, flies will buzz in my eyes and I won’t have fingers to brush them away, but it’s a small price to pay in order to bounce beach balls on my nose and bark at my fellow furry cousins with fishy-odder on my breath.  I’ll practice my hydrobatics in kelp beds and live with the constant sounds of sea birds and ocean waves in the background to lull me to sleep each night.  Then, on one fateful stormy day, an obese fisherman in red waders will come to my colony and let out an evil laugh before yelling in a southern slash scottish accent, “Yee sea lions done et me fish and I won’t have no mare of it.  So I come here to rid yall of yer horidness and do the Bumble Bee canned tuna company a favor!”  At that he’ll whip out two shot guns from under his trench coat and start firing upon my brothers and sisters in a maniacal surge of hate and frustration.  As the fisherman is firing in slow motion, with shells popping out of his smoking guns, the camera will slowly zoom into his crazed yet hurt eyes, become blurry and fade to white as the sound softens until all we hear is the gentle tune of ‘rock a by baby’ song by a middle aged scottish woman.  The picture will come into focus slowly and we’ll be left with a cozy scene of a mother and her baby in a pink room with sunlight shining through the round windows.  SLAM.  The sound of a heavy door cracks the peace of the nursery room and the mother jerks out of her loving trance.  The baby starts to cry and the mother tries to get it to be quiet.  “Dag gummit!! I done had it with the sea lions!  They dun ate a hole in mah’ net and ated the bellies of meh’ fish again,” the drunken man slurred.  He’ll come into the room and take out his frustrations on his wife, but since this movie is PG-13, they will only show the shadow of him struggling with her on the wall.  He’ll eventually leave her crying on the ground, and we’ll see a black eye and our hatred will grow for the drunken fisherman who we assume is her husband.  Over the next few minutes as years pass and the baby grows up, we’ll come to realize that the baby is the fisherman in the red waders and see that he’s turned into his father–a drunk, scottish/louisianan mix of a slob fisherman, unwilling and too ashamed to admit his own weaknesses as a fisherman and instead blame his poor luck on the marine life of my mammalian family.

Back to present as he fires on us at the sea lion colony: luckily we’ll scatter off the beach before the camera shows any of getting shot, but in the confusion I’ll be separated from my family and get caught in a net that the fisherman’s deck hand throws into the water.  I’ll be taken away from my home of the Galapagos and sold to a competetor of Sea World, except they won’t treat me well and I’ll be forced to preform 3 shows a day.  They won’t feed me enough and the kids will bang on the glass and scare me while I also live in fear of the handler’s billy club, which is used on me behind closed doors when the spectators can’t hear my barks of agony.  Months will go by, years will pass.  I’ll loose that winning spirit I once possessed and my existential outlook on life will be clearly seen in a close up of my eyes as I lay in a corner of my cage, tears streaming down, my whiskers bent and broken, my flippers scarred and my ribs poking through bare patches of my mangy fir.  But there’s hope.  The next day, a power outage–caused by the dingy park’s inability to pay it’s electricity bill, causes confusion during my nightly performance.  The crowd will start screaming in confusion, running for the exits of the circus tent.  But the elephants will break that one big pole in the the middle and the whole thing will come down on top of everyone’s heads.  Everyone’s all right but in the comotion and pandimonium of it all, I’ll seek out my handler and bite into his jugular with my canines.  He’ll scream in agony as the blood in his body spews from his neck in a red fountain of steaming pain.  My revenge complete, I’ll slip out of the tent with the still-screaming spectators and waddle-run my way to the nearest ally way.  My next few months will be spent as a street-seal, living on the sidewalks in cardboard boxes and begging for money by performing cheap tricks with an old basketball.  The living will be tough and depressing.  At first the audience is expects that the escape from the circus aquarium will be the turning point in the movie, my freedom once again gained, but it will not be so.  I don’t have any skills, other than balancing balls, sticking my tongue out, and barking on command.  I don’t have any job or communication skills and I’m addicted to herring.  So I live on the street in loneliness and pain.

One rainy evening, I’ll look up into the sky and yell (in Sea Lion) “WHYYYYYYYY?  WHY ME SEA LOIN GOD??  WHAT DID I DO TO DESERVE THIS??”  Thunder cracks through the sound of pattering rain on the city sidewalk and an image of a giant old sea lion will appear in the night sky in a cluster of clouds.
“You must find your own way, Kennett the Sea Lion.  You must seek out and explore new life and civilizations.  You must go where no sea lion has gone before.”
“But I’m not strong enough.  I can’t do it!” I’ll yell in desperation.
“You must.  It is your destiny,” the sea lion in the sky will say.  And with that he’ll fade away, echoing “you must find your own way…”
I’ll fall to my knees, crying, and yell, “Waaaaaiiiiittttt….you never told me what you’d do for a Klondike Bar!!!!”

The next morning, I’ll make my way to the city docks, this time not looking for my herring fix.  This time…it’s to the sea.  I’ll grow the courage it takes for me to plummet back into the blue water and face my fears, returning to the ocean to duel with the crazed fisherman.  The long swim back to the Galapagos, to fight him, will wipe away the pain and suffering from my years in captivity and living on the streets.  Images of my family of sea lions will flash through my brain as “Eye of the Tiger” plays in my montage journey back to my home islands.  I’ll train along the way, gaining strength and befriending a hammer head shark named Julia.  She and I will meet while both hunting a school of fish, but upon seeing me, she changes her plans and takes off after me, preferring a meal of seal.  I’ll flee, twisting and turning underwater at high speeds.  I’ll thread the needle of an enormous anchor at the bottom of the sea floor and she’ll follow but get stuck.  After uselessly struggling for an hour, she’ll ask for my help and I’ll push her out.  Now in debt, she’ll accompany me on my journey even after I’ve told her I don’t want her help. She stubbornly won’t accept this, and follows me anyways.  At first we’ll fight and argue, but with time we’ll warm up to each other on the long journey.

Finally, I’ll reach the Galapagos and the evil fisherman, who we now find out has captured all the other sea lions in my pack and has forced them to move boulders and swing pick axes in his gold mine. Their heavy chains weigh their thin bodies down. An old sea lion falls to the ground and a slave driver runs over to him and yells in chinese at him to get up, and starts whipping him. Another sea lion will run over to him with a gourd of water, press it to his lips and say, “Grandfather Sea Lion, you must get up. You must get up!” The slave driver will continue yelling in the background while the old sea lion says, ‘it’s my time,’ and slowly closes his eyes and slumps into the arms of the younger sea lion.

I’ll be watching this from behind some boulders, and a fire is lit in my glowing red eyes. I devise a plan with Julia the Shark and we make a daring attack on the slave camp, freeing the sea lions, who rise up and destroy all the slave drivers. The evil fisherman flees for his life, but not before taking Julia ransom. But I’ll catch up to him, fight for her honor as I realize I’ve fallen in love with her, and narrowly beat the captain in a sword fight to the death.

The final scene will show me and Julia the hammer head shark living happily ever after with the rest of the seal colony. The sun will begin to set as the camera zooms out and the credits begin to roll as the song “We Belong” by Pat Benatar comes on.

But if by some chance that doesn’t happen, I’ll be back in two weeks. 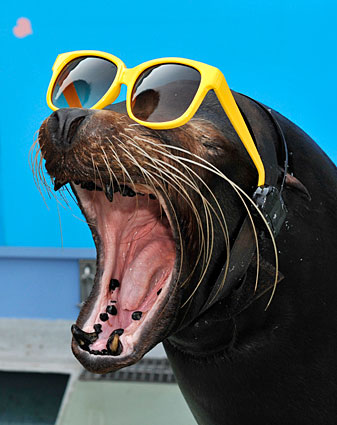 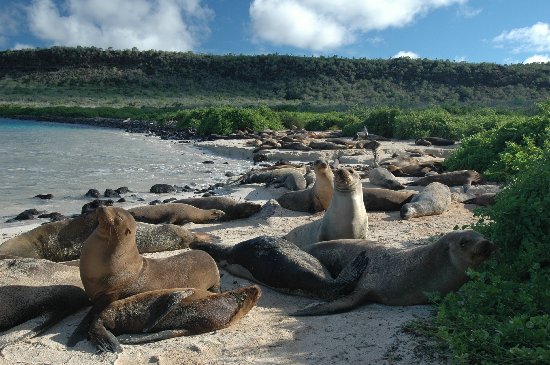 Sleeping on the beach with my colony. 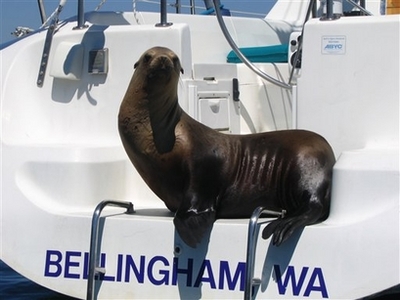 Being taken away from the Galapagos on the Fisherman’s boat.  My life was about to take a drastic dive. 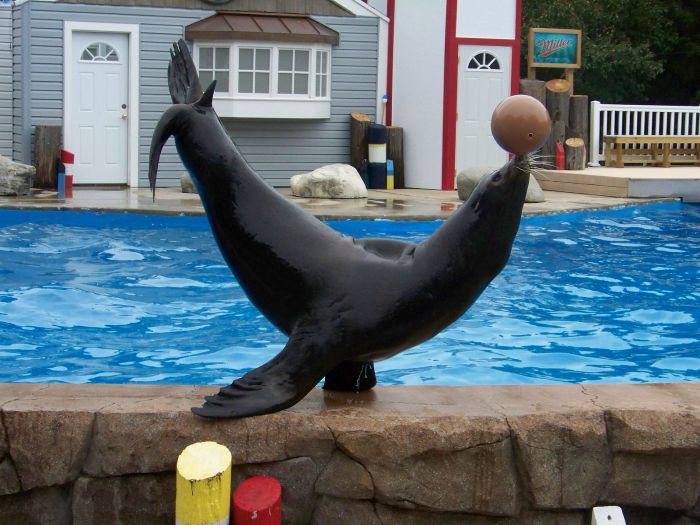 My performance days at the aquarium.

I take my revenge on my evil handler during the power outage as everyone flees the collapsing tent.

Life on the streets, addicted to herring, was tough. I often brushed up against the law.

On my way back to the colony.

The sea lion colony returns to the ocean after escaping the gold mine camp. 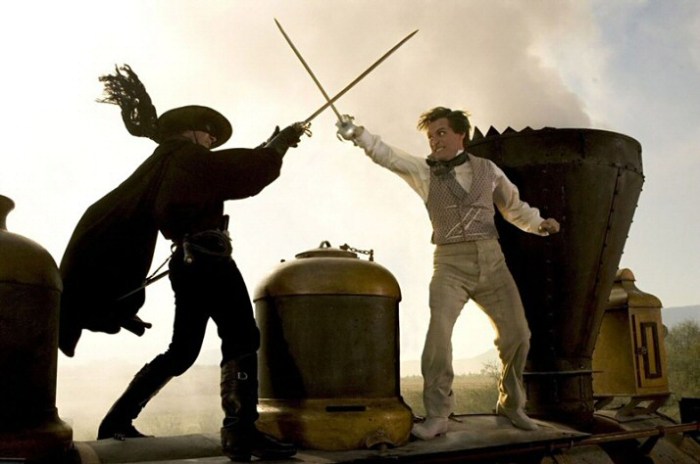 Me, giving out my war cry after slaying the evil fisherman.

We all lived happily ever after.