Adelaide and I first found out about the Wildlife Loop Triathlon—an Olympic and 70.3 distance race in Custer, South Dakota—three years ago on a Facebook ad, which is quite possibly the first and only time facebook has been useful for anything other than political misinformation and identity theft. We were next lured onto the event website, which seemed to be from another era, specifically the mid 1990’s. Neon green typing, mostly written in the first-person, burst from a jet black background. Why this eye-straining and simple design faded out of style we’ll never know. Much of the course description page discussed the various wildlife that one might see on course, with Buffalo being the main attraction. We were enthralled. I’d raced Ironman events almost exclusively, and this low-key family-style event, which would give us an excuse to go to South Dakota—a new state for us both—was strangely appealing. While the website was updated a year or two ago and given a much more modern look, Adelaide and I continued following the Wildlife Loop throughout the years and discussing it as a possibility for a September race. We finally, and wisely, made the decision to drive up to Custer State Park in South Dakota do it a few weekends ago.

With 70 total participants divided between the 70.3 and Olympic distances, transition was small, the lines to the bathrooms were short, and the atmosphere was friendly. No blaring announcements or annoying pop songs disturbed the early morning quiet by the lake. The cool morning air had mostly vanished, as had the fog coming off the lake, by the time the start horn went off at 8:15—delayed to give a participant with a wetsuit zipper malfunction the time to get zipped up.

I was with one other guy Garth, for the entirety of the swim, and would have been happy to just draft off him if he’d been able to hold a straight line. I found myself swimming alongside him instead, though my own inability to hold a straight line helped us draw a DNA strand, if viewed from above, in the water as we went. I felt slightly sick to my stomach throughout the swim, and unmotivated to push myself very hard.

The previous six or seven weeks I’d been struggling to find the energy to train. I’d go out for intervals and find my legs incapable of pushing above high zone two. During an endurance ride a few weeks ago I averaged 153 watts for 3.5 hours. Despite choosing a flat route, I was coasting down tiny hills and even flat sections, two things I never do. My swimming had become almost non existent. I was lucky if I got 4K in a week. I had a few good results this summer, and a good workout twice a week or so, but I’ve felt weak and low energy this entire year, with the last few months culminating in my [near] decision to scrap Kona. Luckily, the Wildlife Loop helped me find my passion again, and Kona—the soulless epitome of corporate hype (some would say) is still on my schedule thanks to this grass roots race.

However, my lack of motivation was most likely caused by something more than burnout. I had blood work done three weeks ago, then more done the week after that, and I believe I might have found the cause of my “illness,” as I’ve been thinking of it. It’s possibly related to my thyroid, and hopefully some modifications to my medication will result in a quick-ish turnaround. It will probably take at least a few months for me to return to full strength if it turns out to be my thyroid.

Back to the race: Garth and I came out of the water in 28 minutes and I began the 10-mile descent out of transition. The bike course wound back and forth at a consistent three to six percent gradient, perfect for feeling fast when you aren’t. By the first turnaround I noticed I had four or five minutes on the next guy behind me, David—who had surpassed Garth—and I realized that I could probably ride somewhat easy and still win.

I ditched that idea when the climbing started. There was a large amount of prize money for such a small event, and winning was of course a goal, but I came here to see if my legs had responded to my new lower dose of hypothyroid medication, and to remind myself that triathlon can be fun. I began hammering up the climbs and found myself enjoying the feeling of going hard, albeit not my normal race power—but still good training watts that I hadn’t been able to do in many weeks. 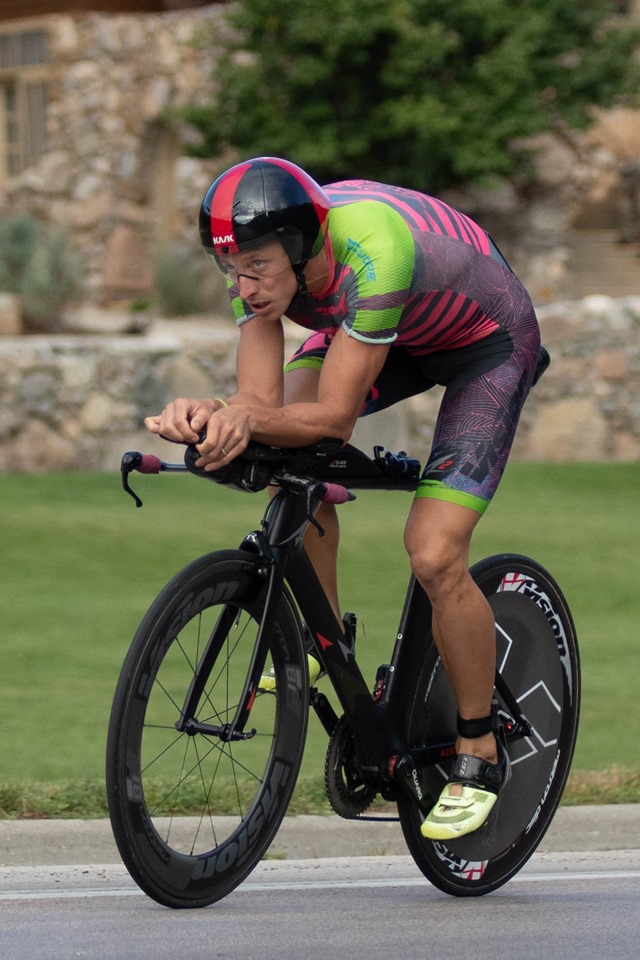 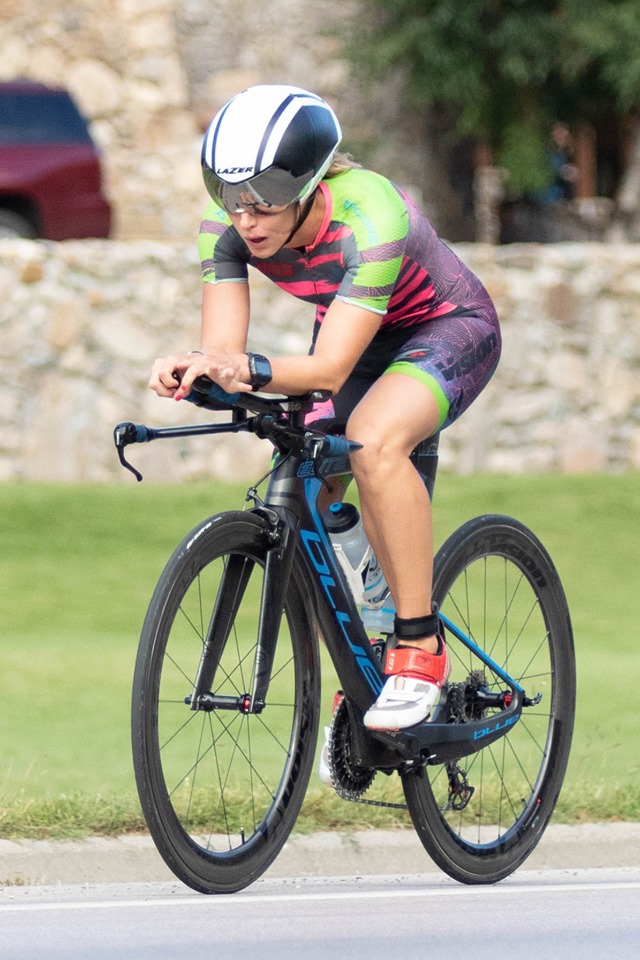 The course had 4,500 feet of elevation gain distributed nicely in moderately steep bumps, rolling hills, and a few longer climbs that kept the entire bike portion of the race interesting. Dark green pines burst from the rocky ground in every direction and the blue sky above was patchy with white clouds behind which the sun attempted, and mostly failed, to hide. I saw a bison at mile 14, and by lap two I set an attainable power goal for myself to ensure that I didn’t let off the pedals too much. I kept enough breath in my lungs to encourage every racer I’d lapped, something else I don’t typically do in races. I climbed off the bike with around 15-20 minutes on David and began the run, which ended up also being pretty hilly and difficult.

Still not willing to push myself too much since I felt like I was just finally getting out of a hole, I ran fast enough to make it a good workout. With five miles done, I missed one of the turnarounds and was chased down by a volunteer in a pickup, who instructed me to run back as far as I thought I’d missed on the turnaround. “Just go back as far as what you feel is right,” is about what she said. I doubled back then continued on for my second lap. I added onto the second lap as well just to make sure I got in the correct distance, and by the finish I had 14 miles on my Polar watch, a mile more than needed.

I hopped back on my bike pretty soon after finishing to go cheer on Adelaide, who had been in 2nd the last time I saw her. She had extended her lead by the time she completed her first lap, and I got to ride alongside her to take some photos as she started her second. It has been a difficult road for her the past few years with her labral tear, and it was awesome seeing her excel once again. She finished in 2nd, followed seven or eight minutes later by Brittany, the lone athlete that I coach. 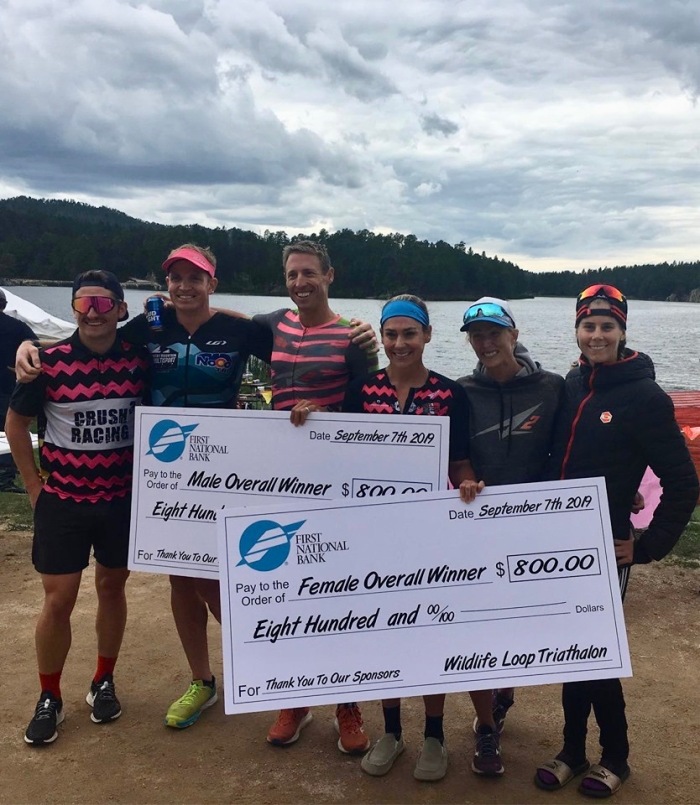 Everyone was in high spirits after the race, recounting tales of buffalo and long climbs. Hot dogs, chips, Bud Light, and Arbor Mist were on the menu, and I indulged in all. Adelaide and I headed back to our motel briefly to shower, then drove the five minutes back to the race to try out our new inflatable paddle boards. We got to hang out with the race director, Brandon, and his mom as we helped break down the transition area. As the sun began to set, Adelaide drove us on the Mt. Rushmore route to see the presidents, who we never did find, before we returned to town for Mexican food. It was a great weekend, a super fun and challenging race, and we’ll be back next year. Thank you to the volunteers, Brandon, First National Bank, and everyone who helped put this fantastic race on!

Are you a single athlete? Given that Kennett and I are coming up on our 5 year anniversary, I don't know much about recent dating apps, but I'm going to offer unsolicited dating advice anyway. Make sure you put in your dating profile that you want someone who will pick up and go for a weekend, travel to a race, and either cheer or participate alongside you!! Kennett and I had a blast in Phoenix for the #rocknrollmarathon this weekend. We don't go for a lot of dates back in Boulder, but trips like this are so special to me. -🥰A
%d bloggers like this: