Training has been up and down and somewhat lack luster since Ironman Boulder. I never felt quite right until around week six. Adelaide warned me that it would take over a month to recover but I didn’t believe her. By the time Boulder 70.3 rolled around (eight weeks out) I had at least gotten a few good sessions under my belt, though nothing that left me feeling like I had the legs to crush the race. I was mainly looking forward to seeing how horribly I’d do in a non-wetsuit swim and, hopefully, slaying the bike leg with Chris Leiferman on his way to what I assumed would be a victory for him (or me if I could pull out an amazing run).

I had a moment of panic 10 minutes before the start when the zipper on my swim skin got stuck, then broke off in my teeth when I decided pure force was the right choice. I rushed around trying to find a pair of pliers with no luck, then managed to get it unstuck when I applied even MORE force. More force is always the answer, and would be my saving grace later in the day. Despite this moment of panic, I started the swim out with relatively low stress levels. I positioned myself on the outside behind Ben Hoffman and Robbie Deckard, two guys faster than me but hopefully not so fast that they would immediately drop me.

They immediately dropped me once the start gun went off. I spent the next few minutes veering from the very far left to the very far right of the pack, cutting people off and unintentional causing chaos until I finally found a pair of feet that suited my needs. I’ve come to realize that I have a strong leftward veer when I breathe to the right (my preferred shoulder to breathe on) and an even stronger veer to the right when I breathe to the left, my bad side. As long as I’m on someone’s feet, I can control the veer, so I sighted through the murky brown water to a pair of albino feet furiously kicking and stuck on for the rest of the swim.

The fecal mater water of the Boulder Res. never treated me so good or tasted quite as sweet as it did on Saturday morning when I was rewarded with a very decent swim time. I came out, unbeknownst to me, in 27:20, a solid non-wetsuit, altitude swim time that netted me 21st place. Sick. More importantly, I was only 2.5 minutes down on the leaders (Andy Potts and Josh Amberger) and I was just a second or two behind Chris.

Onto our bikes, Chris and I made short work of everyone around us and by mile five we were in 11th and 12th, quickly eating into the time gap ahead. I told him I “wasn’t feeling very good” and that my legs were “blocked” but I think he heard that I “was feeling good” and that my legs were “ready to rock” because he drilled the next few miles while I hung on for dear life. I came around again on Neva and by then my legs had started to feel decent. We hammered up to 36 and down Nelson, catching and quickly passing more guys as we went. Pretty soon we had passed and dispatched Hoffman and Tyler Butterfield and were making our way up to Amberger and Potts. 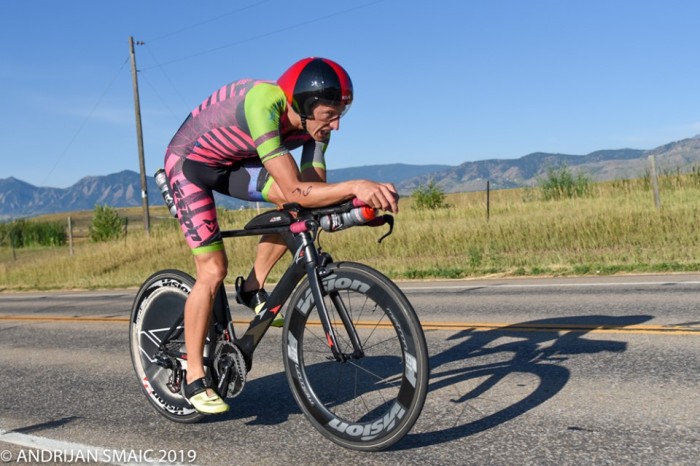 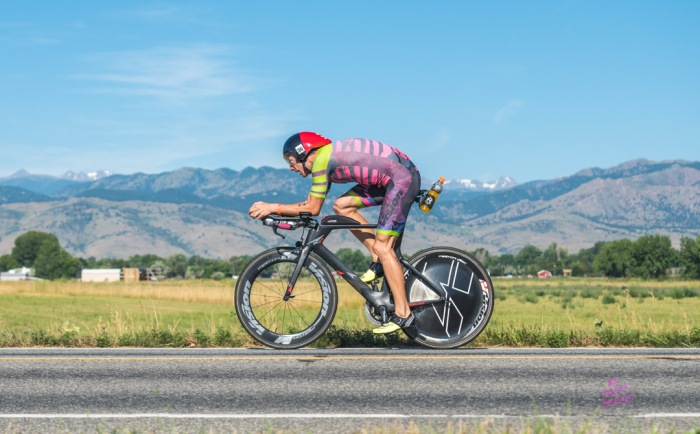 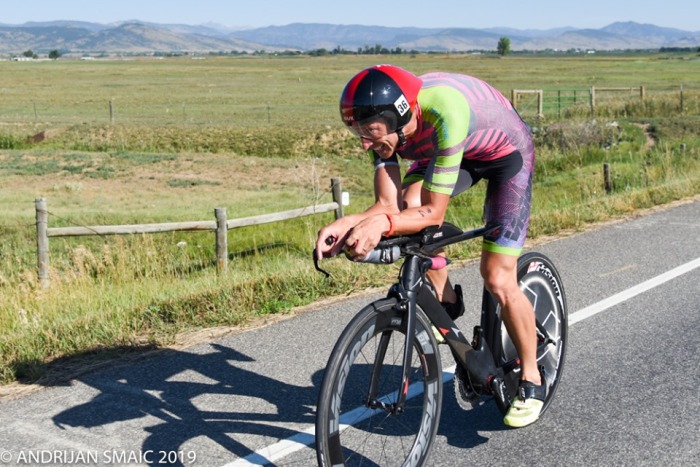 We made the catch at the top of St. Vrain, about 30 miles into the bike leg, and I breathed a moment of relief before I went around and tried to break away from those two. Looking back, I saw that Amberger and Potts were still there, so I sat up. Chris came by and suggested I settle down a bit and not blow myself up before the run, so I drifted to the back of the group. Unfortunately, when Chris went to the front he pretty quickly gapped Potts, who had moved up to second wheel at that point, and I watched in frustration as Chris’ gap grew to 30 seconds by the turn onto 75th in just a few short miles. I wasn’t about to chase him down, fearing that I’d just pull Potts and Amberger with me, so I waited until Potts ran out of steam and Amberger finally went to the front. The timing of this was perfect, as it coincided with a couple tiny rollers—all I needed to pull away from them.

Chris doing what he does best, destroying hopes and dreams. Photo: Andrijan Smaic

I went hard but Chris was already over a minute up the road and I didn’t think I’d be able to catch him. I held steady for 10 miles, then in the last five or six miles he put another 45 seconds into me. I wasn’t worried about that gap though. 2nd behind Chris was fine by me. My focus was on getting as much time on Potts and Amberger as I could. By T2 I had a minute on Potts and two on Amberger—I wasn’t confident that would be enough.

Even before I exited transition, my chest was giving me serious breathing/cramping problems. “This is why I stopped doing this fucking race,” I reminded myself. I staggered along at 7:30 pace across the reservoir dam waiting for my chest to calm down so I could run hard. I groaned, wheezed, and cursed as I went, letting the anger wash over and dull the pain in my intercostals. It eventually worked and I was able to pick the pace up to 6:15s and low 6:20s. “Not great, but it might be enough to stay in the top six for a pay day,” I tried to reassure myself. Yet, the chest cramping wouldn’t fully go away, and if I tried increasing the pace the stabbing sensation intensified.

By mile three I was confident that my race was doomed. Potts was 100 meters behind me and I was sure that others were about to start the process of mowing me down as well. I knew that once I was off the podium my motivation would fall apart and I’d be consigned to just jog it in. I tried to stay positive as people shouted my name but it was rough going. I surged, slowed down, and surged again temporarily only to resume my previous pace. I couldn’t shake the chest cramping and my breathing was too ragged to get sufficient oxygen to my legs.

Tyler flew by at mile five or six like I was walking, no standing, no walking backwards, no like I was a dried up corpse being cartwheeled backwards by the wind like a tumble weed. “Good job Tyler,” I squeaked when I finally realized who he was. I don’t have much memory of the next few miles, but I do remember being angry and then depressed, then feeling utterly doomed. I learned that Potts was about to catch me at mile eight before we turned onto Monarch, a straight and slightly uphill drag that I’ve done many intervals on over the years. It’s hard to run fast or confidently up it during the best of times, and this was not the best of times. I knew that anger and stubbornness would be my best weapons at this point, so when I heard him get on my shoulder I surged. I slowed and he was on my shoulder again so I surged once more. I did this until we got to an aid station, where I drenched myself in water and surged again, this time harder and more sustained, finally breaking away by a few meters.

Photo: Kenny Withrow (@itskennywithrow)…Thank you for photoshopping out all my slobber and snot Kenny.

Andy Potts coming in for the kill. Photo: Kristin Cummins

The meters turned into….uhh, more meters and from there I quickly built a gap, my chest finally feeling good. However, I wasn’t confident that I had 3rd sealed up. I continued looking over my shoulder for the next 20 minutes expecting to see Potts or someone else about to role me, but no one was in sight. I ended up running the last 3.5 miles at 5:50 pace, which was quite a bit faster than I had been running earlier, and I wish I’d been able to run that fast the whole time (Tyler would have caught me anyways though). 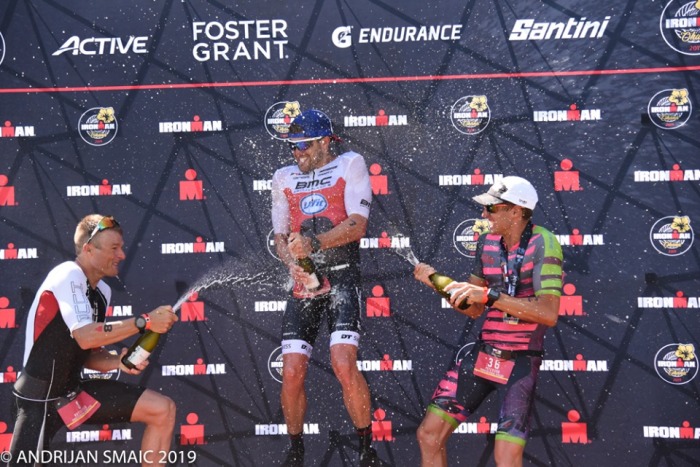 My favorite part of the race was putting the torch to half the field with Chris, trading pulls like a training ride, and seeing him take the win after a very long, frustrating bout of injuries that I was worried would either keep him from racing Kona or force him to quit triathlon altogether. It appears that he’s back and that his run will only improve from here. As for myself, the only thing I was confident in before Boulder 70.3 was my run, and it ended up being (sort of) my weak point. I was pretty happy with the swim, and even though I made a tactical blunder on the bike, I still had good power and averaged just under 29 miles per hour (the bike course is not short like it was a few years ago). My mental game has improved a lot in the last year or two as Adelaide pointed out, and that’s probably the most important takeaway from this race. Even a year ago I wouldn’t have been able to hold Potts or someone else off late in the run while feeling that bad.

Next up is the Wildlife Loop Triathlon in South Dakota in five weeks—a 70.3 with a tough course in a beautiful location. Adelaide and I are both racing it, and it would make a great late season event for anyone in the Front Range who doesn’t have a race on their schedule for September. As part of my Kona build, which officially starts now I guess, I’ll be blogging once a week about training and life like I did for Ironman Boulder, so stay tuned for some monotonous training reports with the odd poop joke thrown in for good measure.

As always, I have a big thank you to my wife Adelaide, my sponsors A-Squared Bikes, Vision Tech USA, iKOR Labs, and Maurten nutrition, as well as everyone out there cheering, volunteering, and working the race. And thank you to the hound, Maybellene.