I prefer to call it Exercise Dependency. It’s a bizarre condition, if it can even be called a condition, and it’s something that not a lot of people are able to relate to. The avid elliptical user might feel a bit off if they miss a week in the gym, but I doubt that it would send them into a downward spiral of depression. For elite athletes Exercise Addiction is something that a lot of us most likely have to deal with at some point, though I’ve never heard anyone talk about it.

I stole the following from Wikipedia.

Five indicators of exercise addiction are:

Key differences between healthy and addictive levels of exercise include the presence of withdrawal symptoms when exercise is stopped as well as the addictive properties exercise may have leading to a dependence on exercise.

I meet criteria #2, #3, and #4 and have dealt with #1 and #5 in the past. The issue I’m going to talk about has nothing to do with confronting the addiction or seeking help to wean myself of the euphoric state that exercise gives me. I’m fine with being addicted. It’s a healthy(ish) addiction. The problem I’m going to talk about and the issue I’ve had this year is not getting enough exercise, which leads to serious withdrawal symptoms.

The more attention I pay to my moods, the more I’m aware that they correlate directly with my weekly training volume. If I miss a day or two of training due to the aftershocks from Adelaide’s crash, I’ll become even more upset, lose desire to train later in the week, feel even worse over the next couple days, and become completely unmotivated and depressed by the weekend. It’s like a junkie not getting heroin, except instead of eventually getting over the addiction, I just feel worse and worse as time passes.

I wouldn’t call the depression that I experience life threatening by any means (as in suicidal), but I definitely get so low that I can’t see a way out of the hole, and life does seem meaningless. A lot of the time it feels like no matter what I do, no matter what happens in life, I’ll never be happy again—even if someone stopped by my house to give me 100 million dollars and the ability to piss refreshing, ice cold Surge.

The only thing that relieves that feeling of hopelessness is training. If I’ve been in a real bad place, a few days of riding won’t even cut it. I’ll need a week to get back to feeling decent. Two weeks to feel happy. And with the passing of years, I’ve needed more and more exercise to feel whole. Sixteen hours a week of hard riding seems to be the absolute minimum. 20 is better. 120/month, I’ve found out, is too much and falls into the category of “excessive or detrimental to health.”

Looking back on my life, it’s apparent that I’ve had this dependency to exercise ever since I was a kid. On the rare occasion that I had a week off of whatever sport I was doing at the time, I remember my dad telling me that I was acting upset and that I should just go for a run. Sometimes I’d continue to mope about, but usually I’d take him up on it and feel better almost immediately. Before I reached the double digits in age, my dad and I would go on 10 mile runs up Parret Mountain behind our house. And it wasn’t like I was even training to be a runner or anything at that point either. Just a 10 mile run with 1,100 feet of elevation gain for the hell of it. I’m pretty sure I was an abnormal child.

Along with the normal sports kids do like soccer, track, and white water kayaking, I also did a lot of martial arts. In middle school I’d rollerblade to the bus stop, take the bus to the dojo, and do four hours of training starting with the kids’ karate class, then jiu-jitsu, then Muay Thai kick boxing, and finally the mixed martial arts training session at the end which ended at 9PM. The last couple classes were almost solely attended by adults and I got my ass kicked for years before I was big enough to start inflicting damage of my own. At home I’d hit myself with a metal pipe to condition my legs, arms, and torso. I eventually fucked my thumbs up so badly from punching that I couldn’t open a car door for half a year. They’re actually still tender to this day.

While that last passage shows the obvious downside to exercise addiction (over doing it), the other side of the coin (under-training) leads to a much darker place, for myself that is. So contrary to what every sports science book, training article, and coach will say, when it comes to working out I’m fine with erring slightly on the side of too much. Results can come second to my mental health.

Aside from not getting enough exercise, there’s another factor that has contributed to my depression this year. It’s underperforming in races and having poor fitness. I don’t feel like myself when I’m not strong on the bike. It’s as if I’m missing part of myself.

Despite that feeling of inadequacy, the lack of success in races is still a lesser issue than the lack of training itself. Feeling strong and winning races is a huge mental boost, but simply stroking my ego isn’t enough. I’ve had plenty of bad years on the bike before and never felt as down as I have lately. That’s because back during those years I was training a lot and had a sense of accomplishment just from that.

As further proof, to myself, that training is the key factor when it comes to feeling good, this year I’ve had a lot of immediate success and recognition in triathlon that hasn’t made me happy for more than a couple days after the race–essentially just enough time for the endorphin tank to run empty.

Exercise Addiction seems like a ridiculous ‘disorder’ to have. It’s well beyond a first world problem, and quite possibly dips down far enough to be a -1st or -2nd world problem. But chemically speaking, if my brain needs X amount of endorphins and it only gets half that, I’m not going to be happy. Simple as that.

I’m lucky that I’ve always had athletic outlets and grew up in a family that’s been so supportive of them. Without sports, I’m sure I would have been prescribed antidepressants a long time ago. Fully realizing the issue and being able to address it will hopefully lead to less time being depressed. It takes a lot of energy to start training hard again once you’ve been off the bike for a while, but training is the only thing that’s going to fix the problem. The last three weeks of hard riding, running, and swimming here in Boulder have completely turned my mood around, and seeing my fitness slowly return has added to the fire in my belly. This is the most normal I’ve felt in over a year. 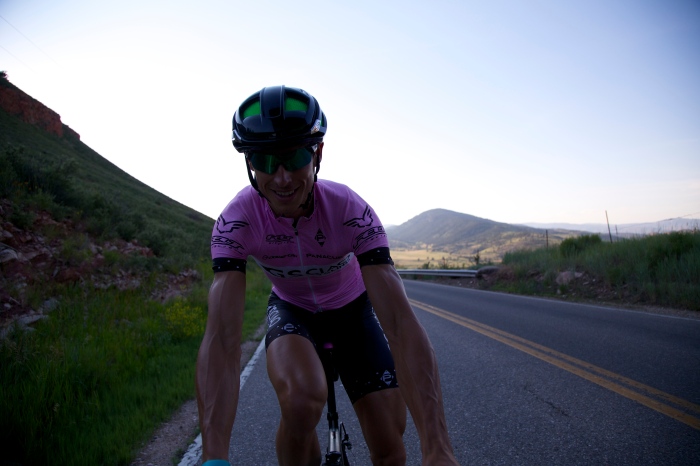 One thought on “Exercise Addiction”