From where I left off, the trip got slightly worse before it got better. Bookending two races during a month-long trip was not the best of plans, especially since we didn’t know what our home base conditions and the terrain for training would be like along the way. Unfortunately we only ended up doing six or seven super short rides during the month, which zapped a lot of the fitness Adelaide had prior to our departure. Despite that, Adelaide finished the Vineman full in 12:14, coming in 4th in her age group and 7th female overall. How she did that with so little training leading up to the race I’ll never know. I had ridden a little under half the course the day before her race and was utterly destroyed by it. When you’ve been off the bike that long, it’s hard to do even zone two.

Most of our stress from the trip was from attempting to train and getting shut down. I had trouble sleeping at times as well, which didn’t help things. But the more we stressed about not being able to train properly, the less fun we had, the more frustrated we got, and the less energy we had to train with the terrain we did have.

Instead of doing a long write-up of the second two weeks of our trip, which would take hours of my precious time, here are some pictures with captions. Since the internet is essentially a picture book for adults, I assume you’ll all enjoy this more than a 3,000-word essay anyways.

We drove down to Walnut Grove the day after my race, which is about 45 minutes south of Sacramento, to stay with my cousin Chris for just under two weeks. It was about 100 degrees every day and ample black berries hung ripe from vines for easy picking. The three of us kayaked, played Monopoly and pingpong, made some great dinners, and ate out on the patio every night. The only thing missing was the riding, which was non existent in that area. And I can’t seem to stress how important being able to ride is to me for mental well-being. Even more so for Adelaide, who had the race quickly approaching and legs that needed to be moving. However, the river was a mere five minute walk away. So we swam as much as my shoulders could take, and got some good runs in too.

This was one of the worst rides we’ve ever been on. After an hour-long drive to get to Antioch in our attempt to find good roads to ride on, I got three flats and ran into a parked car. And that was just the first 45 minutes. At least we got Dairy Queen afterwards. (And then spent an additional 45 minutes driving through town searching for a place to get cash after being turned back at a toll bridge).

Though, Maybellene was content, with a large yard to run around in and watermelon rinds galore.

My aunt and her dog Buddy are top competitors in agility training, so we thought Maybellene should try one of the obstacles in the back yard.

We had zero success.

Sushi making with my cousin Chris.

Adelaide doing some studying for the CSCS exam on the dock.

We headed south the the bay area to spend a few nights with one of my old friends Mike. Snaps was the third cat Maybellene has met. The first scared her so badly she peed on the floor. The second she chased up a tree, and I had to climb up and rescue it because it got stuck at the top. This was a happy medium.

The pre-race dinner with our friends Krista, David, and their friends, almost all of whom were racing. I ate more than anyone else by about four magnitudes and all I did the following day was watch them exercise while I sat in a lawn chair feeling like a fat tub of rancid lard.

A few days before, we’d picked up our friend Lindsey Knast (sitting behind Adelaide in the photo) from the airport and driven up to the Motel 6 in Santa Rosa. I finally had some roads to ride on and our spirits did a 180 after being around Lindsey, who was excited and upbeat since she hadn’t been living on the road for a month. 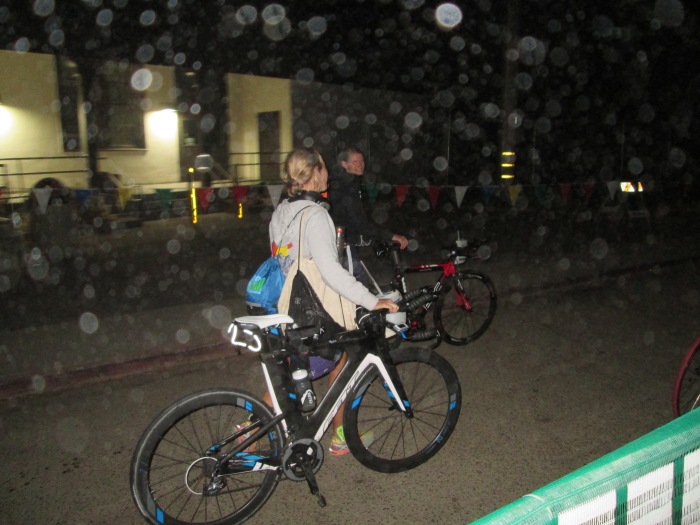 Finally. Race morning with a bit of fog.

Somehow this was the best picture I could get of the two of them. My photography skills are renown as my knitting abilities.

A few seconds from the start.

Fast forward 7 hours later to T2. Adelaide was the third woman out of the water but lost some ground on the 112 mile bike leg. Now just a marathon to go. Easy as pie. 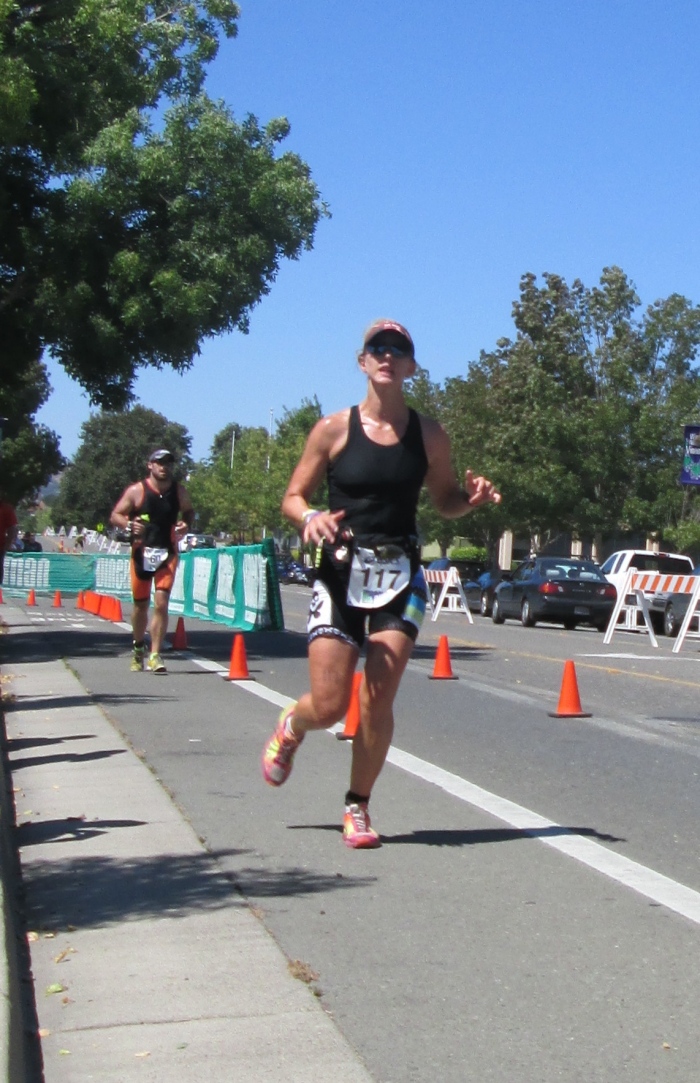 I think this face was, “Holy fucking shit this hurts.”

Sprinting past some fool with 100 feet to go.

It might not have been the time she’d hoped for but I was super proud to see her finish it off. She was just 30 seconds behind 3rd place in her age group, which was sort of a blessing in disguise since that meant we didn’t have to go to the awards ceremony the following day.

That’s a wrap. She curled up in bed without puking and managed to eat some fries before falling asleep. We visited the beach and then my grandparents the next day, then spent two days driving home to Boulder. It’s good to be back.

2 thoughts on “The second half”