That is, assuming someone gets me on a gall dang team for Redlands gosh darn it all! Jeez lo-wheeze, dag nab it. Okay that’s the last time I beg and plead about it, shoot. Sorry for all that dirty language. I have a foul fucking mouth I know.

If I can’t do Redlands I think I might get one more race weekend in Colorado at either the Front Range Classic or the Louisville crit before heading off to Sweden. Either way, Redlands or no, I have zero real complaints in life these days. It’s pretty awesome to ride every day and race all the time, even if I’m living off a dime (yeah I rhymed that on purpose). To all the idiot pros out there that say, “it’s just a job,” shut the hell up. Working in a toll booth is just a job. Typing on a computer all day is just a job. Waiting tables is just a job. This is a privilege and I won’t forget it.

I hate it when someone starts out a sentence with “so.” It does nothing except increase the word count, which I’m not wholly against as you can tell by this completely off-topic, unnecessary paragraph. Tacking on ‘so’ to the beginning of your sentence adds no value to whatever it is that you’re trying, yet failing, to say. Yet, I catch myself doing it all the time. Usually I go back and delete it, but sometimes it slips on by. So from now on if you see me doing it, please let me know.

Okay, onto the races. The first was the Candelas circuit race, which is put on by the CU cycling team. It’s an out and back race that goes up a hill, down a hill, repeat. We were slated to do 11 laps, but then this happened and they shortened it to 9:

I received many compliments about my googles. They worked perfectly. And no, I was never cold during this race, despite how miserable it looks. In fact, at one point I even tried to unzip my jacket a bit to cool off. No joke. Photo courtesy of Dejan Smaic of Sports Images, who looked to be having as much of a blast out there as us.

The snow was no surprise since it had been coming down for hours before the race started. But what I didn’t think about happening was this (the bike freezing up): 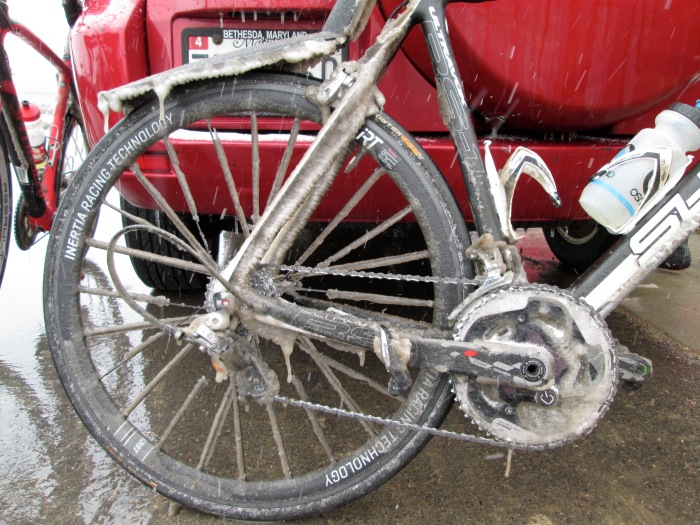 Even by the first lap I’d already lost the use of my cassette’s 11 tooth cog. More would come.

I set a hard pace up the second pitch of the climb on the first lap and got away with one other guy briefly, then it was just me until mid-way into the descent. A different rider bridged up, then we were both caught on the climb. I got away again, this time with former teammate Nick Bax of Rio Grande. I figured this was the race, done and over with. The field, which was small to begin with, was in tatters and the first chase group’s impetus looked to be waning.

We could see them every time we rounded the U turn at the top of the hill and passed them by, going the opposite direction. And when I say ‘see’ I mean we could peer into their quickly fleeting souls and smell the figurative blood from the gaping wound we’d gleefully torn. Making eye contact with your prey like that is the ultimate satisfaction because you get to witness the damage you’ve done from the front instead of only hearing it from behind. The stare down went both ways I guess. And for that matter, we were the prey, not them.

We got caught a few laps later by a group of three that contained Matt Gates of Rocky Mountain Cancer Centers, Taylor Shelden of 5-Hour Energy, and Jon Tarkington of Natural Grocers. Once they caught us, the carrot having been consumed, the pace slowed down quite a bit. It didn’t look like the next larger group behind had a chance of catching us, so we all shared turns grinding out a slogging tempo in the hard-blowing snow, losing more frozen gears with every passing minute.

It must have looked like a junior race on the downhill, with everyone quickly spinning out in their 18-tooth cogs and tucking. And on the way up it probably resembled a master’s race with everyone slowly grinding away at a cadence 40, cross chained in their big ring…that is, if you were lucky enough to have access to your big ring. I lost the ability to shift to my small ring half way into the race, while I heard that others got stuck the other way around.

While everyone was certainly losing gears with every lap (the last time up some only had a single working gear left), I think I was the only one with a malfunctioning steer tube. I’d had this happen throughout the winter when it would be that perfect temperature where the pavement was 33 degrees and wet, and the air temperature and my bike were below freezing, meaning the thing would end up resembling a nasty popsicle (see above). The water gets down into the steer tube, expands as ice (Science Rules!), and seizes up the front end, making steering difficult and eventually impossible. On lap two I’d nearly crashed into the cones at the bottom of the hill and taken Nick out in the process. After that I took every corner at about 4 mph.

With two to go, Nick attacked our group. I watched him go and could have and really should have followed him. But it was a cross headwind on the climb and I felt that the other three guys were plenty motivated and strong to keep the gap in check as Nick flailed away, wasting energy in the strong wind. I wanted to attack with a lap to go, not two, since I thought I’d play things conservatively for once. Stupid me. Nick suddenly had a gap of 22 seconds by the top of the climb when Taylor climbed off his bike since he had no working gears left.

It was up to me, Jon, and Matt to pull Nick bax. Get it? Pull Nick bax. Like we’re pulling him back except I replaced back with Nick’s last name, which is Bax. Oh man. Good stuff right there.

Jon and Matt were dying a bit and I realized that I’d left things way too late. Nick now had 35 or 40 seconds and his gap was still growing as we began the final climb. We slowed down half way up the climb, silently and secretly watching each other. I attacked on the second steep ramp and dropped Matt and John but only managed to close half the gap to my former teammate by the top. Nick soloed to a well-deserved win and I took 2nd. That makes 3 second places this year already. Ughhh.

Oh well. It was good to see a friend win and I came away with some cash and seven pieces of pizza from Papa Johns that, for some amazing reason, decided to stop by with a bunch of free pizzas. Plus, this race had probably the best ever registration/post-race hangout lounge imaginable.

Nick and Camillo warming up with cold pizza and a hot fire.

The second day of racing at the Stazio crit was, for me at least, much less memorable, though still a good day and a fun time. It was also like 90 degrees warmer and sunny, which I had no complaints about.

I showed up early to watch the finish of Adelaide’s race only to find out that just a lap before I got there, they had a bad crash that called for the race to be neutralized and an ambulance to be sent.

During this fiasco, I realized that I needed an ambulance, so to speak, for my bike. The shifting had just stopped working when I rolled into the parking lot, due to all the road grit from yesterday’s race. Luckily, a mechanic traveling with one of the collegiate teams took it upon himself to completely overhaul everything. Turned out that while the cable and housing were definitely gritty, the real problem was actually just a worn out shifter. My bike, with its components from last year (yes a FULL year old, oh my god!) is falling apart. Components these days are not meant to be raced and ridden hard for a full year, which is sad and pathetic in my point of view. While I do usually have what appears to be a fairly dirty bike, I clean the drivetrain every day and replace the cables and housing every two months. That’s more than anyone I know. Still, the shifters are completely shot, I’ve broken and had to replace my front derailleur, rear derailleur, and two brake calipers since last March. Plus I went through what, five frames last season? Those were mainly due to changing teams and whatnot, except for the frame that I broke in a crash. I’ve spent a small fortune with bike upkeep in the last year and I’ll be heading to Europe with a bank account that will allow only rice and beans. I’m fine with this though, since having races in the legs, a working bike, and a fast set of wheels is crucial for success. Even more so than being able to afford kale.

The crit got underway. I followed some attacks but was always on the back foot, chasing and bridging instead of being there when they first got away. My legs felt fine, but I somehow managed to miss the winning move of 10 guys half way into the race. I tried to solo bridge up there as it went but only made it half the distance. Throughout the next 20 minutes I took some pulls and yelled at some people (sorry) to get out of the way if they weren’t going to help pull through. Of course no one was, since half the teams had someone in the break and the rest were all too afraid to stick their noses in the wind for two seconds. Josh Yeaton of Horizon easily won out of the break, which finished 20 seconds ahead of the bunch. I sat up before our field sprint since I didn’t feel like risking a crash for 11th place. It was a good workout at least. Afterwards, Adelaide and I went to Sprouts, then I sat in the sauna for the 4th day of my Osmo heat training protocol (for San Dimas). Two to go. It’s getting easier.

Oh, and one last thing before I wrap this post up. Thanks to Clif Bar, I’ll be supplied with race food for a good part of the season. They obviously don’t need me repping their products to increase brand awareness or make a profit for 2014. It makes me pretty happy that they’re willing to help a little guy out just to be nice.