And the prognosis is: I’m slow as fuck. Maybe not quite that slow, but pretty close to it. Maybe as slow as some hot, wet foreplay. As per usual, I’ve over inflated my ego and came down here expecting to win. Win big at the UofA crit and Oracle road race. What was I basing my form on? I’m not sure, but I guess my own Strava rides and the form of other guys who’ve been riding in the ice. Sorry Boulderites, but we’re WAY out of shape compared to the southern belles down here in Arizona. Yes, the Gateway ride is sorta fast at times, but dang the Shootout must be cookin right now because these boys is on fire! My only consolation to getting my ass pounded this hard is that it’s only February. I hate it when people use that lame excuse “well it’s only December,” “well it’s only February,” “well it’s only July.” Eventually you need to be fast. When? At races. This weekend had races, so to the winners: good on ya’ mate, as they say in Sweden.

After a hectic Friday, which was my last day of work, Adelaide and I flew down to Tucson late at night. We timed it perfectly, right in between Colorado’s stupid snowstorms. Quinn Keogh picked us up in his sweet liveable Elk Van with a bed in the back, dark curtains on the windows, and a sign that says free candy if you’re under 48 inches. (48 inches tall, get your mind out of the gutter).

The instigator of this trip was Adelaide, or more accurately, Adelaide’s desire to have me at her first race, you know, to give her sound tactical advice.

Saturday at noon: I spent a lot of time yelling at her from corner 1 to stop pulling and get off the front. She spent 20 minutes of her 30 minute crit dragging the remnants of her field around, only to be out-sprinted in the end. Wait, you can’t just ride hard and expect everyone to drop off your wheel or crash? Who woulda’ thunk? This isn’t a triathlon, Adelaide. 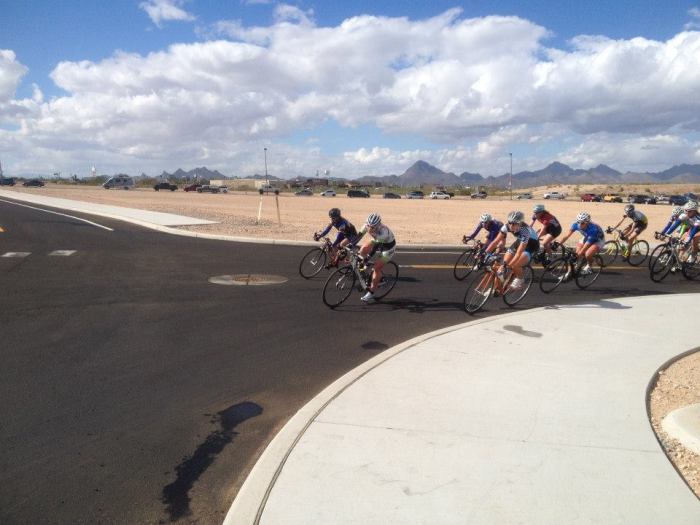 Adelaide sitting on the front.

After the race, I told her that she spent way too much time in the wind, pulling without attacking, to expect a good result, though she still ended up 9th so it wasn’t like it was a complete flop.

Then, in the afternoon, disregarding my own advice, I did almost the exact same thing. My first mistake was lining up at the back, thinking that I’d ease into it for the first 10 minutes then start attacking…probably lap the field once or twice, solo. Nothing too he-manish, just enough to get in a good workout and let everyone know a new sheriff had come to town. Instead, the race broke apart on lap two because of a medium-strength crosswind. I spent half an hour working through small groups to get to the front. By then it was no longer the front, since a three-man breakaway was half a lap up with all three teams represented.

Still intent on getting that workout in, I ‘pulled an Adelaide’ and just sat on the front of whatever group I was with at the time and got 7th, just after being lapped by the winning break. Good way to start the season, new sheriff! 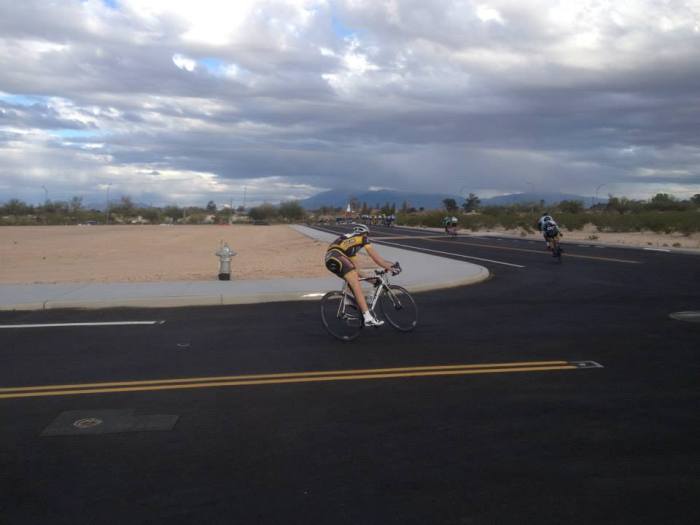 Picking my way through the pieces. 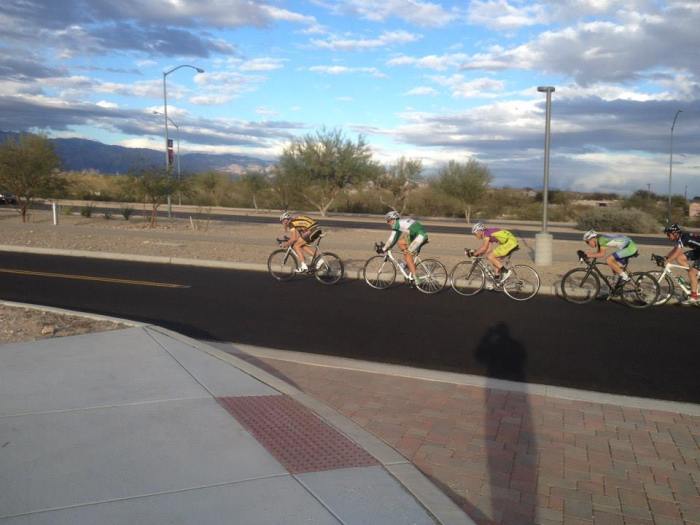 Sitting on the front. 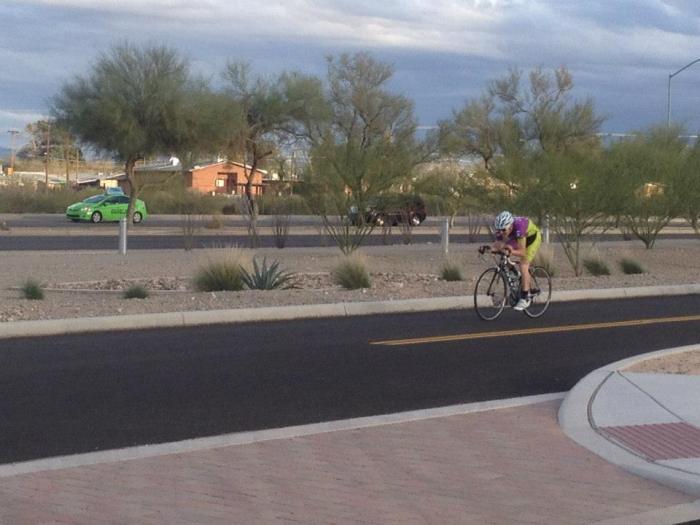 Quinn attacking and dropping me.

7th was out of the money of course, meaning that it was up to Quinn and his $4.50 to buy the post ride Costco pizza/frozen yogurt/chicken bake/and king-size chorro (sp?). If you weren’t aware, you can get diabetes on the cheap at Costco.

Day two was much better. Not in terms of results but because it was a road race on a hard course with some good competition and I was ready to crush it! Ha.

The course was downhill for seven miles, rolling and flat for six, and uphill/rolling/and false flat uphill for the last seven miles. We were to do four laps for a total of 80 miles.

I got dropped hard. At the end of lap three, my legs, lungs, and heart could take no more. They’d had it. I’d been at my limit for roughly the entire race at that point and one little kicker before the end of that third lap shed me out the back of the peloton. The “peloton” being eight guys at that point, but still, it was humbling. I’ve got some work to do in order to get fast again. Judging from my current base, though, I don’t feel like it will take long, which is the good news.

The strong men of the race included a super ridiculously revamped Smart Stop squad, Landis Trek, and Conor Mullervy of Champ Systems, who was the culprit for dropping me that third lap. Bastard. Smart Stop went one-two with Josh Berry soloing for two full laps and Cameron Cogburn attacking with five miles to go, leaving Conor to sprint for third. I rolled in a long time later for 10th. 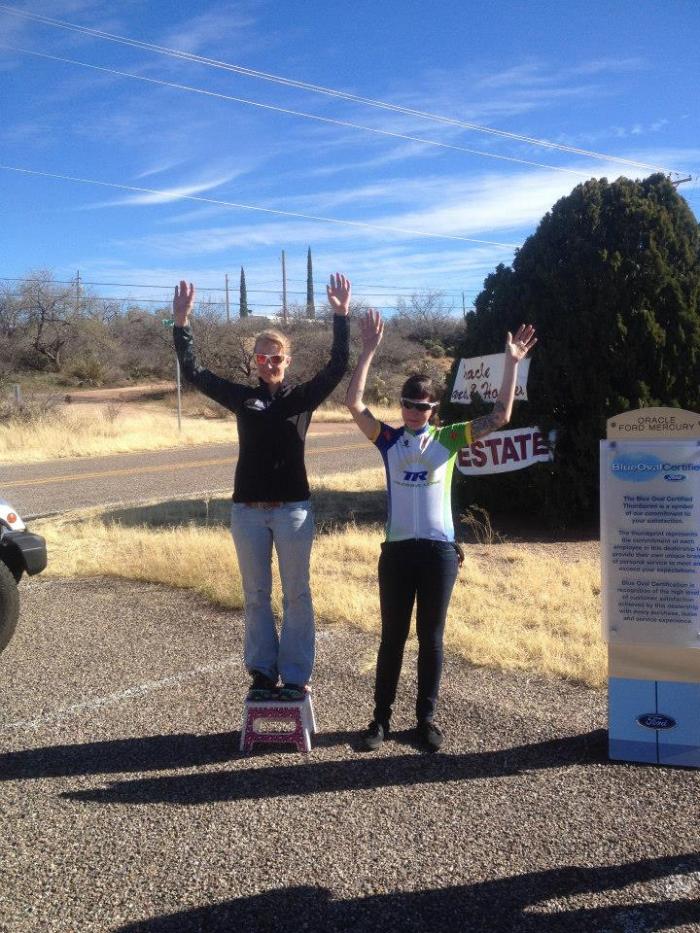 3rd place was too ashamed to show her face.

After our races, we jump started Quinn’s van for the ride home and took a quick stop off at my favorite grocery store of all time, Sprouts. Back at Quinn and Allie’s house, we cooked up some delicious backyard barbeque and downed three bottles of cheap wine by the fire pit. It was a grand old time and probably my favorite moment of the weekend.

My almost equally favorite moment was the six-hour ride the following day on Mt. Lemmon: 11,500 feet of climbing,108 miles, 5,600 kilojoules. I was feeling the previous two days of racing, but not too much since my power was decent and my energy levels were pretty solid.

Adelaide and I rode to the base and did the bottom 20 minutes together so I could help pace her 20-minute test. She set yet another record but kept the vomit down this time. From there I went on alone to milepost nine 4 times, then once to milepost four. The weather was great. 65 degrees at the base and 50 up above for most of the day. There were almost no cars, making for a quiet, dry, pleasantly lonely day of tempo riding. I had my new playlist “Thomas’ Winter Mix 2014” so I was entertained for hours.

Heading home, I’d gone through all 1,300 calories of my food at 5.5 hours and realized a very hard bonk was quickly approaching. Fortunately Tucson has plenty of fast obesity establishments to choose from once you get off Catalina highway, each conveniently located twice every 10 feet in every direction. I chose the McDonalds on Tanque Verde.

Within 4 minutes I’d gone from pushing 300 watts with ease to a rapidly deteriorating state that included but was not limited to massive loss of brain power, blurred vision, profuse sweating despite being slightly chilled, and of course complete lack of sound decision-making capabilities (see choice of food establishment). It still wasn’t a full on bonk. But just 10 more minutes would have been a disaster.

I stumbled through the doors and slid across the just-mopped and still slippery floors, regained my balance, and the smell hit my nostrils. I decided right then and there that I’d buy EVERYTHING. ‘Dear gods of grease, I thank thee for providing this bounty of happiness. I shall take every hormone-laden meat patty, every fat-drenched Freedom fry, and all of the chocolate dipped cones and, as quickly as possible, I shall stuff them into every open orifice I see fit and be happy and everything will once again be good and right in the world.’ But I only had two bucks.

In America, $2 still buys unlimited calories. Within 87 seconds of being handed my soda cup, I’d chugged 190 tablespoons-worth of sugar in the form of strawberry Fanta and was cured immediately. I cruised the rest of the way home slightly faster than the speed of traffic and could have kept going for another two hours at the same pace, no problem. My endurance, ladies and gentlemen, is not the issue.

Tuesday morning in Tucson means the Tuesday morning ride, similar to the Shootout but smaller, shorter, and without as much firepower. It’s still fast though, and great training for a tempo-legged northerner like myself. Adelaide, Quinn, and I woke up way too early and were out the door at a dark and chilly 7:10 AM. We met the group on campus and picked up riders along the route as we slowly made our way through town to the backside of Gate’s Pass.

With approximately 60-70ish riders, it wasn’t a big turnout. Quinn said they’ve been getting over 200 on the Shootout lately and over 100 on the Tuesday morning ride. I think Tucson is once again become THE place in the States for training camps and general winter riding.

I’ll cut to the chase though. I won. Yep I won the Tuesday ride, taking a commanding yet uncomfortable lead on the final steep pitches of the climb up Gate’s Pass for the big W. Mission accomplished, folks. Season complete. Time to pack it up and start planning for 2015. Resume has been updated; please contact my agent and send me the papers to sign once the contract is hashed out. I won’t entertain the idea of anything less than 700K (euros). 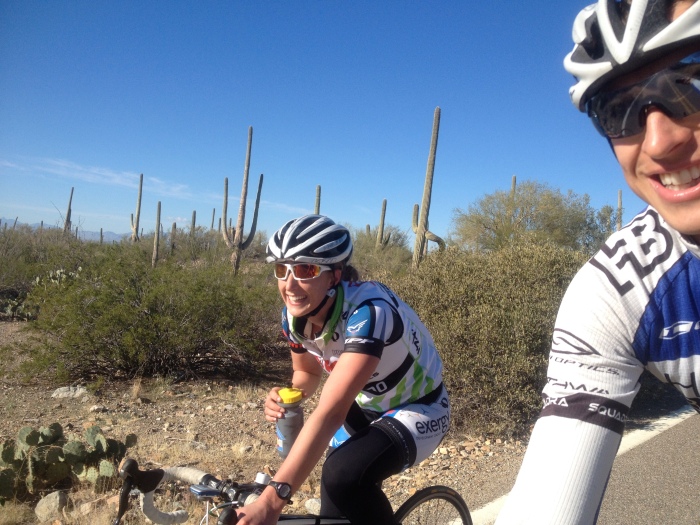 Putting in some extra miles after the Tuesday morning ride.

Tuesday afternoon, as I write this from the airplane, was unfortunately our last day in the beautifully sunny and warm Southwest. We’re headed for the snow and four-degree temps of Colorado, about 18,000 minutes too soon if you ask me. I certainly wouldn’t complain if we were forced to stay in Tucson for another five or six weeks, training by day, racing by weekend, and sitting by the fire pit in the Keogh’s backyard by night, watching their wild dog, Lola, run rampant circles around us all like only a true desert beast can.