The word equality is more striking than “equal pay,” and cuts directly to what we’re really talking about. In pro, as well as amateur cycling, there’s a sort of debate about whether women deserve equal treatment. This is in regards to prize money, salaries, equal number of races,  quality of races, etc. The fact that this ‘debate’ exists has become increasingly disturbing to me. It makes me feel a bit shameful, knowing that so many of my friends and colleagues are, deep down, jaded by bigotry.

But I get their point. I see their side of the story very easily, and when I first started cycling I thought–(okay not when I first started. Back then I didn’t think about anything, I just pedaled hard)–so a few years after I’d been in the sport I pondered the question of whether women’s cycling had reached a point where it was on par with men’s for equal pay, equal number of races, the prestige of starting last in an evening crit when the crowds are at their biggest and rowdiest. I decided no, it didn’t. And women’s cycling still isn’t there.

In order to change this, we have to be progressive, not passive. We can’t wait for it to catch up. Farmers don’t expect their crops to grow without fertilizer and water. Maybe that’s a bad metaphor since I’m comparing women to corn, but my point is still there. And besides, everyone likes corn. Women’s cycling, just like men’s, needs nurturing to see growth. At this point, because their field is being overrun by a rampant strain of soybeans from across the road (men’s cycling), this particular crop of corn needs some extra care and attention.

It’s no secret that there are way fewer women that show up at a local race than men. Their races may not be as competitive because of the lack of participants, but do the women want it any less than the men? Don’t they try just as hard? Don’t they train as ferociously and as passionately? They sweat and grit their teeth just as much as any guy and they look better doing it too. So why the hell are we keeping them down!?

Cycling, like most sports, should be a flagship for what society could be like. Sport exemplifies the pinnacle of human endeavor, an arena that allows fierce competition without the downfall of war and consumerism: death, poverty, and destruction of the natural world. Sport should stand as the antithesis to greed and dishonesty within competition and the way our society is actually run, where profits steam-roll the quality of human life…and human life in general if you’re from the third world. Sport should separate itself from the real world and demonstrate what we can accomplish with hard work and ethics.

For this reason, I view dopers as unworthy participants in sport. They were given the opportunity to be part of something great, and instead they squandered that chance with greed. It’s even worse to hear about dopers now in this day and age when PEDs are not at all necessary to take in order to win. I increasingly view male cyclists, those who don’t want the attention and funding of sponsors to be divided evenly amongst the sexes, in a similar light.

White men have dominated the earth for long enough. It’s time to let our stranglehold on everyone else cease.

One thing that I truly admire about America is the equality between men and women in the workplace, at least compared to a lot of other countries. I expect that women have capitalism to thank for this, as corporations, long ago, realized that they could double their profits by making women work. But even here, the land of free enterprise–or as close to it as you can get–the average American full-time working woman still makes 33% less than the average full time working man. Men, would you be willing to do the same amount of work as you do now with a pay cut of $11,600 per year?–and have that money go to another group of people (women) that are doing the same amount of work as you? What. The. Hell. Where’s the outrage!

The gender wage gap is caused by discrimination. And while it’s huge, it doesn’t even bring to light an even larger wage gap–that of the average US man vs woman (working and non-working included). Women account for the larger percentage of stay at home parents, who don’t count as workers because raising children is not real work.

“Well, some women want to stay at home and raise their kids. There’s nothing wrong with that.” I agree, there’s nothing wrong with that. In fact, more time spent with family should be encouraged for women and men. A 40-hour a week job is too much time spent at the office. We’d all be happier working less and having less things. But shouldn’t stay at home moms be compensated equally for their work? Raising kids is work, right? Or when working moms have a baby shouldn’t they at least get some help? Here in the States, we don’t even have child care or paid maternity leave. The few countries in the world that don’t have any sort of state-guaranteed, paid maternity leave: Papua New Guinea, Swaziland, Liberia, Lesotho, and the US of A.

Below is a map of the world’s maternity leave. This map is from 2009, and Australia added paid maternity leave in 2011, so it’s no longer in the pink category with us–the only category that offers nothing. 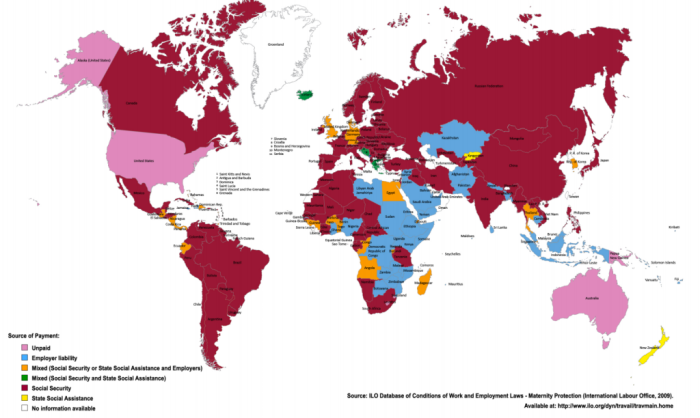 Unfortunately, money is power. When one gender has less money than another, they will never have the same rights. I don’t know, maybe most women don’t care about this but it piss me off even as a man.

Back on the topic, women’s cycling deserves the opportunity to grow, and as members of this sport, we should all strive to show the ‘real’ world what humanity can and should be like: equal regardless of race, gender, or nationality.

A little affirmative action is needed for women’s cycling to catch up, so even if the numbers aren’t there yet, women’s cycling deserves more money and more races, which will bring more women into the sport to fill those races and eventually legitimatize the higher salaries and prize money (most pro women don’t even have a salary these days). This will of course take time, and money in this sport is very sparse, so everything helps. My team has a women’s program, and although it’s a little smaller than the men’s side, it’s a huge step for a first year continental program to have a pro women’s team. Adelaide’s race, the Gebhardt Automotive Cycling Classic, had equal pay for the top three men and women in the pro/1/2 fields. The money went two places deeper to 4th and 5th in the men’s race because the field was so much larger (58 starters compared to 13). Things like this matter and other race promoters should take note of this set up. Most important is a change of mindset. When you’re talking about equal prize money and equality for women with your friends, show some compassion for your fellow human beings and realize that what you say behind closed doors matters. Even small stones make a ripple.