I left off with the 2009/2010 trip spent in Tucson with Chris Daifuku, among other characters. We spent the hard days doing the Shootout and riding up Mt. Lemmon, and the rest days way out in the desert shooting rabbits, quail, and other things that moved for meat and entertainment. Some of these other things that ‘moved’ may or may not have included saguaro cacti, old signs, and Chris’ shoe laces—the later being the incident that lead to our never touching the shotgun again.

2009. I was very luckily awarded a spot on Hagens Berman for the 2010 season. I’m still not quite sure how this happened since I really had no results to speak of. I must have had a friend (Russell Cree comes to mind) convince the management of HB that I would be fast. That November, teammate Chris Daifuku and I went down to Tucson for four months of training in the sun. I’m not sure what I did to make him hate me, but he quit the team that winter before we started racing and hasn’t talked to me since March of 2010. I must have left the sink full of dirty dishes one too many times…or he’s been trying to forget about the winter he lived with a real life pedophile (I’m not talking about myself by the way).

2010. Nature Valley. One of the best pieces of advice I’ve gotten from Joe: “When the caravan begins to form an echelon, that’s when you know you’ve got to be careful of the crosswinds.”

2010. Lang and Spencer and I went down to Park City to get ready for the tour of Utah.

2011. Belgium. This was one of the first kermesses over there that year. I attacked about 21 times and finished probably around 21st place too.

2011. Sign-on in a typical Belgian cafe/race HQ with Justin of England and Evgeyne of Russia.

2011. This was a super nasty day. We rode something like 40K out to the race, where it poured almost the entire time once the start gun went off. I finished like 17th or something like that and returned to where I’d stowed my bag full of warm clothes and food. It was gone, as were my housemates/teammates who’d DNFed hours before. When the left they had stored my bag in the cafe, but there was no way I’d find this out until I got home. I rode back in the pouring rain, finishing off a 220KM day in the dark, drenched in cold rain, nearing a fantastic bonk. I also got really lost on the way back. Fuck you Justin. You too Jake. 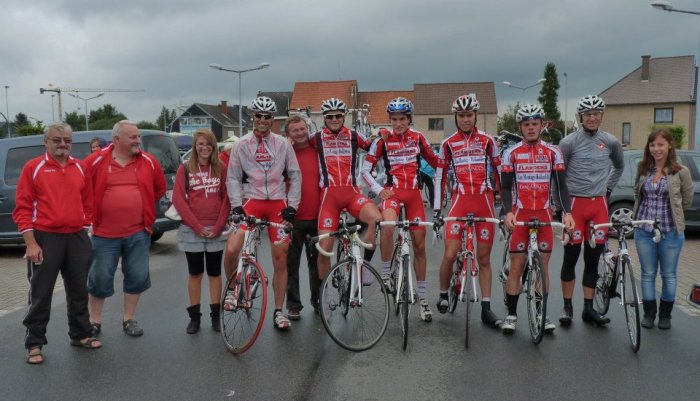 2012. Last year I was sick most of the time in Belgium. Here I am with the team before a rainy interclub race. I lasted one 15KM lap and quit.

2012. Stage 1 of one of the hardest races I’ve ever done: Tour of Namur in the Wallone region of Belgium. 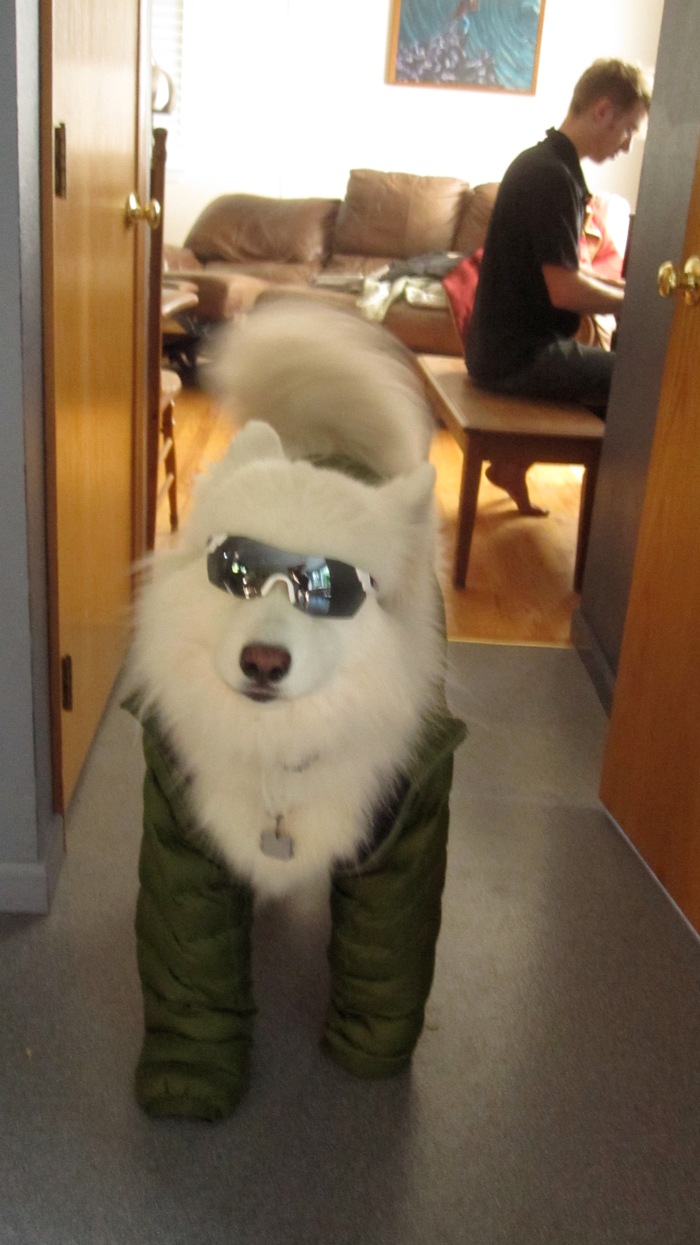 2011. Thomas and Galen at home in Sherwood, Oregon, after my season ended in October. 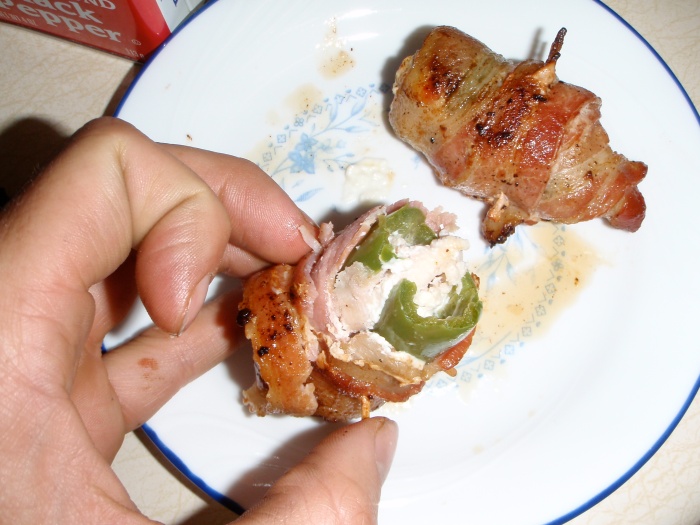 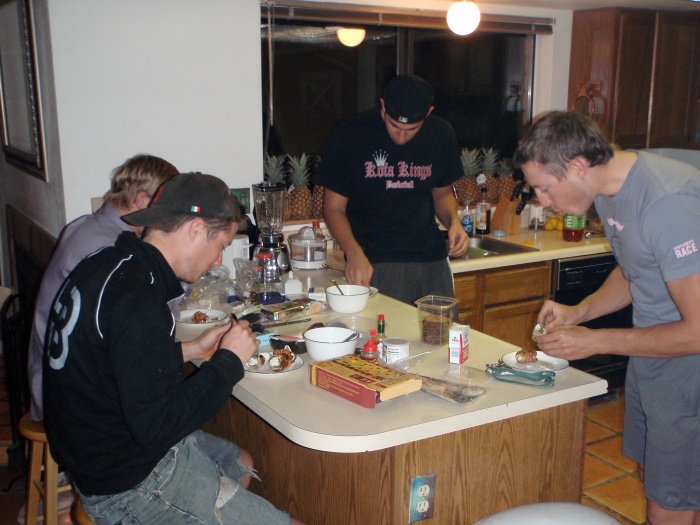 2009 in Tucson. The neighbor kids came over and showed Chris and I how to make them. 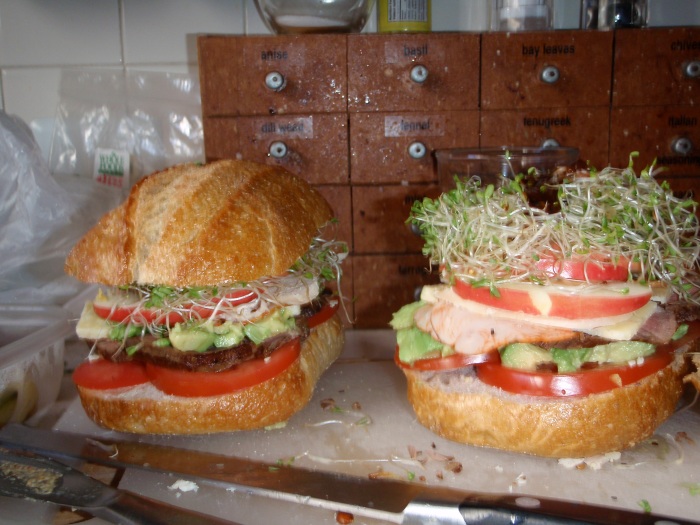 2012 in Boulder. Becoming a sandwich master is a key to becoming a fast bike racer.

2011. First big snowstorm of the winter in Boulder. I made quite a bit of cash shoveling driveways that winter. 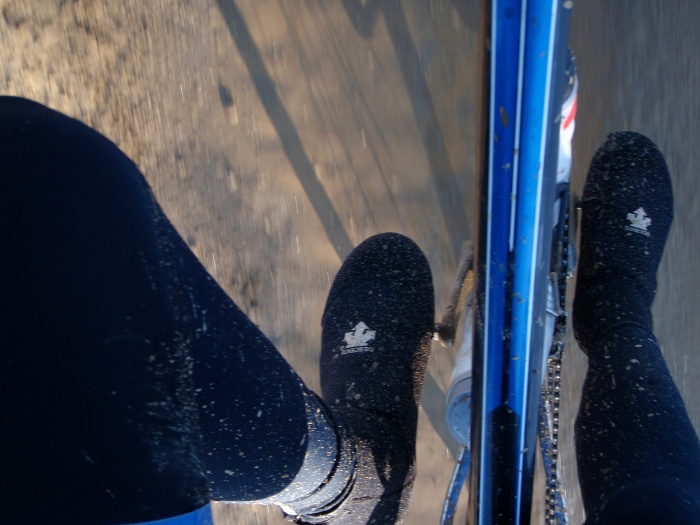 2012. One of the many dirt/mud roads in Boulder that winter. Ever wonder why my bike was so dirty at team camp, Joe and Alen?

2011. I worked at the Boulderado Hotel doing banquets and passing hors d’oeuvre until my firing on Christmas Day. I got fired because I worked too hard. Not because I took too much food home:

I’d always come away with a good $400 in food every night I worked at the Boulderado. It was either that or it ended up in the trash. Americans obviously don’t give a shit about waste.

2011. My room in Georgia at elite nationals. Most host house families still have shrines built for their long-gone kids off in college. 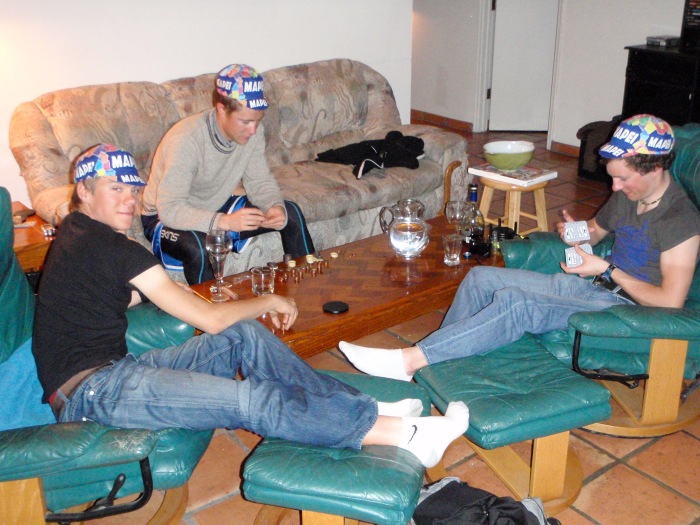 2010 in Tucson. Spencer, Daifuku, and “Swiss” Chris from Switzerland. We met him on the Shootout ride and befriended him for group rides that winter. Michael was there too that night I believe. 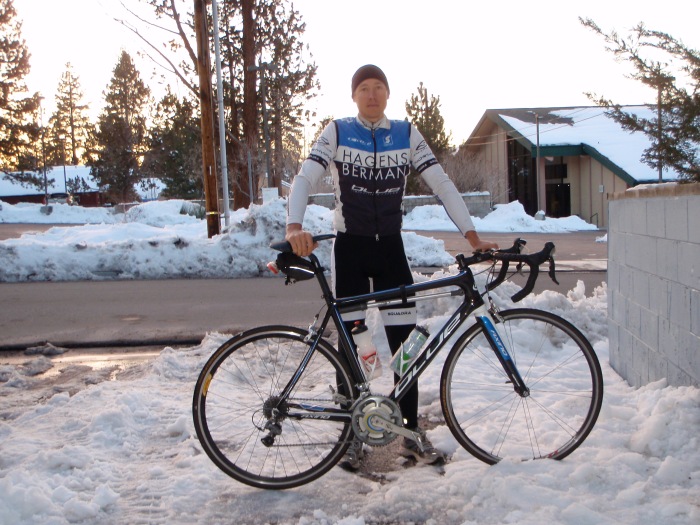 2011. Five weeks of winter in Big Bear. Spencer, his girlfriend at the time (Karol-Anne), myself, then later Dan Bechtold, tried the live high train low plan in February. It did not work. 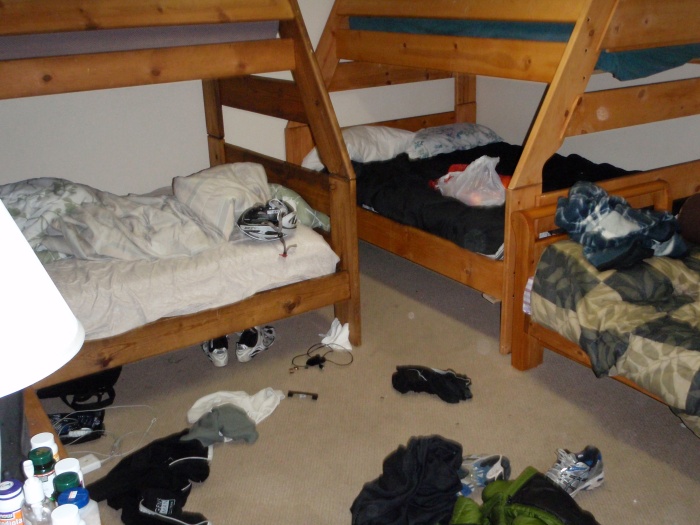 2011. I did more than a few 6-7 hour rides from top to bottom. My biggest day included 3 x 15″ intervals down in Redlands followed by the climb back to the top. Total elevation gain that day was 14,500 feet.

2011. Needless to say, I ended in the dark more than once. I actually spent quite a few lonely hours riding up the mountain in the pitch black.

2011. Spencer and Karol-Anne on the soup dinner diet at Big Bear.

2011. Spencer loading his car the morning after a big snowstorm in Big Bear. We’d stop at nothing to get down the mountain for our training in the 70-degree sun every day. 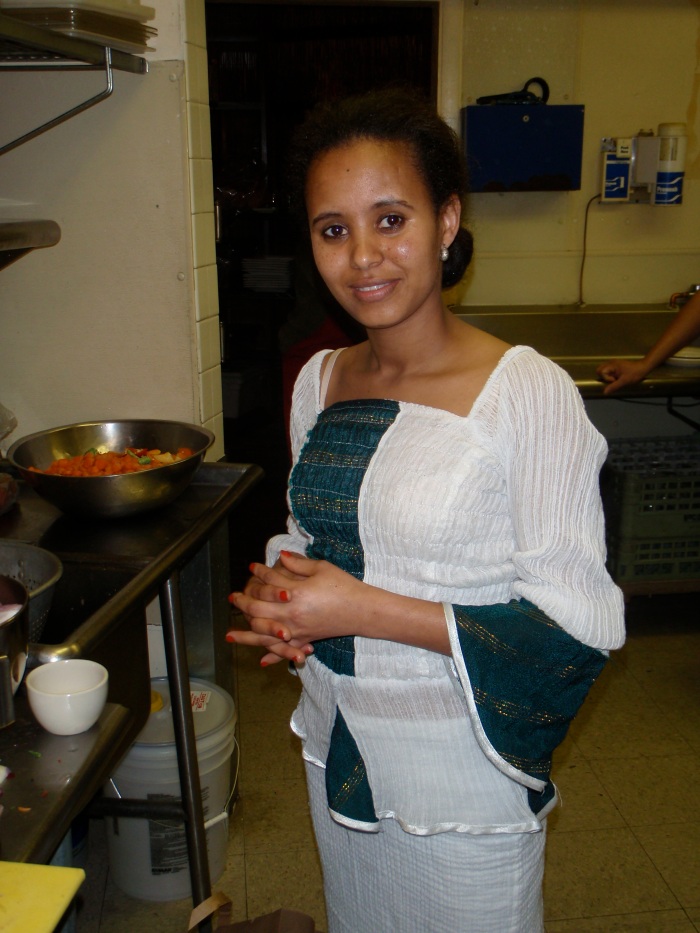 2012. I worked at Ras Kassa’s Ethiopian restaurant in Boulder with Abesha for half a year last year. Amazing food and atmosphere to be a part of.

2012. Ian Crane and Colin Gibson during team camp in Agora Hills, CA. No better way to prepare for two back-to-back stage races than a week of long team camp rides…  (I put those dots in as sarcasm, BTW). 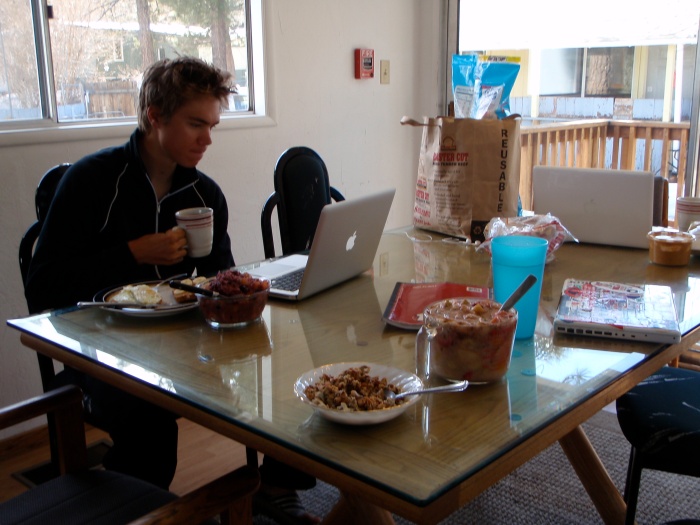 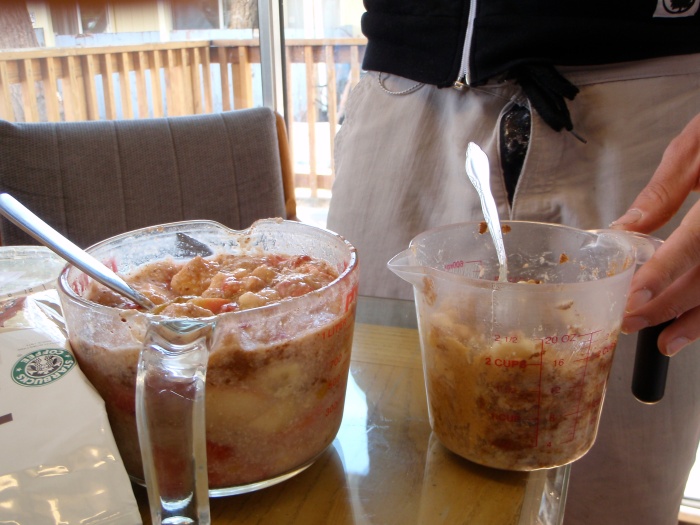 2011. Having a Korean BBQ dinner with some of the other people in the hostel. Looks like Dan just finished a 6-hour ride.

2009. My second Kona (Zing Supreme) sitting in Dave and Maire’s condo in Eugene.

2011. Danny after finishing the U23 national crit. 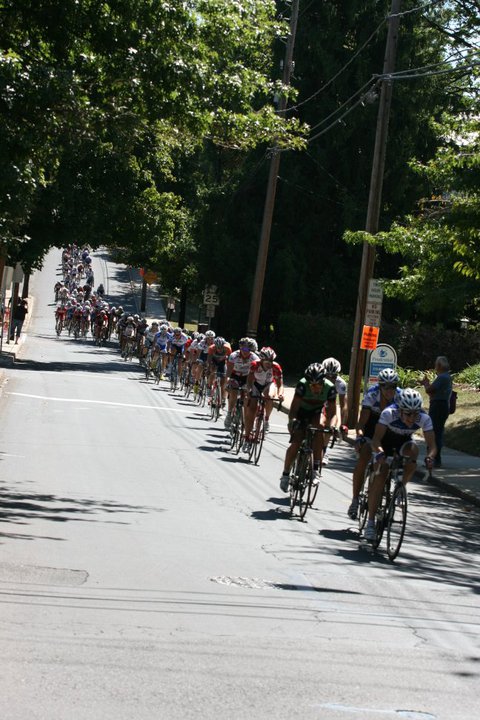 2010. Lang leading me out before the climb at Univest. I attacked but didn’t really go anywhere for long.

2009.  Riding for Life Cycle at the time, here I am getting beaten by Jacob Rathe in the Cherry Pie road race.

2011. The Zingem house in Belgium. Don’t be fooled, it’s not a house it’s an upstairs apartment next to a highway filled to the brim with crazy people like myself.

After a big day of racing and riding, Geoff Hawksworth, Evgenye, Justin and Michael (the Greek) spoil ourselves with some over-priced pizza from downstairs.

2012. Belgium. Jake Tanner in his Geofco kit pretending to know how to read.

2011. Best internet spot in the Zingem house was stealing it from the McDonalds across the street.

2011. Best ride/race food were these waffles. 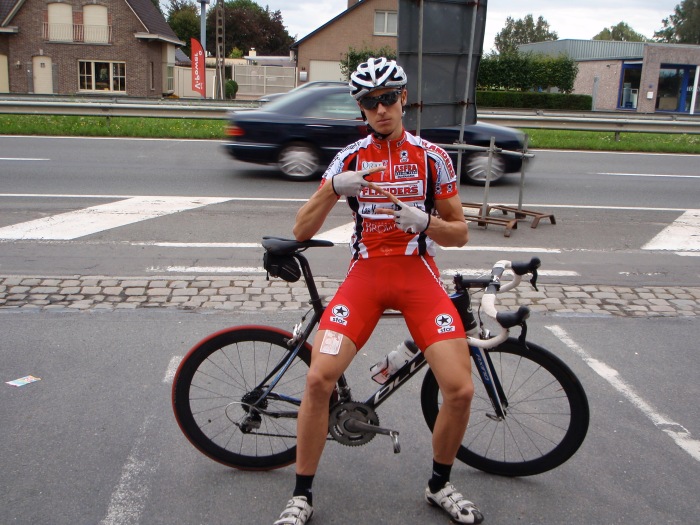 2011. Justin, Jake, and I heading out racing for ASFRA Flanders.

2011. Many days were filled with “shopping” at Colruit. By shopping I mean eating 20 euros-worth of free samples.

2011. We also saved a lot of local produce from the many farms surrounding the area. Our biggest purse included this humongous tubor of sorts. I take pride in NOT being a member of the mission to steal the pumpkin from the pumpkin patch that went horribly wrong, ending in a chase by the farmer himself. 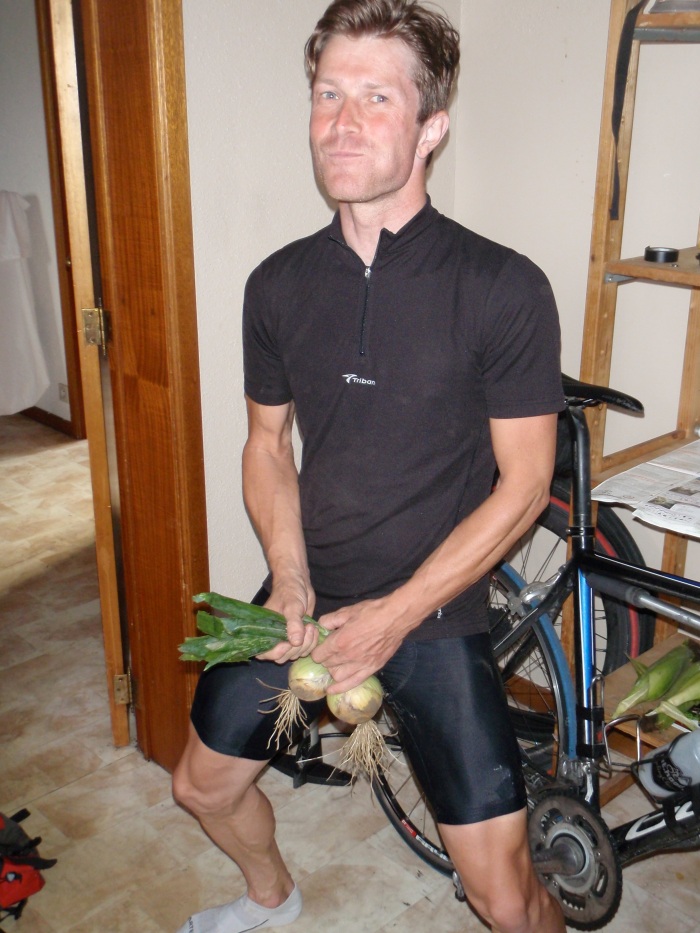 2011. Justin. We also got lots of regular potatoes and onions.

Michael, the schizophrenic Greek who came to Belgium to become a pro cyclist, even though he never had nor ever will start a bike race.

2011. The Flanders team car. I got three speeding tickets in this on our ways to various races, despite it being a 15-year old diesel unable to go above 5o miles an hour. Check back for Part 3 next week.

One thought on “Eight Years Part 2”