The last four days have been jam-packed with work at the Boulderado, a four-star hotel where I’m a member of the large wait-staff. We do banquets for parties, serve appetizers for silent auctions and fundraiser-type things, put on “teas” for old ladies, buffets, and holiday dinners. It’s way higher class than any dinner party I’ve ever attended and usually plates or invitations go for $30 or more. I mean, there are TWO forks and TWO spoons per person!!  Come on!

I always get a little nervous when I post something negative or funny about my workplace or a person I’ve recently encountered, so if the management or any of the other employees happen to google my name and come across this blog post, please stop reading right now.

Okay, now that it’s just us I can make fun of those stupid fools all I want. Haha, just kidding. I really only have nice things to say about working at the Boulderado, unlike the movie theater (which actually isn’t even as bad as I once thought). Although a lot of the staff at the Boulderado get their panties in a bunch for what I consider to be small issues, the work environment there is pretty fun and very fast-paced. I have to remember that when you’ve done three hours of hard climbing in the morning, the subsequent endorphin-release that takes place puts you into a blissful state of mind where you don’t really give a damn about anything else for the rest of the day. So if the forks are slightly askew and require re-adjustment (since I suck at setting the tables) I don’t really care when I get scolded for it. It amazes me how easily the other employees seem to get their feelings hurt or become angry when there’s any sort of conflict or petty confrontation with one another. I can understand that the cause of some of the stress is due to the rush and panic to set 150 tables and get all the food ready and served with only six or so staff members, but like I said a lot of the tiny arguments seem to get blown out of proportion. A hard ride certainly takes you down a notch. If everyone on earth was in a constant state of endorphin-flooding or just plain physically tired all the time like a cyclist, the world would have many fewer problems.

The sorority/fraternity part on Friday has been my favorite shift at the Boulderado so far. It had everything a person could want: a chocolate fondu fountain, alcohol, cheese and crackers, and lots of drunk sorority girls…all covered in chocolate from the fountain. The banquet had a two drink maximum for each 21-year-old or older. Last week when the hotel hosted one of these sorority parties and hadn’t had a drink limit, people had been puking all over the place. So this time the hotel was prepared. After being ID’d and receiving a wrist band, the Greeks had to come to me to get their two drink tickets and a sharpie marking on their wrist band to show they’d gotten their tickets (so they couldn’t come back to get more tickets).  And keep in mind that the tickets weren’t free drinks, they still had to buy their drinks.

None of the sorority girls or frat douches knew about the drink limit until they came to me, and they were pretty upset about it when I told them. Almost every person tried to get me to give them extra tickets. Some jokingly and some very serious. For one hour straight I had a giant circle of people around me all pleading and arguing with me to give them extra tickets. “Ahh, come on man, no one will find out.  Just one extra ticket, man.”  “Could you just, like, please give me two more tickets?  Like, no one will know.  Pleeeeeease???” I felt a little bad for them, but at the same time I hate frat guys and the more that people try to peer-pressure me the more I cherish being disagreeable. The girls tried flirting by making pouty faces and stroking my arm while the guys just outright tried to bribe me with money. I couldn’t believe they were willing to dish out $20 just for the opportunity to buy a couple more over-priced drinks. These people were loaded!

Anyways, as the night wore on my new job became to keep the chocolate fountain area clean. There was chocolate everywhere, and since the hotel doesn’t keep garbage cans out in sight of the guests, because that would be low-class, the ground and the table that the chocolate fountain sat upon became the places of choice for everyone to discard their dirty napkins, chocolate-covered fruit, and the millions of shish-kabob sticks used for dunking the fruit in the chocolate. I was kept busy.  At the end of the night my white sleeves looked like they’d been subjected to a full day cleaning outhouses.

The music was loud, the dance floor was packed, the air was hot and muggy, the lights were dimmed, even on the two drink limit the guests still somehow managed to become drunk and disorderly, likely from all the booze they snuck in, and the shenanigans picked up as the night went on. A wine bottle was stolen. A corkscrew disappeared. A frat guy shoved one of the older hotel employees. Some girls got into a fight. Chocolate fruit was thrown.  I soaked it all in, wishing I could ditch my stance at the chocolate fountain and go join in the fun (or at least eat some of the chocolate). Later that night when all the guests left, all my coworkers appeared to be shell-shocked. They complained about the rowdiness and rudeness of the “kids” for the next two days. I thought it was fun, and personally would have been much worse-behaved had I been in their shoes.

My first night at the hotel was the Thursday before the sorority party. It was a big dinner party for a group of Boulderites who give micro loans to poor women in Peru (or Africa, according to one of my co-workers whose geography aint so good). On the hors d’oeuvres menu: fried coconut shrimp, chicken casadillas, fetta and spinach-stuffed crisps, those small pieces of toast with fetta, tomato, and basil, and one other thing that I can’t remember right now. They all tasted good. The average age of the attendants was in the 40’s and 50’s, and judging by many of the guests’ attire, which seemed to come from REI, I felt that they were all new money, not the socialite-types more comfortable in mink coats and tuxedos. It was a pretty easy party to manage and I had fun, though it was somewhat boring.

Late Saturday morning was a tea party.  Not breakfast or a brunch, but tea.  Each person got their own tea pot, while the food included scones, fancy little finger sandwiches, and little chocolate deserts. Each table had between five and 10 old ladies, usually some sort of a book club or charity group. The room was packed, as usual, with 140 people, but the ambiance was quiet and relaxed. Two violins and a cello played Christmas tunes while the old ladies sipped on tea and nibbled on the finger sandwiches. I grew extremely hungry and my fake smile turned into a real frown as the afternoon passed by without a lunch. I kept hoping that one of my tables would leave some sandwiches on the platter for me to take back to the kitchen, where I could eat them, but the women kept asking for the leftovers to be boxed up. I started bonking from boredom and hunger about four hours in. I was finally saved by a platter of sandwiches that, at last, made it back into the kitchen, followed by a platter of miniature deserts.  Suddenly all was right with the world once again and I began bussing tables like a mad man. But the tea party was boring. I felt especially bad for the dozen or so little girls whose mothers had drug them along, dressed them up in their best clothes, and forced them to sit upright and act lady-like.  I thought of all the other things a kid should be doing on a Saturday.

The best part about this job: taking home the leftovers. My grocery bill has plummeted.  This is only a mere a sampling of what I’ve scavenged: 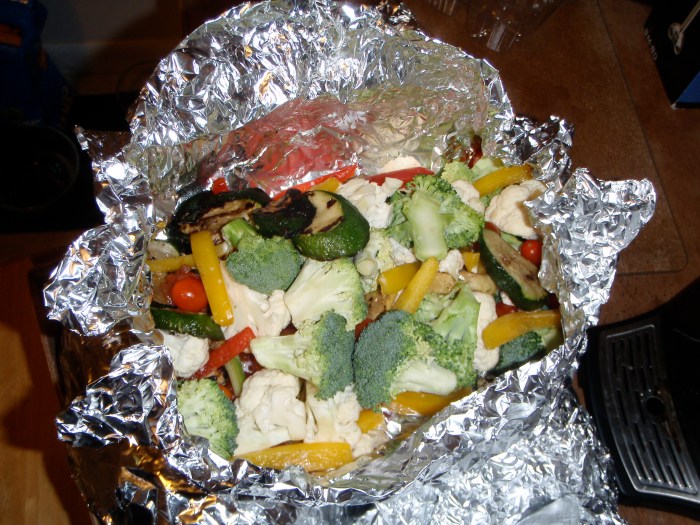 About four pounds of bbq chicken.

Two pounds of fancy cheeses.  This is the last time I take home cheese by the way.  Cheese is not optimal cycling food.  I ended up giving most of it to an old man whose driveway and sidewalk I shoveled today. 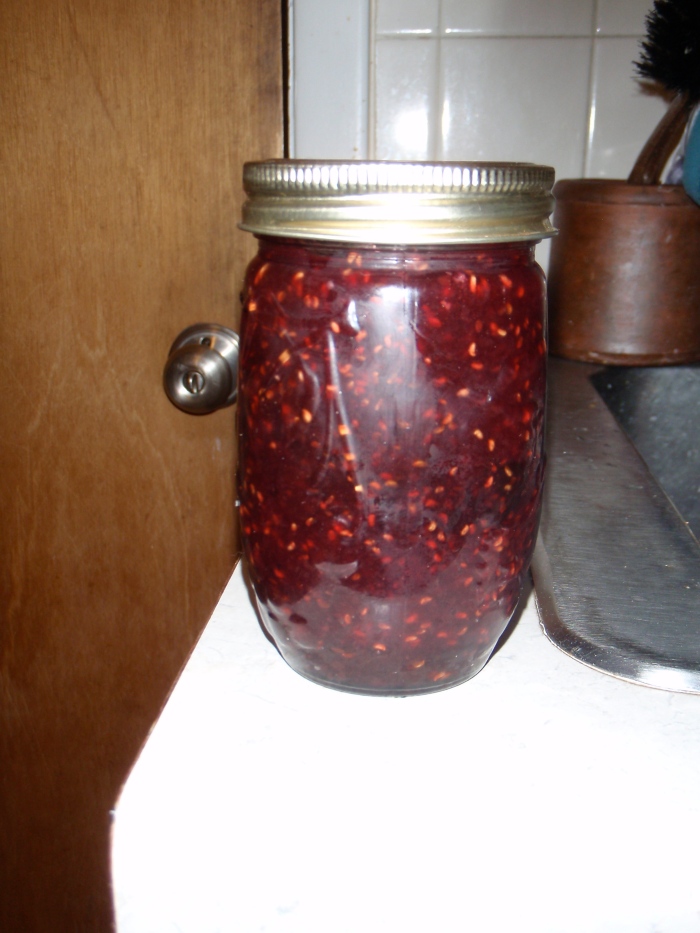 I collected about 30 miniature half-eaten jam jars from the tea party and combined them into one jar when I got home and voila, a full, free jar of raspberry jam. 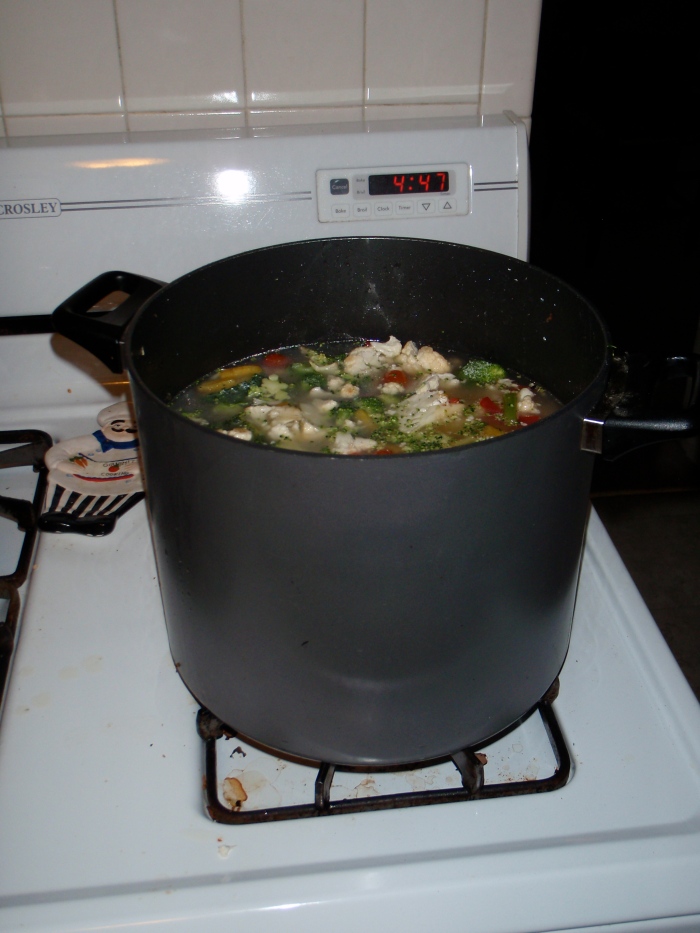 I took home a turkey carcass one day and made a huge pot of turkey soup with all the vegetables I had.

Three or four hours of riding in the morning and then on my feet serving hors d’oeuvres until midnight.  Barely awake.