It snowed eight inches last night.  I woke up to a phone call from a Craigslist person, responding to an ad I posted the night before letting people know all about my extensive experience in the snow-shoveling business.  Everyone has been talking about the coming storm for the past couple days, super excited that it was supposed to snow on Wednesday night and that our 60-degree days were coming to an end.  They’ve been talking about it so much that in my dreams the past couple nights, it snowed.

The woman calling about my Craigslist ad said she’d pay me $20 to shovel her driveway and sidewalk.  Not quite awake yet, I asked her if it had actually snowed, and said that I thought I only dreamed that it did.  She seemed confused.  I came to my sense, realized it must have snowed, and told her I’d do it.  She gave me her address.

I hung up, walked out into the living room and looked outside.  Holy shit.  There was way more snow than I thought.  I got online and typed in her address to see how far away she lived.  Five miles.  It was still blizzarding outside with snow coming down hard.  I made my oats, drank a lot of expensive Whole Foods tea that I paid a lot of money for because it’s loose leaf and therefore much better, read the internet, and waited for it to stop snowing so hard so I could get on my trusty $15 Craigslist mountain bike that’s way too small for me, and ride to South Boulder and shovel her driveway.

It wouldn’t stop snowing so I decided to just get in on anyways at around 10:30.  I had things to do today and couldn’t wait around for the snow to stop.  Plans: 1) use my status at the theater to see a free movie with Phillip, 2) buy more tea at Whole Foods.  I rounded up some warm clothes, strapped the snow shovel to my backpack, and took off for what I knew would be an adventurous day.  I got a lot of stares from people in their warm cumfy cars as I rode down the street in the snow storm with a shovel on my back.  I couldn’t see people staring at me, but I could feel the piercing gaze of their eyes, just like when all the ladies check out my sugarlumps.

My pants, shoes, and everything got soaked with melted road snow, then quickly froze and created a protective ice shell that blocked the cold wind…Nature’s wind breaker.  I got to within half a mile of the woman’s house by the time I’d used up all but my smallest rear cog–the rest had been frozen into a gigantic block of ice.  I spun like a mad man for a few minutes and arrived at what I hoped was the correct house.  The woman wasn’t there, so I shoveled her driveway and hoped that I’d be paid some time in the future.  It only took 12 minutes, so I walked around and knocked on other people’s doors hoping they’d also be too lazy to shovel their own driveway.  Here in Boulder you have 24 hours after a snow storm to clear your sidewalk before you get fined by the city.  But since it was still snowing the clock wasn’t ticking yet.  And the more rational thinkers must have realized that their money would be best spent on my shoveling AFTER it stopped snowing.

I borrowed a couple pots of hot water from someone and un-dethawed my gears so I could ride home.  I’d cancelled my noon movie plans with Philip since it took a lot longer for me to ride out to the snow shoveling job than I’d anticipated.  On the way home, not two blocks from my house by the time my gears were frozen again and I was spinning a ridiculously small mountain bike gear, I spotted another freelance snow shoveler walking the streets.  This was MY turf!  A fight would surely ensue.

As I built up speed to joust the invader in the back of the neck with my snow shovel, I realized it was Philip.  He and his brother had stolen my idea and were out roaming the sidewalks trying to convince old ladies that they needed their driveways shoveled, when the part of the city they were in didn’t even have driveways.  I ditched the bike at home and joined forces with them.

We ended up driving to one of the rich neighborhoods, since rich people are lazy and don’t realize that $20 is a lot of money.  We spent the next couple hours realizing that most rich people are at work during the day, hence the reason they’re rich.  Either that or they were all out shoveling people’s driveways.  Anyways, a few people were home and a few of them (two) wanted their driveways shoveled.  We made $35.  Split three ways that was $9.50 each.  Philip and his brother gave me the bigger split of $10.  Not bad for walking around in the snow on a beautiful white first day of December.

I returned home hungry and ready for the next job: my first night working at the Boulderado Hotel banquet.  I had to wear a tie.  FML.  There were about 150 people in our party, so it was big but everyone was in a good jolly mood.  It was pretty sweet.  I basically just walked around serving horse dervies to cougars all night.  The wine was flowing freely and I’m pretty sure a few of them wanted to take me home.  Though if this happened I was a bit worried someone might break something, what with the whole deal of that osteoporosis thing and all.  Cyclists are known to have low bone density.

Speaking of weak bones, I crashed on my ride home from the Hotel tonight.  It was bound to happen since the roads were covered in ice.  Every good day comes to a crashing end, so I wasn’t too surprised.

The banquet job is far better than the theater since I get to eat and take home lots of really good food.  And I’m looking forward to working tomorrow night: we’re hosting a sorority party.  And with any luck it will snow again so I can go shovel that woman’s driveway for twenty bucks.  The living is easy here in Boulder.  That’s why I’ll have to subject myself to three hours of hard climbing in the morning if it doesn’t snow. 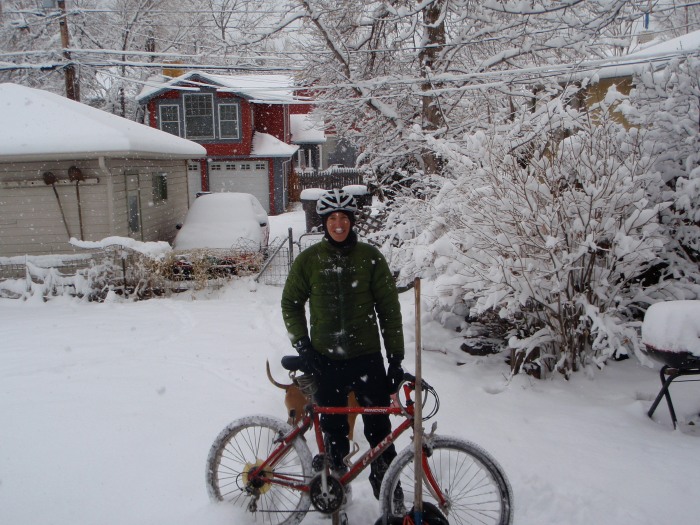 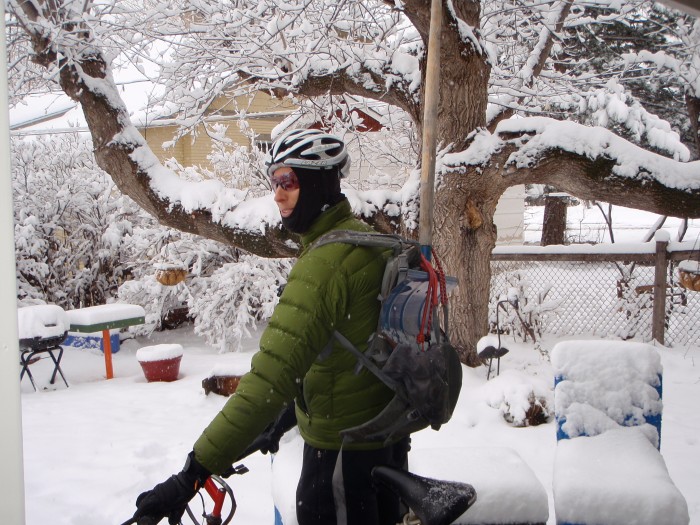 My housemate thought I was crazy, when in fact the real crazy thing is subjecting yourself to a day of 20 minute threshold intervals.

By the way, Ian, I’m totally beating you in the HB teammate blog post stage race this week.