there will be no capitols spelling fixes or question marks in my posts for a while because im writing only with my lefy hand.  shit.  gonna stick to my word and not go back and change that.  Ah, never mind.  I just figured out I can type perfectly well with my right hand.  Though now that the challenge of it is gone, I don’t feel like writing anymore.

The first half of the day, as you remember if you read my blog post from yesterday, was pretty chill and somewhat boring.  After our morning ride we laid around eating and writing blog posts.  By the way, that video took me roughly four hours to make.  But eventually the day finally turned to bike racing.  We headed out the door into the heat again at 8pm and rode over to the downtown Blue Dome crit course.  I was feeling pretty good on the ride over and the adrenaline was building as we entered the gated off streets surrounding the course.  There were thousands of spectators lining the figure 8 shaped crit, but after a half hour of warming up they all left when all of a sudden it got dark and a huge thunder and lighting storm rolled into town, dumping billions if not trillions of tons of rain on everyone.  The cat 1/2 race ended right before the storm reached its worst point and I went out on the poorly lit course to take a few laps and get the feel of it.  I ended up taking 30 psi out of my tires.  It poured extremely hard for 15 minutes.  Lighting strikes were going off every minute and thunder boomed and echoed among the nearby skyscrapers. 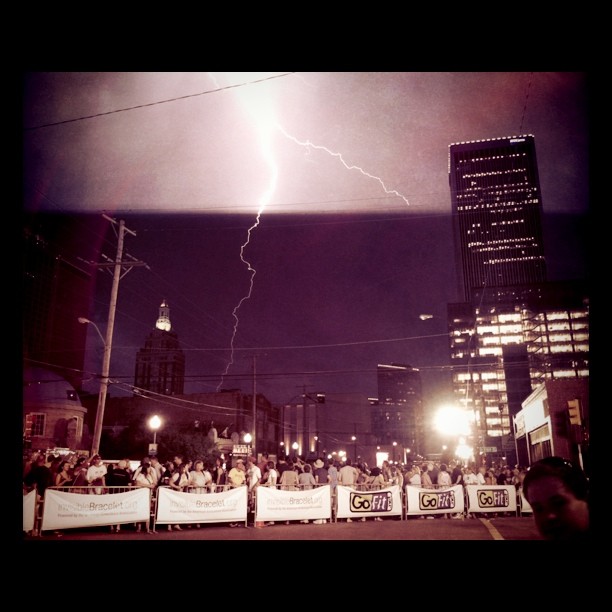 sorry for not giving props to the photographer, I don’t know who took this.

It was still warm out, which was good, and the rain eventually stopped and our race got underway at 9:30pm.  I had a great spot and lined up right at the front.

The gun went off, but we had already started when the announcer said, “ready..”

I fell back pretty quickly, not from the pace but from taking corners like a puss.  It was extremely slick and crashes were occurring on every lap, sometimes two crashes per lap.  I got “stuck” behind a crash and took a free lap, which helped move me back up a bit.  Everyone else was doing this too though and I eventually realized I was too far back again.  My legs were feeling phenomenal though.  I’m not sure if the entire race was just super slow or if I was feeling really good, but I pretty much nosed breathed all of it, slowly moving up until I got into the top 30, which I felt was pretty safe (relatively) and waited there for a good opportunity to get to the front and attack.  The time never came for me because with about 30 minutes left to race I went down hard into a pile of crashing riders in front of me (not on a corner even, just on the straightaway downhill).  I went over the bars and landed hard on my right shoulder.  I let out a loud “UGHHHH” or two and a few guys crashed on top of me.  The wind was knocked out of me and I laid on the ground as riders got off of me and bikes were pealed apart from everyone’s limbs.  I saw Quinn on the ground, but he got up pretty quickly and headed over to the medical tent to stop his bleeding nose. Apparently my mom and a bunch of other people had seen the crash on Velonews’ live online coverage, with me at the bottom of the pile of carnage. I wish I could find the footage. 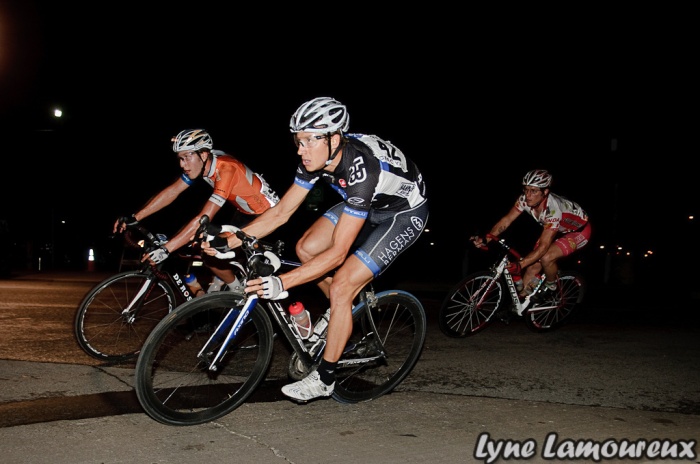 Yours truly before crashing. Photo from Lyne at Podium Insight. She was kind enough to give me a shout out about the crash and broken collar bone. Thanks Lyne. Check out her website for some awesome night time crit photos and great coverage of the rest of the races.

I thought I could continue to race, maybe, as I regained my breath.  I knew my shoulder was pretty screwed up but I lifted it to see if I could move it and I could, so my first thought was that it wasn’t broken.  As the massive amounts of adrenaline started to wear off though, I realized I couldn’t take a full breath of air (still can’t) and my shoulder and back began seizing up.  I began limping my bike over to the wheel pit area to get back into the race anyways, but half way into the walk over there I knew I wouldn’t be starting again.  I’d never broken a bone before, but I knew pretty quickly that my collar bone was broken. Damn it. It was a super exciting, fun race too…up until I broke something. The course was pitch black, wet, big crowds, hot out even at 10PM, and I was feeling great and finally taking the corners pretty confidently. Apparently I’m not indestructible like I had thought.

I got really angry for the next hour.  The race medics were dumb as shit and they didn’t think the collar bone was broken because they “couldn’t see anything poking through.”  No shit.  OK, for that matter these geniouses must be able to diagnose all types of internal injuries from just glancing at someone.  “Well, I can’t see any brain tumors from where I’m standing, so I think you’re in the clear, sir. Congratulations you don’t need chemo!”

After a lot of time standing around trying to organize a ride to the hospital, my teammate Ian and I were lead to a car by a woman who was going to the hospital anyways because her husband had just gotten out of shoulder surgery (from crashing earlier that week).  Ian was a super good teammate and friend and offered to go with me even though I said no at first.  He was basically my right hand man when we got to the hospital (I made that joke last night too–it was my right shoulder that was broken).

He did my paperwork, helped me hassle the idiot woman at the ER front desk about me not being able to sign my name properly because I was using my left hand to sign an “X”, cracked jokes about Sam’s mom, and made sure I sat down when I started seeing stars.  I had a pretty decent headache last night and right now, although my helmet doesn’t show too much signs of trauma.

My demeanor had been pretty poor up until we saw a chick with huge tits walk past us as we were lead to my second ER waiting room.  I mean, they were simply massive and not from being fat either, she was all natural and hot.  In a split second I decided I had the right to just blatantly stare, since I was injured.  Ian got the brunt of her apparent displeasure in my staring and got glared at since he wasn’t injured.

I began joking around a bit more after that as I realized I’d said enough swear words in the last hour to last me a month, and that being angry wouldn’t solve a fucking–I mean dang–thing.  I spent the next hour waiting for the idiot staff at that shitty hospital to get to work.  In the meantime I roamed around looking for bandages and things to steal as Ian shook his head disapprovingly.

Ironically I’d told Alan Adams, my teammate who broke his neck, that the injuries on our team were going to get slightly less dramatic over the next couple weeks. Turned out to be true. Also ironic, I just visited my other injured teammate, Chris, at the hospital a few days before we left for Tulsa and had felt extremely happy to not be stuck in a hospital, injured and off the bike like he was. So it goes.

We got to the run down shit-hole hospital, which was pretty empty, at 11:00PM and left well after 1:00PM.  This is what happened in the mean time, other than four different people coming in and asking for my address.

Turns out it was a teaching hospital. And a shitty one at that too. I imagine the University of Tulsa isn’t very high on the list of top medical schools in the states.

With all the time we had in our room to sit around doing nothing, I felt compelled to shoot a few wads of artificial semen–I mean foaming hand sanitizer–out onto the floor for someone to slip on. 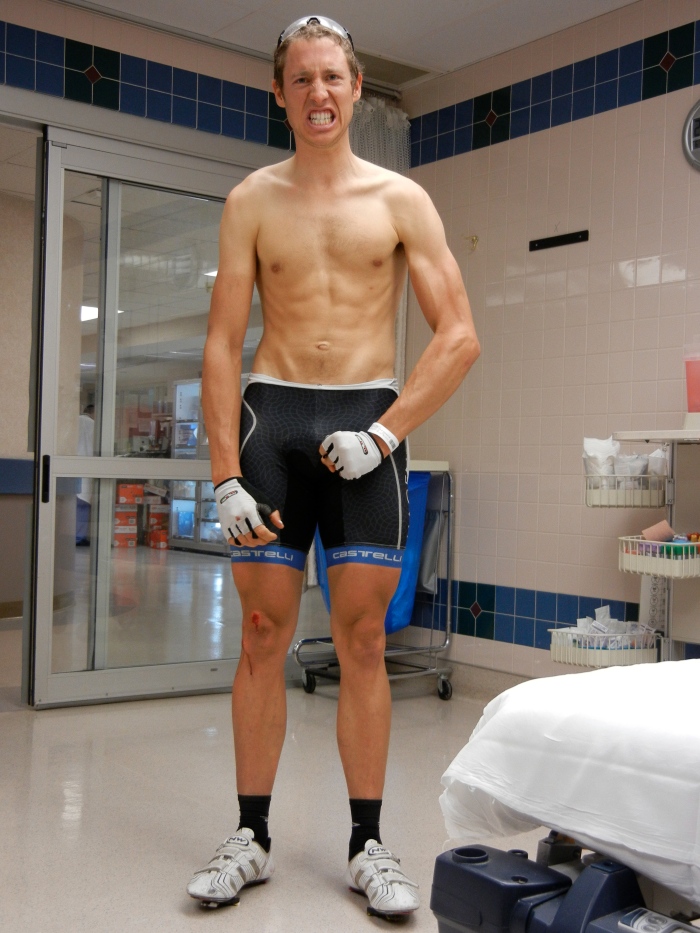 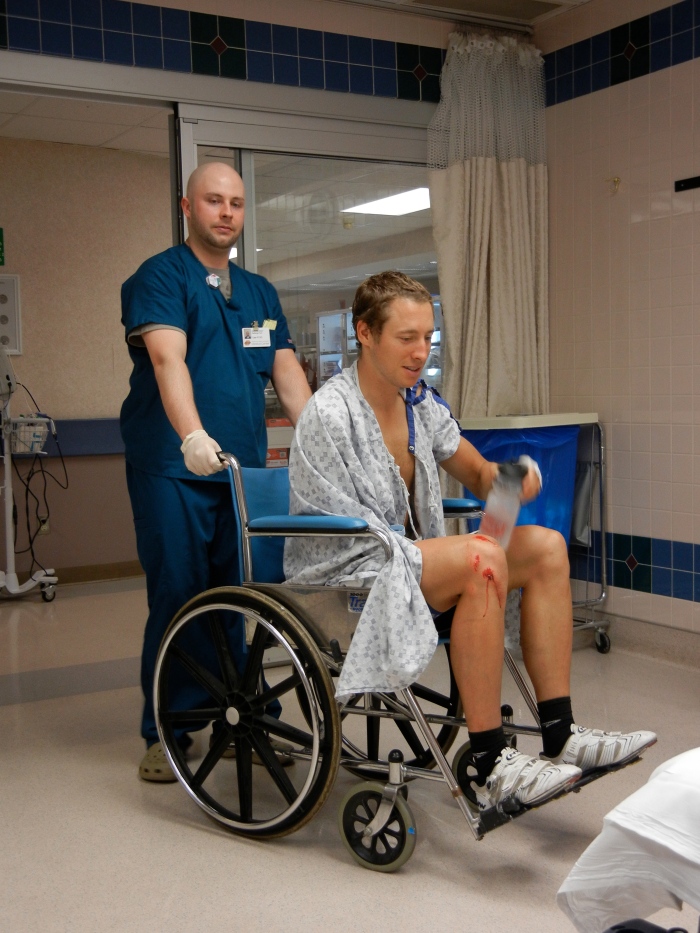 The stickers are going on my laptop. Looking at the X-rays with the technician, I could tell something didn’t look right, but he wasn’t sure if anything was broken or not. I still held on hope that it was just tweaked weird or something.

No one came to clean up my wounds, ask if I had hit my head, look into my eyes with a flashlight to see if I had a concussion, nothing. So I was left to scavenge through all the drawers and find the necessary implements to scrub out the small bits of road rash I had and bandage them up. Ian helped me cut some bandages with the knife on my multi tool. Then I wandered around in the hall looking for food and found us a few free cans of soda. We hadn’t eaten anything after the crit and it was well past midnight by now. Ian was getting a crazed look in his eye and I feared that he might start scavenging around in the biohazard trash can looking for spare body parts to chow on. 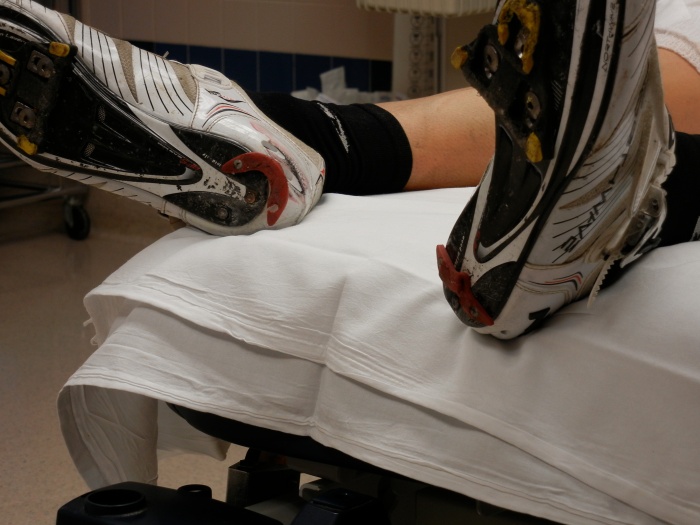 The bottom of my shoes took a beating in the crash. 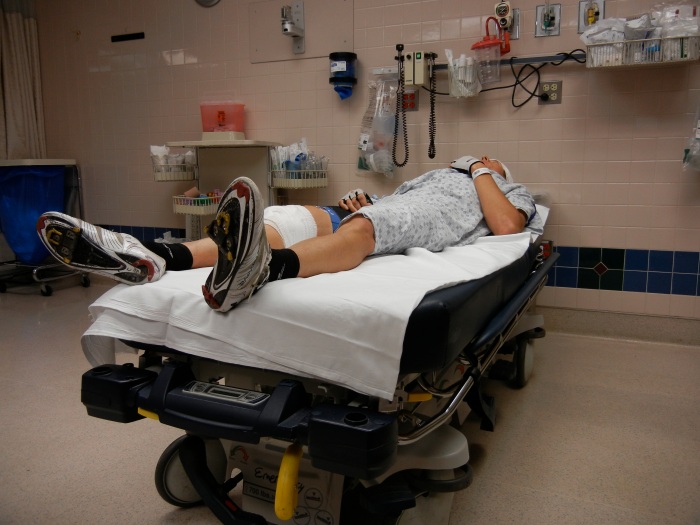 Finally the prognosis: broken collar bone. I got mad again. A nurse came in to give me an arm sling and she felt compelled to inform us that she “wasn’t from this hick state” when we told her we were from Oregon and Washington. “Oh, Oregon! I’m from Montana.” Soooo, you’re from a different hick state, that isn’t anywhere near Oregon? OK cool. Make yourself useful and go get us some damn sandwiches!. Ian was very rude to her because his blood sugar was getting low. 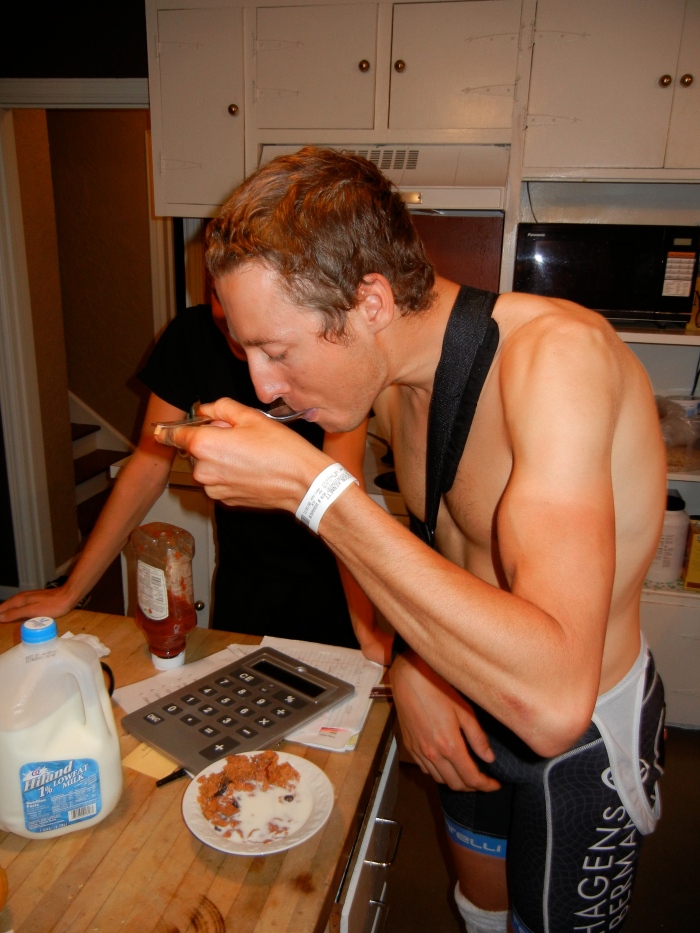 After another half hour of waiting for a ride, we finally got home around 2:00am and ate cereal. Spencer had held back on the five bags that had been there that morning and saved a quarter bag for us.

I wrote most of this the day after it happened (yesterday–Saturday), but now I’m home in Sherwood Oregon, missing the rest of Tulsa, all of Tour of America’s Dairyland, and Nationals. I’m guessing three weeks away from racing at least. I hope to be well enough to do White Rock and Cascade in July. Sucks to be off the bike now because I was finally coming into form like I usually do in the summer. But it’s bound to happen at some point. Broken clavicles are bread and butter injuries for cyclists. I’m not sure that metaphor makes sense. Anyways, not enough people clicked on my youtube video of Spencer, Ian’s and my ride the other day. So watch it. http://www.youtube.com/watch?v=QltVg5uwxuU