Last weekend we traveled to Whistler for IM Canada. Our flight to Seattle left at 6 a.m. Wednesday morning, which sounded like a smart idea when we were looking at flight prices. When it came to set our alarms for three in the morning we felt pretty dumb. We got to the airport at 4 a.m., thinking that would give us plenty of time, but there were so many people in the line for security that we barely made it to our gate, just 20 seconds before missing out on our precious B spots in the Southwest line.

We flew to Seattle instead of Vancouver because it was twice as cheap, though it did mean a five hour drive. Kennett got the rental car and they tried to up-sell him on a larger car than the compact we had reserved, explaining to him that it would be difficult for a small car to do such a long drive. Do some people really fall for that faulty thinking and opt for a gargantuan SUV? Small drive=small car. Big drive=big car. Extremely logical.

In our compact car we set out on our way to Canada. We stopped 45 minutes before Whistler to get groceries in Squamish because the prices were cheaper than what we knew food would cost in a resort town. We did absolutely no budgeting in the store, and came away with a $159 (Canadian) receipt for our entire week’s allotment of food. I bought two huge chocolate bars (and broccoli). Kennett bought enough rice to feed a small family for a week (even if all they ate was rice the entire time).

When we finally got to the AirBnB condo, the front desk area asked for our license plate because it was going to be $15 a day for underground parking. UUUUHhh. “Is there free parking in town?” The guy helping us said no, but there was $5 parking in a nearby lot emphasizing that it wouldn’t be a gated parking spot and someone could break in. Unlike the condo building, the $5 parking also didn’t charge after 5 p.m., so we got away with our first night for free. Yes, we take pride in simple savings like that, even though we never think twice about taking trips in the first place.

I personally loved parking a half-mile from the condo. The Nissan stayed in the same spot from Wednesday night until when we left Monday morning. There were two benefits about this. One – not driving for four days was a vacation in and of itself. Most of the time we spent walking or biking along paths so we actually had very little interaction with drivers at all. Second – I had to pay the day’s parking by 8 a.m., so each morning I had a reason to get up and go for a walk. I wasn’t racing, so there was no reason for me not to wander and explore around town.

Each day I found something new. I started by exploring where the coffee shops would be. Then I found the skate park and dirt jump park, and so on. We spent our time swimming in Lost Lake (Kennett didn’t do much actual swimming there), riding the top portion of the bike course, getting coffee in Whistler Village, and watching people at the dirt jump course, hoping that someone would take on the large jumps (only one person did). I also took a downhill mountain bike course and have a renewed passion to start hitting the dirt jumps at Valmont bike park.

Now on to Kennett’s race. Starting on Tuesday he developed a cramp that stabbed his right chest when he breathed hard or swam. I’m sure traveling with multiple bags to carry didn’t help it. The first morning in Whistler, Thursday, he visited a medical clinic to get a diagnosis (torn intercostal) and some medicine, which didn’t help much. I’m incredibly proud of him, not for his race, but for how he handled himself in the days beforehand. Walking out of the clinic he told me there was a two percent chance he’d be able to race on Sunday. I told him I wanted to build the bikes and he said he’d just build his on Friday and that he had no intention of riding. But he ended up building his bike that morning anyways. 20 minutes later I told him I was going to ride and he said he was going to stay in the condo to play chess. Then, upon second thought, he gathered himself back from his negative mood and rode with me. Actually, he was well in front of me, because I couldn’t hang on with my road bike.

His attitude improved considerably throughout the few days before the race, even when his intercostal tear didn’t. He prepped his gear as though he would finish the race. Though, the night before he told me he wasn’t going charge the electronic shifting on his bike. I almost did it on his behalf but by the time I thought of doing it we were in bed, trying to get as much sleep as we could before the 4 a.m. wakeup call. On race morning we headed down to the building’s bike storage and I saw Kennett’s bike hooked up to the charge. Once again, he had done the little things, the crucial details that can make or break a race. 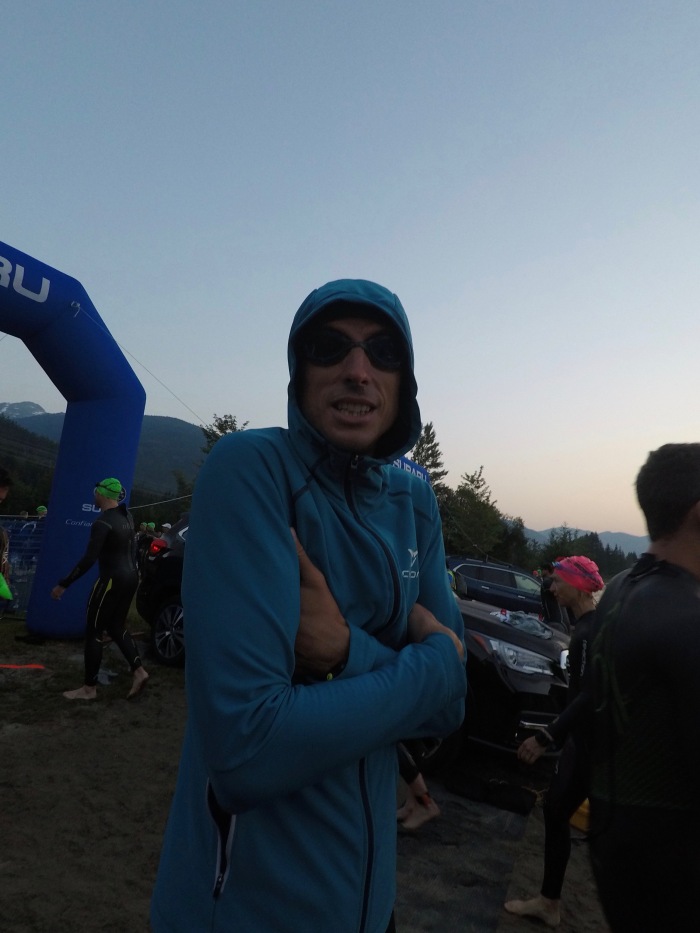 Kennett before the start, already shivering cold and hoping for the best. It was a non wetsuit swim in 72 degree water with 50 degree air temperature at best.

As you can probably predict, Kennett did not finish. His chest cramped too badly on the first loop of the swim course so he just came straight in instead of starting the second loop. I saw him actually stop in the water a few hundred meters out to take a break, and hoped it was someone else. When he exited the water he was shivering uncontrollably. In the medical tent they gave him three space blankets and coffee, which he couldn’t hold on to without shaking it all over his lap. He put on a pair of my pink socks and my Victoria Secret sweatpants with bedazzled sides. He looked absolutely ridiculous biking back to town with three space blankets tucked under his sweatshirt, as if he had an odd combination of a beer belly and a hunchback, while still wearing women’s sweats.

I’m just as proud of how Kennett handled the rest of race day. After we both took baths to warm up, I asked if he wanted to go for a hike. We picked one close enough to walk to the trailhead and packed two Snickers bars and three Paydays that Kennett had procured for race food. Why not make life a little better with candy bars?

We picked a 26km hike that went up and looped around to the top Gondola of Whistler Peak. It was by far my favorite day of the entire trip. Almost the entire hike was uphill and we got to see beautiful scenery above tree-line. We pointed out glaciers on nearby mountains and I joked about what we should do if we encountered a black bear. “They eat nuts and berries. Does that mean you should throw trail mix near them and then bolt when they start munching? If I worked the gondolas I would fill one with food at night and leave the door open. I’d wait for a bear to get on the gondola and then have him ride it. Each night I would slowly train him until he was ready to get his own ski pass for going up and down the mountain.”

When we did see movement in the trees I needed to quickly verify that it wasn’t a bear, because I think my ideas were slightly flawed. But the animal we saw wasn’t a bear, it was a fast-moving marmot, who darted between scree-rocks up the mountainside to our right. 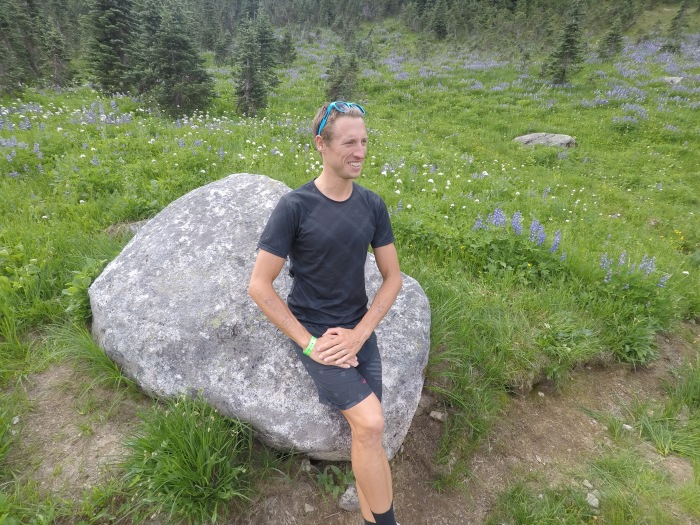 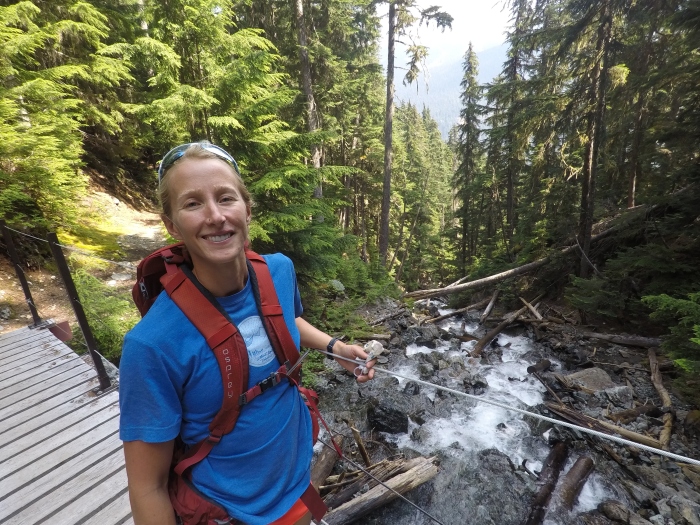 The absolute best part of the trip was when we found a small snow-patch that was melting and had left a freezing cold pond to walk in. Later we dove into a slightly less cold lake for one last refreshing alpine dip. Reaching the Gondola, we entered back into the world where people want to up-sell you for souvenirs, food, and transportation. Back in society unfortunately, but it was a nice break.

[Note by Kennett: nuts are not a natural food for bears, and the “berries” in the trail mix that Adelaide is referring to are actually raisins]