*Note: this list does not include other food that I ate.
**Note: I prefer short grain rice but the store didn’t have any.
***Note: This is probably on par with how interesting the rest of my race report will be.

It’s Still All About the Swim

My swim sucked. I was 20 odd seconds slower than last year, despite the effort being quite a bit harder than last year’s mellow swim, and came out of the water in 11th. I’m going to agree with anonymous Slow Twitch forum users that the course was 100 meters long. But more to the point was the fact that I came out far behind who I wanted to ride with on the bike: Jackson Laundry and Tyler Butterfield. I thought there was a slight chance that I could come out of the water with them (or close behind), work with them to bridge up to Matt Charbot whom I knew would be out of the water first, and then drop as many members of the group as I could on the hillier second half of the bike course.

While cycling is my strength, I don’t have the ability to drop everyone in the field at will like Starykowicz or bridge huge gaps when others are working together. I need people to work with and save those 10-30 watts in order to have a chance. Coming out of the water so far behind the leaders was a big blow, and I let that sink in too much as I started riding instead of altering my plan immediately and charging ahead with reality.

In the first few miles I let my mind go to a bad place, and struggled to see a positive outcome for my race. At the one and only turn around on the bike course at mile four, I saw that the eight or nine guys in front of me at that point had between three minutes and 90 seconds. I unwisely let myself believe that there was no way I could catch the leaders once the strongest guys came together in the next five or 10 miles, and that I would be left fighting for a top five at the very best, and likely only a top eight.

My power was good after that turn around though. I kept looking down and seeing mid to upper 300s during the first 15 miles, so I put my head down and went for it, pushing aside negative thoughts as best as I could. My power for the first hour was 330 and I wasn’t feeling tired yet. 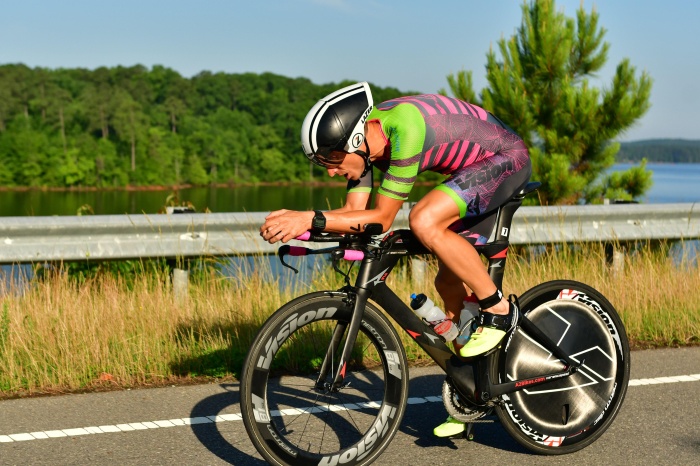 By mile 30 I had ridden into 4th, though for some reason I thought I was still in 6th or 7th, and my power was still holding at 328. A few more miles later and the hills started, which aren’t really hills but low-grade lumps or risers. Enough to warrant me coming to this race but not enough to call it a hilly course. Anyways, at this point I heard from Brian, our host who was watching with Adelaide and her parents on the side of the road, that I was in 4th with two minutes up to 3rd. I kept plugging away but quickly losing steam as I went, and finally caught 3rd (Tyler, who won last year) by mile 45.

I put in a surge as I came around on a gentle riser but wasn’t able to shake him. I continued riding hard, out of the saddle on the hills, and pushing 90% to drop him. At this point my legs and glutes were pretty dead, so after a few miles of putting the gas on I slowed in defeat and waved impatiently for him to come around, hoping that he hadn’t realized I was trying to drop him, and instead thought I had just been pulling for our two-man team. He eventually pulled through and let me know he was hurting and probably wouldn’t be able to help much, but just riding near someone else does boost the motivation quite a bit when you’re suffering.

Playing Tactics For No Reason

In the last five or six miles, after I had nearly crashed going over a huge pothole when my head was down, we both slowed to a relative crawl, effort-wise. Both of us were refusing to tow the other into T2 and burn our own match for the other’s benefit. Finally, with a quarter mile to go I saw him start punching his glute to get a cramp out. Shit. I’d been worried about him easily running away from me after T2, and had been soft pedaling thinking that I was being smart and conserving energy. Now I began wondering if he was just falling apart, as opposed to employing the same tactics as I was.

Sure enough, I came out of T2 and Tyler must have had an injury or been feeling really bad, because he didn’t start the run. I had lost 30 seconds or more playing that little game–30 seconds that may have been useful later on, though I doubt it had a true affect on my placing.

The Race of Pain and Agony

Looking at the run course map in the week leading up to the race, I assumed it would be a nightmare. A total of nine tight turn arounds and a third of the the race on a tight, potentially slippery bike path seemed like a horrible idea. I’m sure it was horrible for later racers once the course got congested with 2,000 people, but for me it was fine, and it allowed for a lot of feed zones. Starting out, I felt pretty good. I didn’t have any hopes of running down Jackson or Matt, who were three and two minutes ahead of me off the bike (respectively), but I thought I’d be able to hold onto third at least.

At the first turn around I saw that I had four minutes to Alex Libin, who I knew was a great runner from his performance at Oceanside and subsequent run at Monterey. My lungs were good and my chest was completely cramp-free, yet I was still struggling with self doubts for some reason, and kept thinking that I wasn’t pushing hard enough. My biggest worry during a race is that I’m not giving 100%, which I believe is much harder to accomplish than most people think. I’d rather get 8th and feel like I gave it absolutely everything than place 3rd and miss out on 2nd because I wimped out from the pain. This is one of the main battles I have going on in my head during the running portion of a race: am I going hard enough? If the answer is no, and I can’t seem to pick the pace up after agreeing that the answer is “no,” I enter a dark place of self disgust and my pace seems like it actually drops.

By mile six the gap I had on Alex was cut down to 2.5 minutes and I knew I was in trouble, but thought I could still hold him off. But with each turn around, as I counted the time gap, I lost more and more confidence.

During the last three or four miles I put in surges, slapped myself in the face at one point, let out a scream, and did everything I could to stay positive, pissed, and believe in my ability to hold him off. But it wasn’t enough, and my legs began failing me more and more with each step. It was a slow, hard, hot, humid course and even though my breathing was mostly controlled and steady, my legs just couldn’t sustain a faster pace than what I was doing for more than 20 seconds at a time. Each surge was short lived and futile, and by now I knew it.

With two miles to go I saw that I would be caught in a matter of minutes, so I put in another surge and quickened my stride momentarily. Then I died again and lost all hope. Christen Brown gave me some encouraging words as I came around her on her first lap and I surged hard again, getting mad and suddenly ready to keep fighting. A few hundred meters later and Alex was just behind me though, and since I knew there was nothing to lose I surged as hard as I could again to make him hurt for the pass. Maybe I could crack him mentally and somehow hold him off until the final straightaway, and then we could sprint it out.

But he blew by me like nothing, and the gap immediately grew to 30 seconds in just half a mile as I lost all hope once more.

The Jog of Shame

Defeated, I nearly came to a walk on the hill with a mile left to the finish. Adelaide was running beside me on the sidewalk at a few points, cheering and encouraging me as she cut across streets and parking lots while I made a big box towards the finish line in downtown. I had Alex in my sights at the straightaways, even though the gap was approaching a minute, and I put all my hope into him getting a cramp or taking a wrong turn out of sheer fatigue. I sped up again briefly as I contemplated these factors, but of course they didn’t happen.

I was angry, mad at myself for having such a weak mindset off and on throughout the race, and just overall let down that I missed the podium. This was a race I thought I had a chance at winning, and I ended up fourth again after fast-trotting the last quarter mile in depression, anger, and pain.

Fortunately I have a relatively short memory for these types of defeats and judging by how incredibly sore and tired I was the day after the race, I think I put in a good physical effort for what my somewhat tepid mindset allowed for that day. I got to enjoy the rest of the hot afternoon sunshine by relaxing and spending time with Adelaide and her parents, who had driven eight hours the day before to come watch me race.

Unfortunately, this is the last year that Ironman Raleigh will happen (a local organizer is putting on a grass roots race though), which is a huge letdown because it’s such a good, hard event in a place that I’ve grown to enjoy, even if a few of the local drivers are mean spirited shits towards cyclists.

Thank you to Brian and Michelle for hosting Adelaide, myself, and Maybellene, and of course a big thank you to my awesome sponsors A-Squared Bikes, Vision Tech, CUORE of Swiss, and Hammer Nutrition. Next up is Coeur d’Alene 70.3 in two and a half weeks. 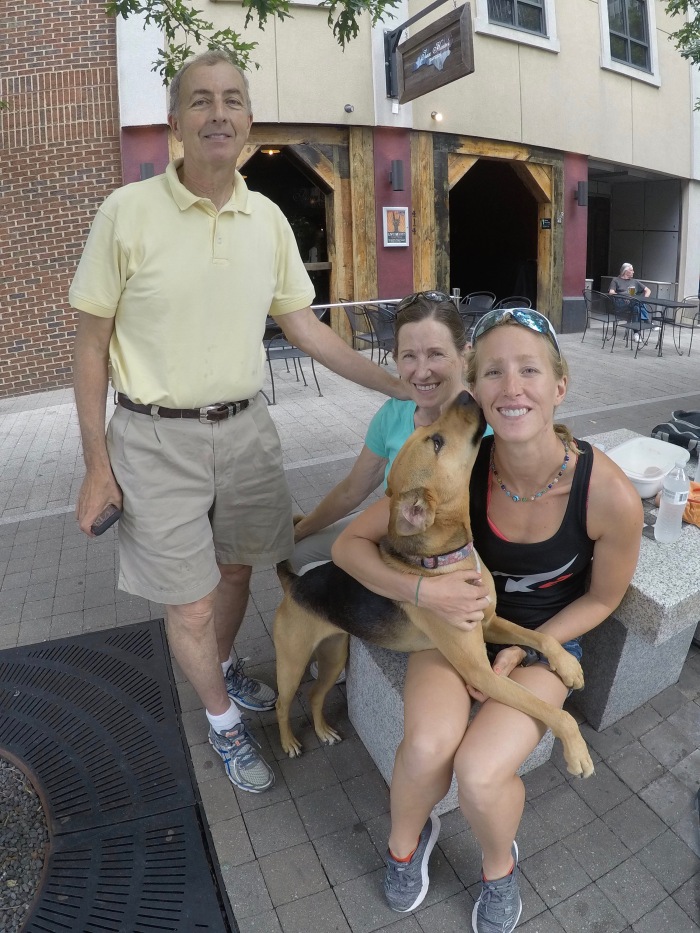