This past fall Adelaide directed me to a the Cycling House’s website to enter a contest for an all-expenses-paid trip later that winter. It required a short essay explaining just why you were so damn awesome. As I read the rules I thought, “Wait…all I have to do is write really good things about myself? The competition didn’t stand a chance!” And it was true. I’m pretty much in my own league when it comes to blagging (blog bragging). See, I just did it right there without even having to try.

But before I was awarded the Cycling House scholarship I actually had a long phone conversation with one of the owners, Shaun, about working for them as a guide. It sounded pretty amazing: riding in the sun all winter long and getting paid for it. But the more I thought about it the more I knew being away from home for four months wouldn’t work out…being a dog owner and all, and married. I was also worried that I wouldn’t be able to get the type of training I had to do in order to be competitive for racing, so I held out hope that I’d at least get the scholarship and get to spend the better part of a week down there at camp. When I heard that I had gotten the scholarship it couldn’t have come at a better time to lift my spirits because the day before I’d found out that I had NOT won the top prize in a literary competition (for Narrative Magazine) that I’d entered last October. In fact, my story wasn’t even one of the top 10 finalists. I sent them an angry postcard: “I’m disappointed in your literary acumen, and in the words of Ernest Hemingway, ‘Damn you with eternally crusty anus scabs.'” I am fairly certain he said something like that.

Anyways, for those who don’t know, the Cycling House is located in Tucson near the base of Mt. Lemmon. They also do guided tours all over the country and world, but this trip isn’t a tour. It’s pretty much identical to a host house at a stage race, except you don’t have to quietly sneak food out of the pantry when you think the hosts are occupied with something upstairs or out of the house. The Cycling House is a big, cool stucco mansion surrounded by saguaro cacti. They serve three huge, delicious meals per day, and all the rides are supported with a vehicle stocked full of ride food, water, and your extra clothing so you don’t have to have a back full of sweaty arm warmers and jackets.

I had the idea for the Cycling House about four years after it had already been created, though I still take some credit for it. It is exactly what every cyclist that goes down to Tucson during the winter dreams of when they’re stuck in a $200 closet they rented from a Craigslist pedophile. I’ve had some good years down in Tucson training with teammates and staying with friends, but I’ve never been this pampered before.

Day One: Travel to Tucson then an easy 90 minute spin. The sun was shining and there was zero snow on the ground. My legs did feel like bags of rotting manure though. Or maybe that was the stench of my unwashed bibs. Note: traveling with unwashed bibs spoils 100% of the other clothes in your bag. I have known this for years yet have done absolutely nothing with that knowledge.

Left to right: Chef Drew, David, Tom, Sheila, me, Judith, Tarak, Guide Brendan (Guide is actually his first name), George, Kem, and Guide Cory. The photographer must have been the fourth guide, Ian. 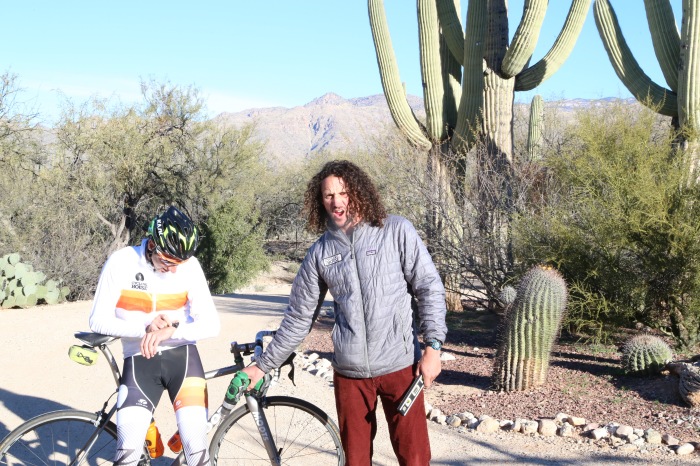 Drew on the right, Brendan on the left.

Day Two: Five hours around Saguaro National Park East, then a few times up to mile post nine on Mt. Lemmon for good measure. It was decided that I’d be able to ride on my own since my speed wouldn’t match that of the group’s.

Snacks galore with the Cycling House. I really had to go out of my way to not eat in order to bonk that first day. Here we have Tom refueling while Brendan refills bottles and Cory poses to look pretty for the camera. Work them hips, boy. 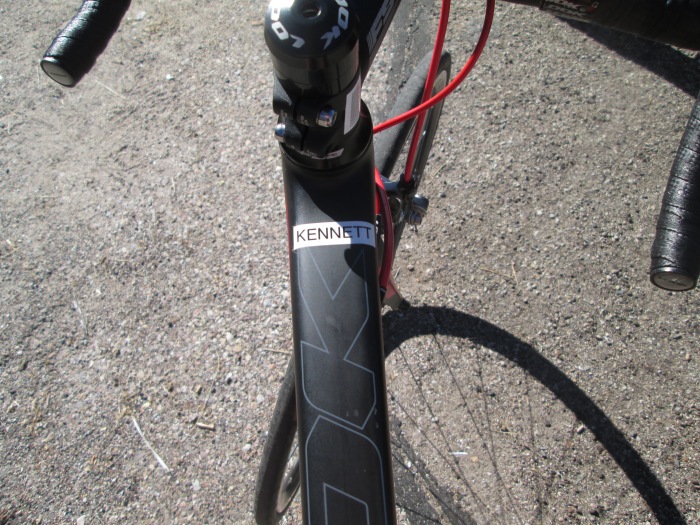 I’ve never ridden a LOOK before. Here’s my user review: It was made of carbon, rubber, and metal. It felt like a bike. I liked it.

Day Three: Five hours of Gate’s Pass and Saguaro National Park West. The highlight of the ride was eating at a Mexican restaurant a few blocks from A. Mountain afterwards. I actually preferred Chef Drew’s cooking, amazingly enough. The meals at the Cycling House are that good and large quantities of Drew’s blood, sweat, and tears go into that food.

Day Four: Five more hours of Mt. Lemmon. I also forgot to add that these past three days also included 30 minute swims to keep that all important water-feel (for us triathletes). Our group was half triathletes and half cyclists, with the triathletes going out on their own for trail runs just outside the house and a group swim sesh happening late afternoon (there was also yoga/core/stretching every morning and a number of clinics in the afternoons such as bike maintenance and descending skills). The third day of swimming included a winner take all team relay. Glory, that is. It was me and Tarak Vs. the guides, Corey and Ian, in a 2×100 race. Corey and Ian were given a handicap of having to “fist” 50 of each of their 100. For those not in the know, fisting is a drill used to work on the catch segment of the stroke and it’s exactly what it sounds like, you take your fist and firmly insert it…just kidding it’s actually not necessary exactly what it sounds like. Fisting is swimming normally but with fists instead of open hands. Anyways, the guides handily, or fistily, beat Tarak and I. I won’t go into detail about what the punishment (or reward?) for winning was.

Brendan and Sheila on the lower slopes of Lemmon.

Brendan, George, and Kem (not Kim–it’s a Canadian thing apparently)

Tarak and Cory doing what I assume is an in-air arm wrestle. Let’s just pretend this and some of those other photos were actually from Mt. Lemmon and not Gate’s Pass. 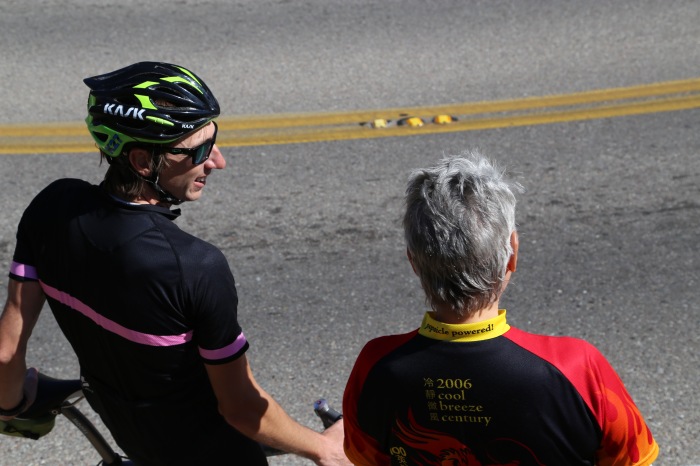 Judith and Brendan (how is Brendan in all of these pictures?) taking a break on Lemmon. 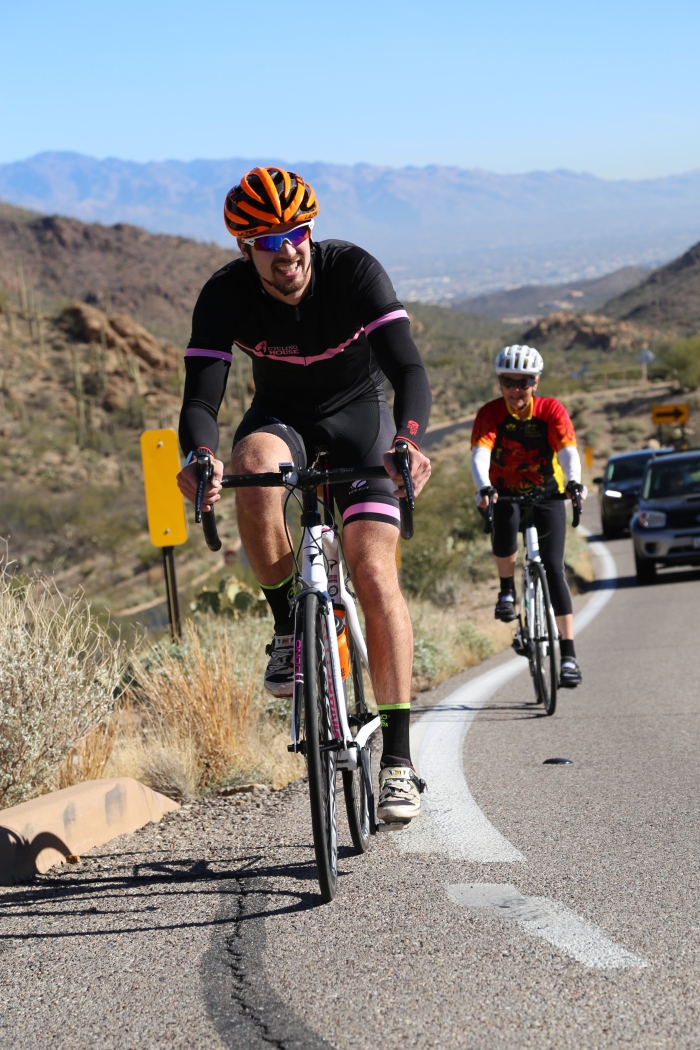 It was one of the warmest days on Lemmon I’ve ever had. I didn’t even really need the vest descending. Even better, I got about 11,000 feet and 90 miles in that day and felt like I could have kept going. It probably had something to do with eating 9,000 calories for every meal the past few days. 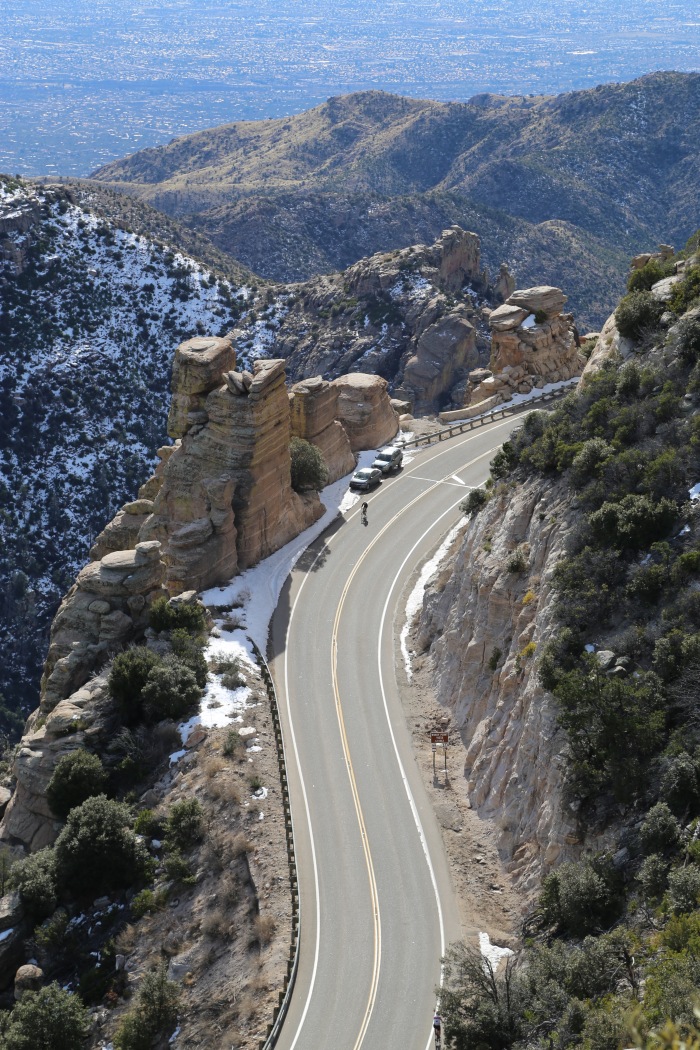 One of the best views of a road anywhere.

Day Five: Five more hours! I rode out to meet the group at Madera Canyon then went up it three times. I had planned to do the Shootout that morning but was too trashed to wake up in time for it. As always, I hated myself in the morning for not doing it. 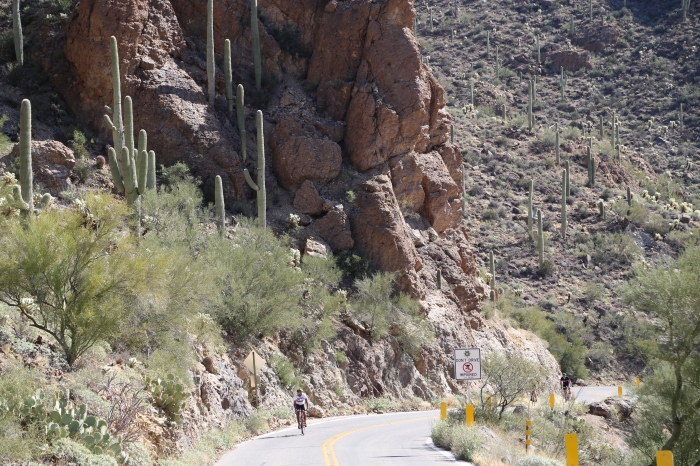 Not actually Madera. Another photo of Gate’s Pass, but I needed another riding shot here.

The last meal was tacos with all the fixings, including 20 kilos of freshly made guacamole. Just about all the food at the Cycling House is made from scratch, including tortillas, the cheese, wine, and the plates.

You can’t tell from the picture but that is a human sized bowl of guac that Drew actually uses for bathing.

That’s all she wrote. The Cycling House was an amazing way to start the year of training off right.I highly recommend it. Plus Tucson is always sunny and warm while the rest of the country is frozen, so there’s no better place to ride December through March.