I heard a loud carbon crunch, followed immediately by the gut-wrenching, soul-depleting hiss of a rear flat tire. I’d just been consumed by a pothole’s deep, race-ending teeth—one of the millions that littered the course. There were just three and a half laps left out of 14, and I’d suffered every minute of the race to get to this point. For every single lap I’d been hanging by a thread, on the verge of popping an uncountable number of times. All that agony only to flat out with 20 miles to go. I let my sailor’s tongue fly loose and loud.

I threw a hand up and pulled off the road, almost getting squashed by the caravan since I’d been on the left side of the road as I flatted and had to make my way to the right in order for a wheel change. The SRAM neutral car appeared out of nowhere to give me a quick wheel change. I was calm and cool as a pickle. I’ve learned to adopt an aura of peace during mechanicals, in order to give the mechanic steady hands and a clear head. Once I was going again, I resumed my earlier conversation: FUCKING FUCK YOU FUCK! AGHHHHHH FUCK!

Nick paced me back up to the caravan after I got rolling again, with me crunching and miss-shifting through a cassette that my chain wasn’t accustomed to; my drear brake was even more useless, failing to grip against the older style thin rim. I swore again as loud as I could, which helped fuel some extra adrenaline, not that I needed it. I swerved through the caravan with typical reckless abandon, knowing that my race was over but refusing to give in without one last push. There was little chance of catching back on after a mechanical or crash on this course at the pace that we were doing, especially this late in the race and with the shit legs that I had.

A tiny blossom of hope bloomed a minute later when I got a glimpse of the peloton up ahead, which was 50 guys at that point, down from 170 starters. A moment later I was on the back end, slightly confused as to why they’d finally slowed down—and just at the right moment no less. 30 seconds after that I was off the front, solo.

I was in no-man’s land between the break and the peloton—but off the front nonetheless, and with rekindled fire in my legs. I realized that we had finally given up the chase, but a top 15 was still on the line so I gave it everything I had left, which wasn’t much.

I superman tucked on a winding descent approaching 50mph, came back up to rest my forearms on top of the bars in the TT position for a couple hard pedal strokes, and saw my life flash before my eyes for the 99th time that day as a squirrel ran between my wheels. From that flat until now, it had been an action-packed five minutes. Although, not unlike the previous three and a half hours. Just a typical, chaotic, masochistic, incredibly dangerous, disturbingly painful bike race.

The Winston-Salem Cycling Classic is held in North Carolina in one of the cigarette capitals of the world, which is actually fitting, seeing as how out of breath the course leaves you. It’s an 8-mile loop through city streets, littered with potholes, steep climbs, and dozens of corners. It’s my favorite style of course, and one that I would have counted myself to be a podium contender had I been on previous years’ form. Today? I was just chewing my stem for dear life, punching tickets at the back for the first couple laps as rider after rider dropped away in the sweltering heat and equally blistering pace being set at the front while attack after attack launched up the road.

My teammates Michael Burleigh, Chris Winn, and Josh Yeaton had been slaying themselves at the front, getting in moves and being aggressors early in the race. Unfortunately the larger move got away just after Josh had been brought back from being up the road. George Simpson and I didn’t have the legs or positioning prowess to be of much use for the first five or six laps, and it generally takes more than three guys being active for a team to make the move.

But the race was not sealed up at that point by any means. Attacks continued flying as guys vied to bridge. Optum set a brutal pace on lap five or six. Then the pace duties were taken up by UHC a lap later. I won’t say that my legs ‘came around’ by lap seven; I think it’s more accurate to say that, compared to how I felt earlier, I was just slightly less fucked over than those who were still left in the field. Even that might not be accurate now that I think about it. I was actually on the verge of getting dropped, which meant that I needed to attack.

I went half a dozen times, countering myself until I finally got away solo after the feed zone on lap 8. My intentions at that point were to just get most of the way over the KOM climb before being caught, because I knew I wouldn’t be able to make the front split (or chase back onto the front split) even once more.

Max Korus of Team QCW came across to me. He’s got a huge ass and is as tall as me so he makes for a great draft. Despite that, it was still hard to hold his wheel. I told him how fucked I was and that I’d only been attacking because I was about to get dropped. He admitted the same thing.

If you’re going out the back, you might as well first try and go off the front. We got to within 50 seconds of the lead breakaway and had a decent gap to the field. Screw getting dropped, the race was on!

We worked together and made it almost all the way up the climb before the pack caught us. My teammate Chris and about eight others blew by at twice my speed with a big gap 75 meters from the top of the climb. The final pitch is the steepest section, averaging about 15% if my memory serves correct. My legs were gone—as weak and dead as toothpicks at that point. I was gasping for air. But I made a snap decision. I was going all in to make it back onto that group. I let out a roar and sprinted as hard as I could to regain the wheel and make it onto the back end of the group just as they crested the climb. I was totally blown at the top, having just done a race-finishing effort, but I made it. This was the selection. It had all the strongest guys left in the peloton and the right teams. Then we sat up.

Max and three others kept riding when someone let their wheel go. They were never to be seen again. We were absorbed by the remnants of the peloton as Max and the others pushed on up to the break, catching them shortly after the finish with three laps to go.

Josh had been on the sidelines for over an hour helping out in the feed zone after getting an early flat. During his frantic chase back on with Nick in the team car, a police officer had nearly caused disaster when she stepped out into the road in front of Nick, who was driving 50mph. Luckily Josh swerved out from behind Nick in time but he never regained contact with the peloton. 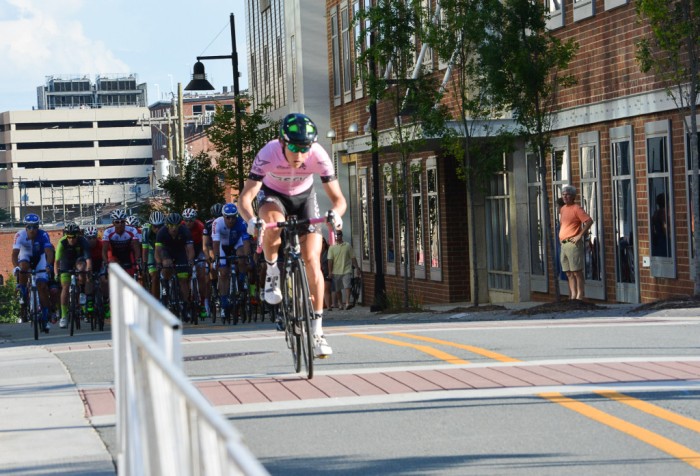 Josh attacking in the crit the day before  (Photo: Bob Simpson)

Michael had nearly died of heat exhaustion and was in the feed zone too; both he and Josh were doing what they could to give us a hand, which is always awesome to see because I know how upsetting watching a race from the sidelines can be. 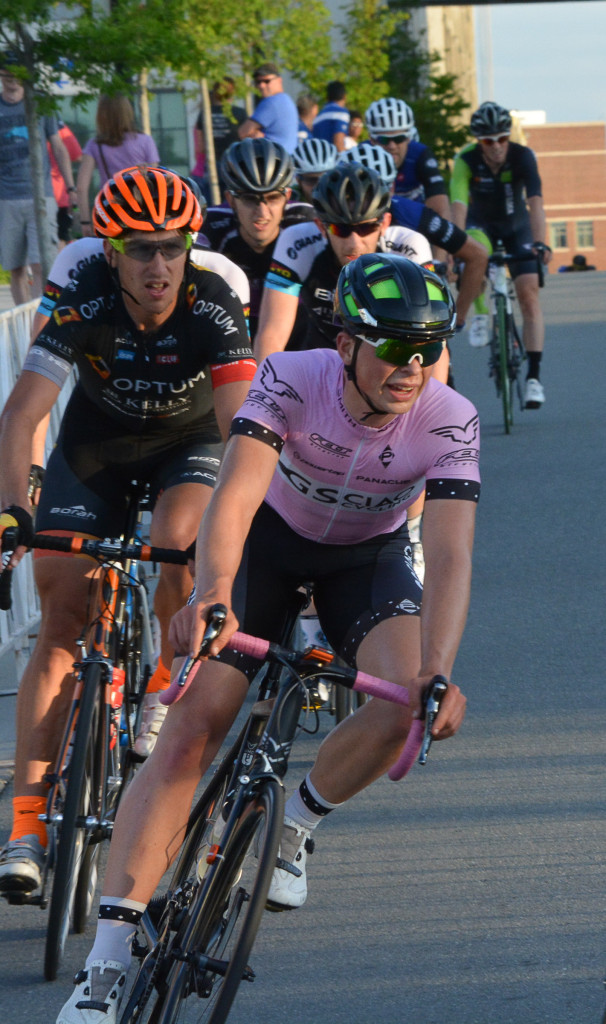 George in the crit the night before (Photo: Bob Simpson)

George had held on as long as he could, chasing back on lap after lap (with me in tow many times) after the climb. But he was out now as well, handing out bottles. It was just Chris and I left in the race and we’d just been soooo close to both making the winning move. In some other universe…

Ha. I kept attacking. I flatted eventually, which brings us back to the starting point of this post. I was off the front solo with two and a half laps to go and had just avoided death by squirrel. My legs were losing power with every pedal stroke, but I could no longer see the peloton behind. They’d pretty much sat up since the winning move totaling 14 guys was long gone up the road with a three minute lead. I went as hard as I could for the next lap and a half before getting caught with one to go. There would be no more attacks from me. I followed wheels and suffered every minor acceleration, just like everyone else at that point. Our group shattered on the final climb. Chris, who suffered a slow leak on the final lap, came in 31st and I came in 39th. It was a shame he wasn’t in the position to put good legs to use because he was on a killer day. I on the other hand, was satisfied. I could finally feel my old self coming back to life and I was pleased with how hard I pushed it. It was by far the hardest race day I’ve done this year and seeing my form come back, even just a little of it, has given me some new motivation to race bikes this year. 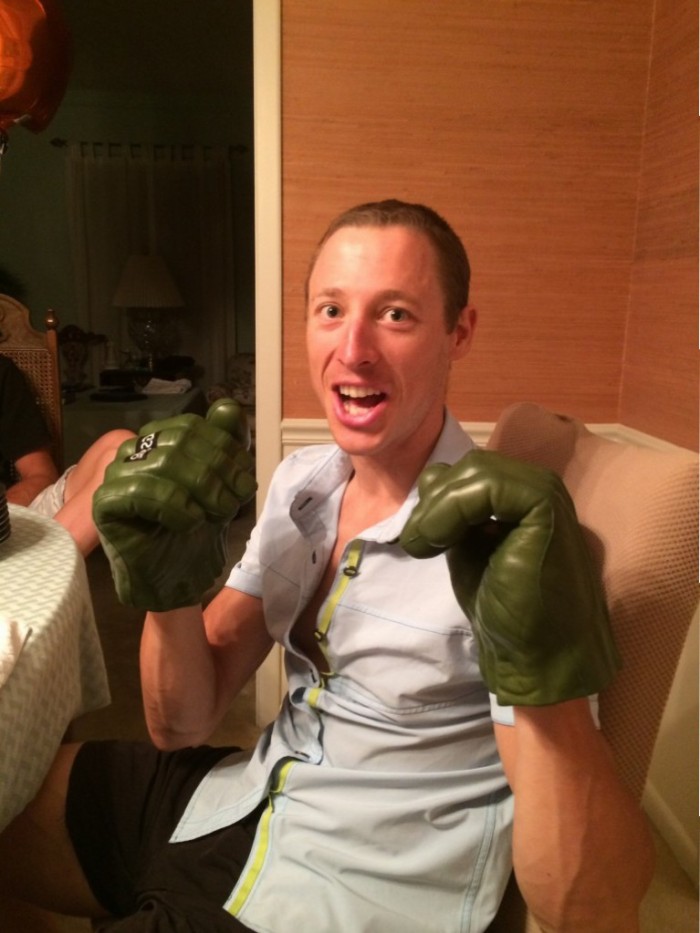 I was awarded the team’s Hulk Hands for the race. An honor and a privilege.