People lie. Especially when they’re about to be held accountable for something.

Oftentimes, drivers initially admit blame when they hit a cyclist, only to backpedal as fast as possible once they talk to the police or their newly hired lawyer. They’ll come up with excuses in no time, proclaiming the sun was in their eyes despite it being high noon, fudge the truth about actually coming to a stop at that stop sign/stop light, “forget” that they were texting and driving, say the cyclist swerved out in front of them, and generally make up any number of ridiculous lies that might save their ass.

And that’s why I decided to get cameras for the front and rear of mine and Adelaide’s bikes. I’ve literally had thousands of close encounters, either from drivers unintentionally dozing off into la-la land or from psychos purposefully playing with my life. I’ve been hit three times in the last nine years (I’ve was incredibly lucky that I wasn’t injured or knocked off my bike in any of those cases). Obviously a camera won’t save me from getting hit, but it will provide the evidence that helps decide if the driver was at fault, and whether it was “careless” or “reckless” driving that caused the collision. And it will catch the driver who tries to get away with a hit and run.

Police will most likely side with the driver or at least show leniency when writing the ticket if they find the driver to be at fault. Same goes with the DA or judge. Without solid proof, it’s difficult to get a good conviction in our (the cyclist’s) favor and it’s easier (legally) for the driver to be let off with less than a slap on the wrist. Police officers drive cars, they don’t ride bikes. The people who make and uphold the law don’t ride bikes, they drive cars.

We’re the minority, obviously, which is why “I didn’t see him” still flies in this country. In reality that equates to “I wasn’t paying attention while operating my deadly weapon because I don’t really care about anyone else’s life.”

It’s selfishness that keeps unsafe drivers out on the road instead of being locked up behind bars or at least stripped of their driver’s license. Not selfishness on the part of the driver, necessarily, but selfishness in the people who make and uphold the law–that’s US–the voters, law officers, the jury. We can all imagine ourselves in their situation: Just driving along looking down at google maps for a second and CRUNCH there just went somebody’s dad under my wheel. Hey it was an accident. I didn’t mean to drift off to the right into the bike lane. Should I have to spend five years in jail and never be allowed to drive again in my life? No. And neither should anyone else. A $400 ticket and 30 hours of community service should suffice. Accidents happen. Shit happens.

Moreover, get a job and a car you dirty bum.

That’s why there’s no real penalty for killing a pedestrian, cyclist, or another motor-vehicle driver. We’re looking after our own asses. Ironically, that mindset creates an even more dangerous environment. We’re a stupid species, us humans.

One of the ways we, as cyclists, can “earn” fair treatment from the law is to compile as many close calls and collisions as possible with witness and video evidence–we need to bring mass attention to the issue with some Shock And Awe, if you will. And nothing attracts a person’s attention like a violent collision. We need public outrage. Hell, we need more cyclists’ outrage. Why aren’t you outraged damn it!!!

RIDEYE cameras are cheap and easy to use. They have 24-hours of battery life and record on an infinite loop, meaning that the oldest footage of your ride is constantly being erased to make room for the new. Even on a six-hour ride the memory won’t be used up for that crucial last hour when you come back into town or navigate rush hour on your commute home. You can choose between a 2.5-hour loop or an 8-hour loop. I opted for the slightly cheaper 2.5-hour, though I sort of wish I had gone with the 8-hour so I could recored entire rides. You know, because road training rides are so entertaining to watch.

The quality of the RIDEYE is great: 1080p. You can capture license plates and easily figure out the make and model of a car if it’s a hit and run. Plus, the RIDEYE has an accelerometer built in that senses when you get hit, immediately saving the footage leading up to the collision.

The mounting system is easy and, so far, seems to be bomb-proof. It’s made of heavy rubber and comes with a  replacement strap just in case. The whole camera is on a ratcheting swivel mount that mostly stays put while riding but allows you to easily twist it around to capture different angles. I say “mostly” because after a long day of dirt roads, it does start to tilt downwards just a hair. It’s easy to straighten though: just pull it up.

Yes I know my bike is dirty as hell. Both cameras are still working well despite being ridden in some pretty awful conditions (mud, water, snow, chemical salt bath residue). 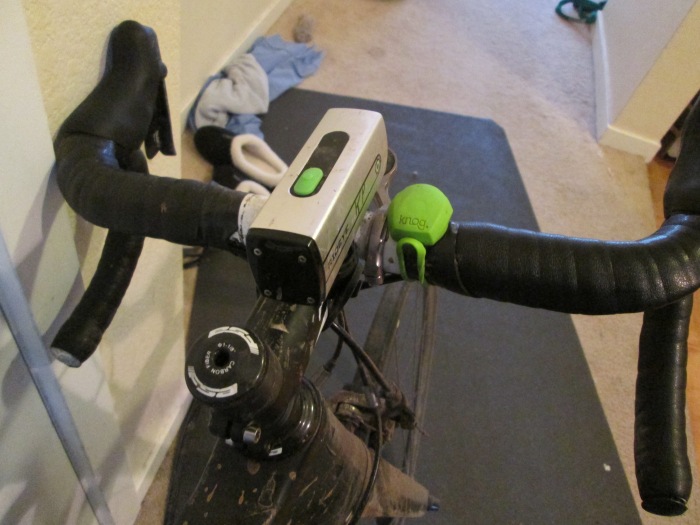 You can mount it on either the bars or the stem.

An unfortunate reality of the RIDEYE is that I have to choose between having a fender, the RIDEYE, and a large saddle bag. As technology decreases in size, I’m sure I can have all three at some point, but for now I’ll forgo a dry ass.

The rear mount is made of strong plastic and stays put. The camera, like the front, can easily be taken off with the rubber strap. (Front and rear cameras are the same exact thing).

The price I paid for all four RIDEYE cameras: $500. Price for a single GoPro Hero 4 (1080p equivalent): $400. The GoPro, Garmin, and Shimano cameras also don’t have nearly enough battery life or memory for even medium length rides. With the RIDEYE you don’t have to clear the memory or even take it off your bike every day. Just turn it on when you head out the door and turn it off when you get home. The infinite loop makes things super easy. Charge it once a week or once every other week, depending on how much you ride.

*Note: the price went up to $350 for a front/rear combo since I got ours. Get in on that sale before the next price jump.

Here’s a super short video I put together of pieces of my rides the past week in no particular order. Note: when the roads are wet and dirty you have to wipe off the lenses every once in a while with your finger, otherwise you can’t see shit.

Since Youtube doesn’t select the best video quality automatically, to view in HD make sure to click the “settings” button at the bottom right hand corner, click on “quality” and then scroll to the top of the menu for “1080p HD.”

PS I’m not making a dime on any of this and RIDEYE is not a sponsor of mine, just in case you were wondering.

The sad thing is that some cyclists are inattentive drivers when they get behind the wheel as well. Most of us are crappy drivers from time to time. Hopefully we’d at the very least own up to it if we ran someone over. Don’t count on that happening when you get hit though.

Get a camera for your bike. Document the shit that happens to you on a weekly basis. Post it to forums, social media, and submit it to your local online paper. Report collisions and reckless driving to the police every time. No one deserves to be let off the hook after they’ve threatened your life, whether it was on purpose or by accident. It’s only a matter of time before you get hit. Might as well document it.

9 thoughts on “The RIDEYE Bike Camera”