As social animals, we’re hard-wired to take pride in group efforts. While personal results are what many of us strive for in cycling and life in general, it’s always heart warming to be part of a team effort, especially when it ends in a huge success.

The Uptown Minneapolis crit was packed with spectators. It’s usually the rowdiest event I compete in and this year was no different, with somewhere between 30,000 and 300,000,000 people in attendance. A bad crash in the women’s race delayed our start to 8:20 PM and also shortened the race from 40 to 35 laps. I expected a dark finish.

I got off to a perfect start with a line up at the very back, which meant I had no chance of getting in the early breakaway that won. Wait. That’s the exact opposite of a perfect start. Man I’m so dumb sometimes!

The rest of my race unfolded as follows:

2) Got stuck behind a large crash and went to the pit.

3) Did four or five more laps before I jammed my brakes on again in corner three to avoid another pile up. Went to the pit and in the process jumped ahead 20 spots from where I’d been before the crash. I hate it when people do this when those people aren’t myself.

4) Karma came back to get me a couple laps later. I managed to keep upright again through the second to last corner when the guy in front of me rolled his tubular. I thought the danger was over as I clipped back in and slowly started rolling forward, but someone came from behind and crashed into me, bending my derailleur hanger. I went to the pit for the third time that night.

5) I finished 8 or 9 laps later in 38th place with the same time as the main group. Got to bed well after midnight once Nick, our host Chad, and I were done doing bike repairs. Faith made sure we had plenty of burritos for the van ride home.

As the second and last road stage, I intended on making my mark on the race today whether it liked it or not. Of course I failed and was pretty much just pack foder. The course was 100 miles with some steep but short climbs. I had good intel that the break would go away early (as did everyone else), so I made sure to attack early and often in the opening miles (as did everyone else). The goal the team had set out for ourselves was to get in the move and scoop up the KOM points, since there were 30 on offer today and whoever won the majority of them today would likely win the overall by the end of the week.

I followed the first move that went. I don’t remember how many I went with afterwards, but my normalized power for the first 40 minutes of the race was 370 and the max was 1,568, which is a lot for me since I’m a pretty lousy sprinter. The entire team covered move after move and attacked non stop. We had a guy in every attempt for the first 30K until Fabio ended up finding the successful one. He would go on to take all the remaining KOM points, the KOM jersey, and second place on the stage behind Tom Devriendt (3M) since the breakaway held off the field by a half minute.

The rest of us back in the peloton helped each other stay close to the front and Mac grabbed plenty of bottles from the car to disperse among us. After that first hour of attacks, the middle two-thirds of the race were tame and boring, though I was definitely feeling it in my legs. I thought I came here in good shape, but I was currently learning the hard way that by June, there’s no substitute for race days, of which I’ve had few this year.

As we entered the final hour and a half of racing, the clouds opened up. The rain was heavy and cold and I immediately began shivering. Everyone’s moral took a turn for the worse and we talked about how they might (hopefully) cancel the finishing circuits. I knew they wouldn’t. We all did.

I quickly ate the rest of my food to help stave off the cold, but within 20 minutes I was shivering uncontrollably. The rolling hills approaching the finishing circuits shed more riders and finally a couple guys crashed at the bottom of a hill. It was incredibly hard to see with the dark skies and thick wheel spray, but I kept my sunglasses on since it was impossible to see anything without them. There were still 20 miles left to race.

I was way too far back by the time we entered the technical finishing circuits, and was on the verge of giving up and letting the gaps go unclosed once I’d completed the first of four, 2-mile laps.

Each lap had 19 corners, I could hardly see from all the wheel spray, my brakes were barely functional, my legs completely and utterly zapped of strength, and my motivation for a stage placing was gone since the breakaway was going to stick. But everyone was in the same shitty situation as I. We were all cold and tired and didn’t want to crash on the slick pavement as the rain continued pissing down. I decided to harden up a bit on lap two and did everything in my power to stay in contact, including some risky chops that I later realized weren’t worth taking.

Sprinting out of those corners the final two laps and closing down gaps to finish 55th was, at the very least, character building. I was the last rider to come across the line with the same time as the main group. Looking at my power back home after the race showed that I am indeed not as strong as I thought, and the last 30 minutes of racing weren’t even that hard. Hard being a completely subjective term.

We were all ecstatic to hear that Fabio was in the KOM jersey and took 2nd on the stage. Faith and Nick rewarded us with a round of hot chocolates before the long drive home. 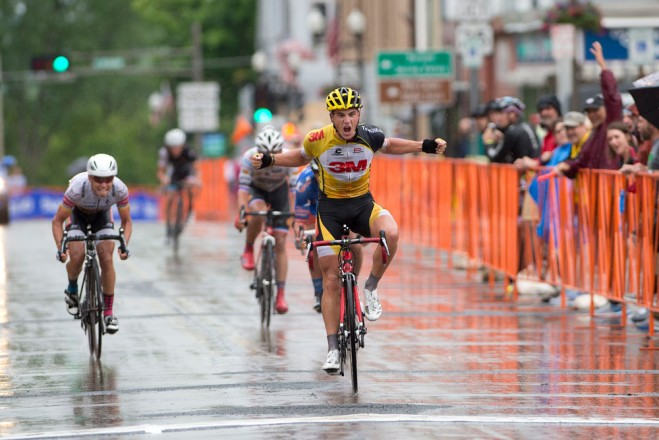 At 26th on GC and not currently enjoying great form for such a demanding crit, I knew my personal race was going to take a backseat to Fabio’s and Chris’. Stillwater is 23 laps (which is also roughly the average gradient of the first part of the climb) and 70 minutes of pure anaerobic blood lust. If you want to see pain, there are few places better than standing near the top of Chilkooht hill. The crowd was big, loud, ambitiously drunk, and ready to see some grown men crack! (Not to be confused with grown mens’ cracks).

Our primary goal was to keep Fabio’s KOM jersey. All that we needed to do was make sure neither the 2nd nor 3rd placed KOM guy won all the sprints. Also, if Fabio scored just four points, he would seal it up. The easiest and quickest way to get the jersey was to have a break up the road early on that soaked up the first KOM sprint points.

Our secondary goal was to position Chris for the final lap so that he could take a shot at the win the last time up the climb. He’s been top 10 and top 5 there for five or six years now, so we knew the finish was good for him. Normally this sort of finish and race would be great for me as well, but I knew that I was lacking the form needed for this sort of effort, and even lasting to the finish with the lead group of 20 guys would be a tall task for me.

The race started with a searing effort from the base of the climb. Like all the other crits, I was near the back for the start but today wasted little time moving up into position. By the third lap I was where I needed to be, and attacked near the top of the climb. I made contact with the lone leader (Team 3M) a lap later at the base of the climb and we powered up it under a thunder of cheers and screams. At the top of the course we were bridged to by Ben Jaques-Maynes (Jamis) and one other guy. The 3M guy let a gap open to them a minute afterwards on the descent and I didn’t have the legs to close it. I cursed at him, we sat up, and the pack consumed us shortly afterwards. I was completely gassed by the effort and got shelled two laps later. I pulled out of the race after coasting for a lap and spent the rest of the hour in the parking lot sitting in a chair by myself, incredibly depressed but somewhat content to have done something of at least a little value for the team to help retain the KOM jersey. 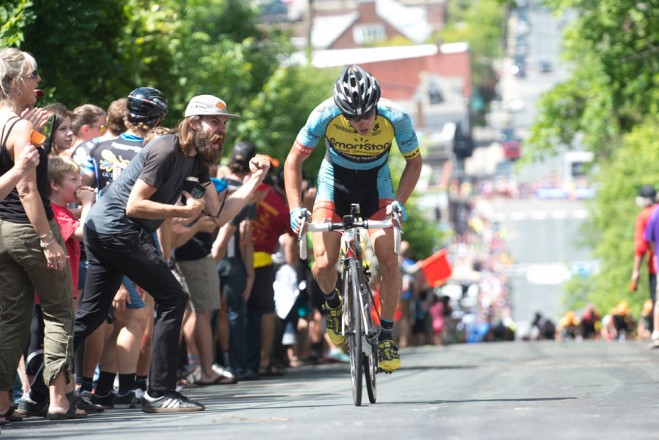 Fabio kept the jersey and ended up 12th on GC, Chris was 5th on the stage, Mac had a great ride for 31st, surprising himself but not the rest of us, and Emerson stuck in to the bitter end. Kit, who’s eye had swelled shut the previous night from either a scratch or bacterial infection, held in as long as he could and made sure to squirt eye juice at anyone who got in his way. We also finished 4th out of 24 squads in the team classification, which doesn’t earn money or bragging rights per-say, but shows depth. This week was a huge success for the team and I’m looking forward to the next race I get to do with them. 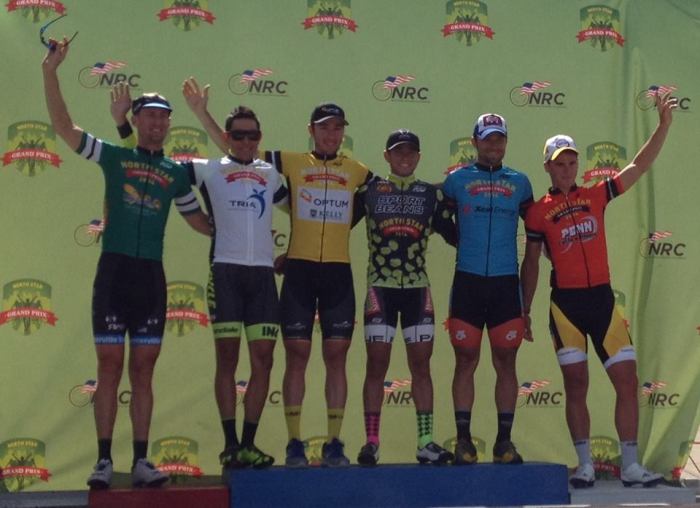 Fabio in the Sports Beans King of the Hills Jersey on the final podium with the rest of the jersey winners.

As for my own North Star GP, I was pretty let down. Last year I was one of the strongest in the race (until I got sick and DNFed, LOL!). This year I was only “okay.” It might take me the rest of the season to get back to where I was in 2013, or I might not get back there until next year. Who knows. The stress of being a part of the fiasco that is Firefighters “pro” Cycling, the lack of racing, the lack of knowing my future, and just the constant let down and battle with the management has destroyed my legs and my season to date. There will be more news about this in the next few days.

To end things on a high note, I’m back in Boulder, it’s sunny and warm out, I’m eager to go train, and I’m sick! Oh wait, that’s not a high note! Silly Kennett!