It was Monday. I was pacing Adelaide from behind (um..) during a brutal set of 4×20 minute intervals and I had Simon & Garfunkel’s The Only Living Boy In New York stuck in my head for hours, only I’d replaced the words with ‘The only US Pro in Boulder.’

This wasn’t one of those times, Simon. And I can easily tell you where I wasn’t: Chattanooga, TN for the US Pro national championships. And I won’t be at the Parx Casino Philly Classic, Tour de Saguenay, or Tour de Beauce either–the biggest month of racing of the year and our team is missing it all for no good reason. To add to the embarrassment and disappointment, our names are even on the start lists. Classic being listed as DNF when you’re sitting at home throttling pillows and cursing violently into an empty room. Depression, LOL.

My legs have decided to come around at last. My mind and body are strong once again. But instead of vying for the stars and stripes, which I’ve been dreaming about pretty much every single damn day since September, I was stuck in crummy old smelly old, stupid old Boulder, riding the high mountains with friends by day and eating at barbecues by night. It was an alright time I guess. Actually, last weekend was one of the best I’ve had in quite some time. While watching the US pro championships on the computer wasn’t the way I hoped I’d experience it, I was in a good place nonetheless. I had bigger fish to fry anyways. Well, not really. But I did have training rides to crush!

Since all I’ve been doing is training, that’s what I’ll write about today. But first I have some good news and some bad news. I’ll start with the good news: the good news is there’s no bad news. Now, onto the matter at hand:

Let’s see, where did we leave things after my last blog post? Ah yes, on one of the many cliff hangers of my life’s story. It was mid-week, I’d just come off a successful Superior Morgul, and I was on the verge of finally feeling normal and good on the bike again. I smartly rested Wednesday after my day of manual labor. My hamstrings were the worst off in terms of damaged body parts, likely from doing physically exerting things that didn’t require pedaling.

Thursday was my breakthrough, the day I’d been waiting and praying for since I got back to Boulder in April. I went out for a set of VO2 intervals and wheezed and whimpered out my second best set ever. A huge relief. I ran into Matt Cooke as I descended Old Stage after the last interval and soon, instead of tapping out a few extra hours of easy tempo and zone 2, I found myself glued to his wheel heading up Linden, staring intently at his rear hub while he did an effort to open up for Nationals. Five minutes at his pace was all I could take, then blew sky high.

It was a week full of riding buddies. After cruising a bit more with Matt I met up with Stephen H and Nick T for more climbing on Sunshine and Flag. All this human interaction! And there was even more to come. If only I liked humans.

Adelaide and I had a friend, Travis Furman, staying with us for the weekend. We’d met in Tucson this winter and he also happens to be the teammate of a certain Mike-L SencenBoss. Travis drove out from Oklabraska or somewhere flat and boring filled with corn, so I was excited to blow his mind with some mountains. He, me, Adelaide, and a group of Horizon Organic thugs including Ross and Jackson’s roommate, set off the next morning from Spruce Confessions, a Catholic-themed coffee shop that paints sinful images in your latte foam to scare you into repentance.

We climbed, flatted a tire, climbed Deer Trail at the top of Lee Hill, descended, and flatted another tire. I ended up riding mostly by myself that day because I can’t stand riding with a bunch of people who keep getting flat tires, even though it was me who got the flat. I ventured to the end of Flagstaff, searching for the secret, magical road that leads to Magnolia. I never found it, or if I did I wasn’t sure I was on it, so I backtracked and did the Gross reservoir to Coal Creek route instead. That night we had two barbecues to hit, so getting home at a reasonable hour was necessary. I would be drunk when the first sip of beer hit my lips.

Sunday. We met Jackson, Nick, Fabio, and Nate at the other Spruce Confections downtown. Adelaide split off to get a head start up Flagstaff as we waited 13 hours for Kit to show up, then we went up Flagstaff, Gross Reservoir, Gap road, Golden Gate park, Peak to Peak, Nederland, down Canyon, then up Sunshine. The weather held, as did our legs, for the most part. A brief moment of torrential rain sent us scrambling off the road for the shelter of the trees, but aside from that the day was incredibly pleasant. Lots of elevation, the lovely smell of pines, dirt roads, and very few cars. It’s my absolute favorite loop to do and the riding buddies proved to be good enough company as well. 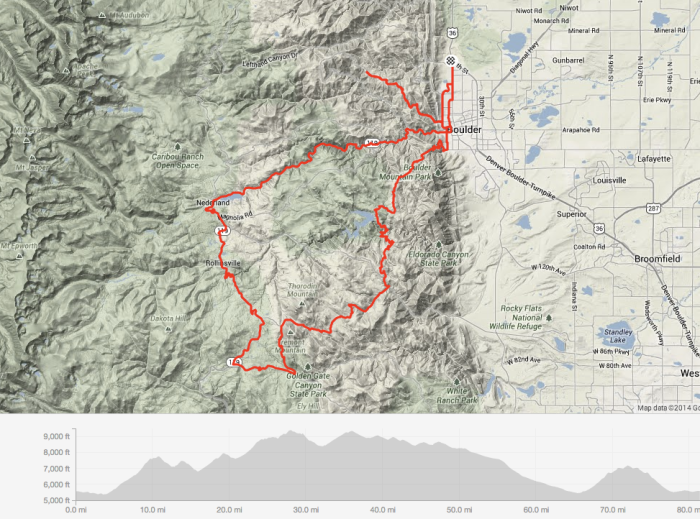 Monday. I rode “easy” with Adelaide as it was designated a rest day and I’d accumulated 26.5 hours of hard miles the previous week. But since she was doing 20 minute intervals, with me as a reversed motor pacer (sitting on her wheel yelling at her), it might have been a bit too much to consider it rest. I had to earn my burgers at the Creek Festival afterwards though. And I don’t mean earning the calories, I mean earning Adelaide’s time to come with me and get extra samples for me. There are granola bars, yogurt, sparkling juices, chocolate and other flavored “protein” milk drinks, etc, but the Morning Star stand is the best and most important sample stand to hit. And we hit it HARD. They give you 3/4ths of a burger each time you go through, and since they’re all gluten-high and Adelaide is gluten-free, I get all her burgers. We went through twice each, with me coming away with three full garden burgers. Day=success. Week=success. Life=Success. I would have opted for a third time through but we had another barbecue to attend later that evening and I’m trying to drop 1 or 40 kilos.

Tuesday. More VO2 intervals with climbing afterwards. Travis took off for home, dreaming of moving to Boulder and living the good life for the rest of his days like the rest of us here.

Wednesday. I finally cracked. I set off to do 6×1 minute intervals but ended up cruising around town at 100 watts instead. It was warm and sunny and felt like summer. I’m still jobless so appreciating “nothing” days is high up on my priorities. Adelaide and I met up that afternoon to cruise around town on the bikes, stroll through the farmers market, and read on a bench in the sun.

Thursday. I resisted the Siren of Jackson, who’d tempted me in riding BIG instead of resting like I was supposed to. I stifled the urge and told Jackson to shove his luring songs of big rides where the sun don’t shine. I needed recovery! Instead, I rode with Rhae and sat on while she did intervals. I seem to be doing a lot of “resting” while sitting on the wheels of people doing intervals. I believe this gives me the fruits of their labor without the unpleasant damage to my own legs.

That finally brings us to today. More VO2. Gotta get up to speed again for the crits this weekend. More accurately, ‘gotta get worn down and tired for the crits this weekend.’ I kid. I’ve got bigger fish to fry. This time for real. I’m heading to North Star, formerly Nature Valley Grand Prix, with Horizon in two weeks. I have very high hopes. And I do believe the shit we’ll kick out of the other bike racers will be stained with blood and drenched in their tears. Too much? Never.

2 thoughts on “Just got in shape”