Pooping, blogging, training…they all require it. You need consistent stress on your bike cycling-system in order to see large-scale gains. But you also need consistent rest periods too. Duh. This is why I took a big ‘ol, fat ‘ol rest week last week so that I could rebuild my war-torn body, only to tear it down once again this week. I’m no dumby; if you miss a rest week, I know  you’re bound to pay for it later, most likely with getting the sickness. I hate getting sick. I mean I really hate it, way more than ANY of you could possibly imagine. You think you hate getting sick? Ha. I laugh at that. I scoff, even. Compared to me, you LOVE getting sick. That’s how much I hate it. I live my life in fear of it. I literally have nightmares about getting a sore throat, wake up in the middle of the night in a cold sweat with a pounding heart, only to breath a very relieved sigh of relief when I realize it was just a dream. Then I drift back to my normal peaceful sleep and dream about cutting people.

This is why I decided to rest, because I’m a true-to-virus, cold-fearing red-blooded American.

It makes sense then that I got sick anyways, right after my rest week was over. Anyways, I won’t let it get me down. Actually I will. I’m in a serious state of depression already and it’s only been two days. But I won’t admit it to myself and I’ll keep a good face about it, for I vow to be healthy enough to crush my first race of the year this Saturday: the Gateway Group Ride! And listen up Boulder Cyclists–it better have more than 15 people because it’s going to be sunny, it’s going to be nice, and we’re all going to have a nice time cold-damnit!

In the mean time, here’s something cool that I did recently that doesn’t involve bikes: I went XC skiing. Now I don’t pretend to know what the X and the C stand for, though I do have my theories (Xylophone Custard), but I can tell you this much: XC skiing is indeed fun and it’s much easier than skate skiing. Adelaide, Adrian, and I rented skis on Sunday and spent the day exploring the trails across the street. We live at the very tip of North Boulder (NoBo, as us locals call it), which means that we have miles and miles of Open Space trails right across from us not 50 meters away. It’s a good place to live. 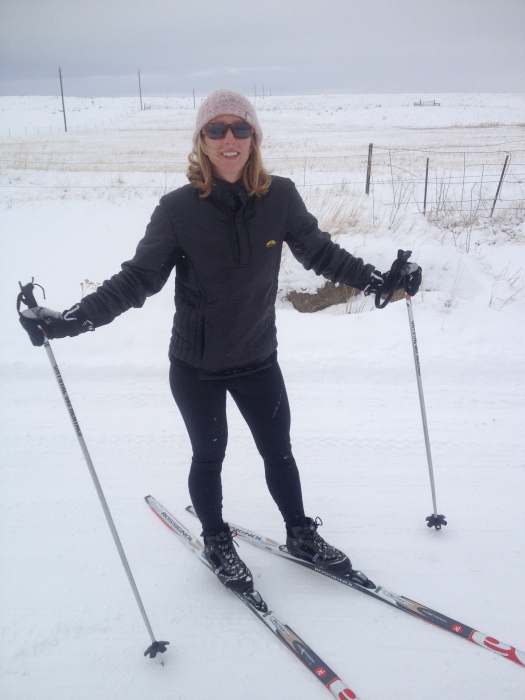 I called Steven that evening and told him I was planning on skiing in to work in the morning, which is something we’d been planning/dreaming of doing all winter long for like two weeks at that point. He arrived the next morning at 6:50AM. It was still dark, 2 degrees outside, and my mind was still in bed. I fixed up some home-brewed mochas for instant motivation and we were out the door as the sun rose.

This is such an awesome picture I think I’ll use it as my new blog banner.

The commute involved a few snow-covered dirt roads, like the one above, and a bit of walking for the last mile when we got into civilization and the bustling city of Gunbarrell where the office is, but for the most part we were tucked into the rolling hills, enjoying silent singletrack all to ourselves.

It was 7 miles out and 7 back, which took a little over an hour and a half (moving time) each way. We both brought our Garmins because Strava or it didn’t happen.

We got back home to my apartment in the dark at 6 and ended the day as it started, with hot chocolates. It was a top endeavor with a fine fit and feel, something I look forward to doing the next time it snows one or more feets, which will probably be perfectly synched with when I get over this cold and want to start training hard again. Stupid weather. Stupid cold viruses. Stupid everything.

One thought on “Consistency”