A long drive awaits our team tomorrow morning. Across the Rocky Mountains and the northwest corner of the Southwest lies our destination. Redlands is the land of orange groves, months of uninterrupted sun, and broken dreams. The broken dream part comes with the bike race. Because it’s one of the first big races here in the States, like San Dimas, everyone has been dreaming about it for months and months over the winter, secretly fantasizing about slipping away into a breakaway and claiming the climber’s jersey for a day. Maybe the dreams grow even loftier and you somehow realize you can climb really well and also sprint well and you win a stage. Hell, maybe you magically find your time trial legs and, in your dreams, you find yourself standing on one of the overall podium steps. If the winter training ride is long enough, that fantasy might turn completely wild and you begin winning the GC and stages of every NRC race, get picked up by Garmin after winning a stage at Tour of California and the national championships, go over to Europe and begin winning the Monuments within a year or two. You carry on your cycling career with huge success for 15 years, all the while writing hilarious memoires and meaningful, societal-changing works of fiction under a crafty pen name. Since you had time to go back to school and earn PHds in engineering, physics, and math, during your pro cycling career, you put your genius to work and invent a plethora of green technology. You start up a dozen companies and begin growing wind and solar technology, outpacing climate-altering energy sources once and for all. You use the proceeds to buy millions of acres of BLM land and transform it into mountain biking and hiking trails, build wilderness lodges deep in the woods and stock them full of food and supplies for gypsy hikers to live on, you construct thousands of miles of paved, car-less roads for cyclists, and close off the rest of the land just for Nature.  Your novels, the words now empowered by fame and fortune, start a revolution that overthrows Capitalism and brings peace to the world by creating actual equality. Everyone lives in simple mud huts and subsides in small communities, farming small plots, grinding grain with a shared donkey, and hunting from the re-grown wilderness. The global population falls to a healthy 10 or 20 million people and the world is finally rid of human-made problems.

Then, as if from nowhere, a solar flare suddenly destroys all life on earth in a split second. Shit. That last little bump in the grand plan was you just getting dropped at Redlands.

Because there’s so much time spent glorifying and dreaming about certain beginning-of-the-season races while you slog out five and six hour days during the winter, it can be hard coming to terms with reality. Reality says that you’ll be dropped, finish mid-pack, get sick, crash out in the first 20 minutes, forget how to put your shoes on and miss the start. Wait, that last one is just a re-occurring nightmare.

To be a successful cyclist, and by successful I mean not quitting before your time is up, you have to continue living in the fantasy world even though, deep down, you know there isn’t the slightest chance you’ll ever win or podium during a stage of Redlands. This is where I currently stand: believing yet not believing. It’s a strange place to be. Even now as I type this I don’t truly believe a win or a top three is out of the question. Irrationality is a wonderful tool; blind religious faith will save me.

I got home last Monday from San Dimas, unable to bask in the warm sun in California with most of the rest of the NRC peloton as they trained and rested in preparation of Redlands. I got off two buses and drug my bike bag and gear to work at noon, and stayed late until Adelaide picked me up. The next morning I did a motorpace session with Garrett (the driver) and my teammate Nick. It was cold when we started but both of us warmed up right away once the hard effort started. My legs were totally ruined from San Dimas and the prior day’s travel, but even so I felt like we were going too slow, so I began attacking the scooter. With twenty minutes to go on the way back into town, Garrett began ramping the pace up. I kept yelling at Nick to tell Garrett to go faster and faster–all the while the fire grew in my trembling legs. All of a sudden I realized how screwed I was. I lasted until five minutes to go and got popped. I was trashed, and wondered why I even thought this was a good idea at all today. I rode slowly in to work.

I did a couple hours easy on Wednesday, now having isolated myself from the rest of the office by working on the computer desk in the kitchen. There was a cold going around and I didn’t/couldn’t bring myself to comply with normal social manners and be in the same room anymore. That night we had a team dinner at Rio for Scott’s birthday (Kim and Jake’s cakes were present). Showing great self-control, I took home almost my entire burrito for lunch the next day. Now THAT is dedication to a diet. I only ate like 1,700 calories of chips and salsa too.

Thursday was another hard day. A very hard day. I did my favorite workout: 8X4″ VO2 with equal rest. Despite my legs still being tired from only two sort of rest days since the race last weekend, I was able to pump out some good power. I cracked on the sixth and seventh intervals, but did a big effort on the last one to bring the average back up. I finished off the ride with three all out sprints up some rollers. That night I rode down, fast, to Adelaide’s house from work, late as usual.  She, Eric, and I went to a Lindsey Stirling concert in Denver. Lindsey Stirling plays electric violin dubstep while performing modern, ballet-esque dance. It was pretty sweet. Check it:

Friday was two and a half hours easy with a long climb. Saturday….Saturday was the blowout day and MAN did I blow it out! I started off the day right, with a large Freezie: oats, yogurt, banana, peanut butter, coconut milk, and cinnamon stirred together and left overnight in the fridge to solidify and “freeze.” I washed that down with two mugs of coffee and was out the door for the Gateway ride, still tired and with aching muscles from everything I’d done the past week and a half. The tiredness would fade. It always does with enough riding.

The Gateway ride was small. Super small. But we had a good pace-line out to the Carter Lake climb turnoff. From there I smashed things apart pretty well and everyone got to enjoy varying levels of pain on their own. We rode back to town two-up; I felt pretty good and fresh by the end, and had a short rest at home, ate some food, and cleaned my bike before the second ride of the day.

There was a fast local crit down in Boulder that afternoon, which was the reason the Gateway ride was so small. I rode down there and met my team before the start. Our goal was to attack a lot and get in some good training, and if a result came out of that then cool. Of course results never come that way– treating races like training. And they especially don’t come after training hard before the race like Nick and I had done. I should mention that Colt did win the Collegiate race earlier in the day, getting the first Rio victory of 2013.

I attacked out what little brains I had left, putting digs in all the way till the end of the blustery course. I really suffered with ten laps to go after initiating a three-man breakaway. I even had to skip pulls, feeling like I was obliged to tell the other two guys that I wasn’t being lazy or trying to screw them over, but that I was already 110 miles deep and my legs were more than leaden. I didn’t say anything though, just in case they realized that if they stood up to sprint for 10 seconds I’d be dropped in an instant. 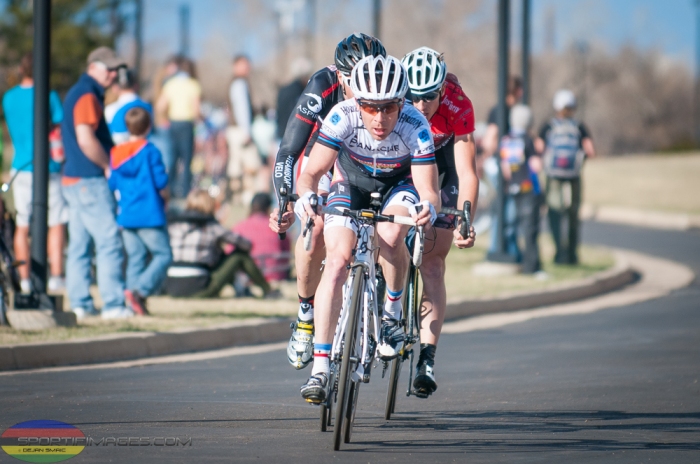 Weak little Kennitto hiding from the wind, still doing 450 watts for some damn reason. Photo by sportifimages.com, from 303 Cycling.

We were caught anyways; the pack won the race. No wait, there was a two-man breakaway that no one knew about that almost lapped us. They won.

After the race (no the mayhem wasn’t over for the day) I rode up Super Flagstaff with Liam. My legs still felt good but about a quarter of the way up I realized I was on the verge of bonking. Plus it was getting really cold. I decided to get dropped and let Liam go on on his own while I just rode up slowly by myself. I got colder and more bonky as I went, really wishing I’d fueled better or that I’d spot a fallen Cliff Block on the pavement. Normally I can get by on one or two thousand calories on even really hard six-hour rides, but with all the sprinting and hard efforts, and the six hours of riding being strung out over the span of most of the daylight hours, I was clean out of glycogen. I turned around and rode down, getting colder and colder. I got to the bottom and turned back up to climb more and meet Liam on his way down (my race wheels and bag were at his house where I’d dropped them off, so I couldn’t just ride home by myself). My eyes started crossing and my vision blurred. My head hung low, mouth slightly gapping open. I began shivering as the sun slowly set. Finally I saw Liam and we rode down again.

Heading through town to his house, still shivering and cross-eyed from hunger and the cold, I challenged Liam to race up a small hill and thoroughly crushed him. Even in the depths of despair, one must put forth challenges, because in most circumstances things are worse off for someone else.

We got to his house, I wrapped myself in a blanket and did a quick raid of his food cabinets for hot chocolate and peanut butter while he showered. After warming up a bit we drove to Chipotle for victory burritos (victory for crushing ourselves) and he dropped me off at home, where I ate more food.

Now I rest, sit in a van, rest, and prepare myself for failure at Redlands. I mean victory. Either way I know I couldn’t legally or sanely do much more to be stronger than I am right now. Given my work time-constraints, I’m super happy with what I’ve been able to accomplish this winter and spring. I’m stronger than I’ve been in the past even with less recovery time. My training is a bit more focused and sharper for sure, but I think the main thing is that I’m just more happy this year–with how everything in life is going.