It’s that time of year again.  Time to pack up my entire life and head out on the road for the next three months.  Time passes quickly, at times.  It seems like only eight and a half months ago that I drug my cardboard bike box and Black Diamond duffle bag, which was loaded full of heavy things like bars of soap and canned soup, from the Denver International Airport to the bus stop heading to Boulder.  My arms were dead tired already, but the dragging of equipment continued as I went from the bus stop to the taxi.  And from the taxi to a dark, empty apartment where I’d be staying for the next two weeks.  I didn’t know a soul in Boulder when I arrived.  A lie.  I guess I knew two people.  But I’m pretty sure they’re atheists so they don’t have souls anyways.

A few days ago I had to pack up everything I owned and move it to Kim’s and my new apartment, which is extremely far north of Boulder, by like three miles and is going to be a pain in the ass to ride to my favorite grocery store of all time, Sunflower Farmer’s Market.  Packing didn’t take me long, since most of it fit in the same Black Diamond duffle bag and bike box.  The rest I left back in Boulder, mainly being clothes that I don’t wear very often and extra boxes of dental floss and bars of soap that I never used.  Early Sunday morning I gazed upon the mountains one last time as I said my goodbyes to the dry desert mountains of the Front Range as the bus took me back to the Denver airport, for like the seventh time this year.  Whatever carbon offset I have by living a car-less, low-plastic lifestyle, I destroy with all the damn miles I fly.

My head nodded to and fro in the aisle seat, jarring wildly like a Lang Reynolds Bobblehead dashboard action figure, whose only action is having an extremely large, bobbling head.  My sleep the night before had been ragged and restless, hence my drowsiness on the plane ride; I’d been anxious and excited about the upcoming trip, like usual, and I had to get up at the wee early morning hour of 5:05, six hours earlier than I like.  Luckily my smart brain woke me up for 30 seconds mid-flight, just in time to get some peanuts from the flight attendant before passing out again.

After the plane ride I spent the day and night in Sherwood, OR, before the team van picked me up on our voyage to Bend for Cascade the next day.  I was treated to an amazing homecoming, getting to partake in my mom’s photography club BBQ and going on a scavenging hunt with my parents and Thomas T Tabernackle.  Thomas’ highlights of the day involved being fed many pieces of a hot dog under the table, jumping over a fence, digging for gophers, and almost knocking over a small child that got in his way.

The next day, Monday, involved more travel.  My legs were feeling good on the morning ride I did.  The team rode together on the prologue course that evening when we got into town.  Having a prologue AND a time trial in six-day race is………an extremely smart idea!  Who wants to do dumb road races anyways???  Not us Americans, that’s who!

The course was 2.8 miles long, starting on a downhill (re-occurring theme here at the CCC) and ending on a series of short climbs.  It was a super fast, exciting, painful time.  Super cool course.  I had to brake, and nearly crashed, on the one and only corner you needed to pay attention in, but only lost like 50-70 seconds.  So no biggie.  I would have won if this hadn’t happened of course, but whatever.  I placed 69th instead, borrowing Jesse’s TT bike since mine hadn’t shown up yet from FedExceptionaly slow.  Jesse was our best finisher, five seconds faster than me for 47th place.

With the time gaps pretty dang substantial already from the previous day’s prologue, the GC battle had basically already been wrapped up, nullifying the last five days of the race.  Everyone went into the strictly ceremonial stage #1 without any pressure (very similar to the last stage of the Tour day France).  The next five days would basically just be one large parade lap around the mountains of the Central Cascades.

Starting at the top of a very long, fast descent on a highway, we were all 100% CONFIDENT that there would be no high-speed crashes in the opening 26 miles of downhill like there had been last year.  I mean, everyone would be paying extra attention and be extra super careful this year right?  The promoters must have thought so, since the course was exactly the same as last year after 50 guys went down at close to 50mph.

Approximately 13 miles in, a small pile-up of 30-40 guys went down in front of me.  I braked hard and missed it, along with the rest of our team—save for Colin, who ended up with a deep chain ring wound on his calf and a banged-up arm and hip.  He made it back into the bunch before the 20-mile climb started and the real pain began.

The approach to the climb was a long, winding false flat drag that meandered through the tall green pines of the McKenzie National forest—breathtaking both literally and figuratively (HA…HA.  See what I did there? Exactly the same thing Paul Sherwen and Phill Liggit do every single time there’s a climb in the Tour).  Anywho, the lead up to the base of the steep part was tense and edgy, with everyone fighting for position before the climb pitched up.  I eventually found Gabe and Colin and sat behind them on the outside strip of the road, bumping bars and shoulders every once in a while with riders to the left of me who wanted my spot behind Colin’s sweet, sweet ass.

I attacked Gabe and Colin as soon as I had the chance and moved up three spots.  Excellent.  We were still jam-packed on the small road with no where to go but forward, though in the peloton you often forget you’re even moving even forward, since your main frame of reference–the other riders–stays stationary.

Once the road got steep, the pack thinned and stretched out quite a bit.  Gabe and I could see Jon up in the top 20 for the entire steep part of the climb, while we sat a further 30 guys back.  The hard part of the climb lasted about 20 minutes.  I was in some pretty uncomfortable pain during the first five of it, then recovered well and was only suffering a medium amount for the rest of it.  As riders dropped off the back and the sound of heavy breathing increased, so too did the thick white fog as we made our way up into the clouds.  Steam came from our mouths and backs, which were already soaked in sweat.  We all removed our glasses to see in the rain forest.

The top part of the mountain is rolling but fairly flat with a few descents to break up the pain in the legs.  The clouds broke and sunlight shown down on us.  The red lava flow on either side of the road went mainly unseen by us as we focused on maintaining position and re-fueling after the climb.  We’d started with 190 riders and were down to a little over 100 after it, which was larger than in years past—or so I’m told.  I’d never made it over McKenzie Pass before with the main group.

My Wise Guru Coach Sam Janson was up the road since the opening miles of the race, and was still away collecting the KOM jersey and throwing his breakaway friends to the wayside, much like the eagle in the video.  The peloton sprinted for the scraps of 4th and 5th place.

We descended, we sprinted for the scraps of the Sprint points (I didn’t), more guys crashed into the side of a car (a lot of our crashes happen when the road gets ‘pinched’ due to cars and trucks pulled off to the left of us), and then all of a sudden I realized there were only 10 miles of racing left since today was such a short race.  We took a series of turns through the town of Sisters.  Gabe and I found Jon and rode together to get to and try to stay near the front.  It lasted a little while.  The pace was pretty hard, heading up a false flat on a rough road with the wind seeming to come from both sides.  Maybe there was a tail wind or something.  Anyways, we lost our good positioning but made it to the base of the second and last climb in good enough position to hammer it up the first steep pitch and stick in the main group for the next couple miles of flat plateau before the climb got steep again for the final 5K.

I got popped from the group with a little under 4K to go, then popped again from the small group of six or seven I was with at about 3K to go.  One final group came up on me in the final five or six minutes of the race and I finished 64th, two and a half minutes back from the winner, Mancebo.  Although not a great ride, it was the best I’ve done on this stage in the last three years of doing this race.  I’m looking forward to the circuit race on Sunday as it suites me well.  The crit on Saturday is another day for the Biggunses, and who knows?  Maybe Friday’s new road race course could suit a breakaway better than the previous parcours.

When we all finished and rolled to the van and car in the parking lot at the top of the Three Creeks Sno Park, our mechanic, Doug, and manager, Alan, had plenty of rice n’ black bean mixture for us (with a fresh pot of sAlsa too) and PB&J sandwhhhiches, that Winger had made.  I quickly ate all my food plus 13 Snickers bars to replenish the calories I lost in the three hours of racing we’d done, Colin helped himself to an extra five or eleven bowls of rice to help re-grow the skin he’d lost in the crash (Spencer Logic), Ian didn’t eat anything or drink any water so he’d be light for the next day’s flat time trial, Jon also didn’t eat anything because he had weighed so much today that it caused his seat post to slip down on the final climb, Gabe applied his country folk knowledge to the construction of a snare, which caught him a snow shoe rabbit that he cooked on a spit, Jesse tackled a moose by the side of the road and ripped into its jugular with his Canadian teeth while singing Oh Canada!, and Winger captured all of this on his camera for the next installation of The HB Show I mean Instagram.

Tomorrow is another cursed time trial, this time much, much longer.  Maybe I go fast for it?  I won’t have Jesse’s bike though.  We ate burritos after the race at Long Board Louis’.  This is number 91 for me.  They had a salsa bar and FREE guac!

My room came equipped with a mini kitchen.  I whipped up that sandwich there in no time. 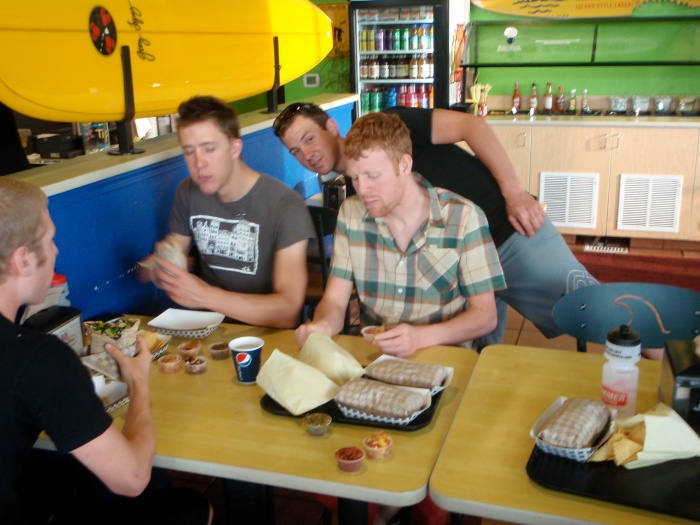 “Gabe I swear to God if you eat even a scrap of my burrito I’ll murder your family in their sleep!”