I looked up from the melting pavement as I rode from the post office to Suflower Farmer’s Market, my favorite grocery store of all time.  What I saw made me do a double take.  A huge plume of smoke was spreading into South Boulder, just a mile away, like fallout from a nuclear bomb.  The air was thick with nasty, brown smoke blowing quickly east due to heavy winds coming off the mountains in the west.  The sky was buzzing with helicopters and jets dropping red fire-retardant chemicals.  Shit.

Just an hour earlier, while coming back from my bike ride, I’d been hit by a few big drops of rain as a quick thunderstorm passed overhead.  I saw about a dozen lightning strikes nail the ground.  I thought nothing of it at the time; my mind was set on a cold frozen yougurt from Boom, where my roommate Kim works.  I finished my yogurt, rode home, packed up a half dozen items to ship to various people across the world who, for some reason, decided to buy a bunch of old ratty bike stuff on ebay.  I packed my backpack to the brim with bungie cords strapping large boxes on in every direction.  After annoying everyone at the post office by filling out the addresses at the front counter instead of earlier back in line, I got back on my bike and headed to the grocery store.  How many gallons of gas will it take to ship my crap to New York?  That’s literally what I was thinking about when I saw the fire on the hillside above Boulder.  It had reached 300 acres in an hour and a half.  The wind was violently swirling the out-of-control fire into massive swirling flame tornados, starting new spot fires a quarter of a mile beyond the rim of the original flame.  Houses were already being evacuated and it looked like another Waldo Fire, the one Colorado Springs is currently enjoying where the fire is presently spreading into the city.  32,000 people have been evacuated from Colorado Springs, which is just to our south, and it’s burning an area well over 6,000 acres.  It started just a few days ago.  Up north, Fort Collins has been ablaze for weeks, still only at 60% containment.  The flames are closing in from every direction.

As the brown smoke billowed off the mountain into downtown, I continued riding along in awe.  It was another scorcher today.  100 degrees, even higher on the radiating pavement under my wheels.  It’s been in the 100’s for weeks here in Boulder, with the only rain coming in the form of brief thunderstorms that only start more fires.  I parked my bike in a corner of the grocery store and went about my business, loading up on a week’s supply of fruit and veggies.  Inside the air-conditioned super market, the feeling of calm was enhanced with soft, pleasant music, played to enhance the mood for purchasing.  The capitalistic mantra of our nation: when fear looms in the air, spend more money.  Outside the world was a flame.  Inside, we were distracted by the great sale on cherries from Argentina.

With Colorado’s record cold and snow fall in the winter and now record heat, drought, and fires, it’s hard to ignore the presence of climate change.  And yet we’re doing a fine job of it.  I stuffed my backpacking to the brim with food, strapping on bananas and a carton of eggs to the outside because.  Like usual, I bought too much to fit inside.  There was one other bike parked in the store (Sunflower is awesome about letting the expensive bikes sit inside) and there was one bike outside in the bike rack.  Adversely, the parking lot was full.  Typical.  Even here in Boulder where people pride themselves on being green and conscientious of their waste, we still fall way behind the rest of the world.  We pack our SUVs full of plastic bags and packaging, processed food, and hamburger patties that require 60 calories of fossil fuel to create one calorie of actual meat.  The SUVs are driven one to three miles home, where they sit in gigantic garages big enough to house entire extended family in India.  It’s always rush hour traffic in Boulder.  I saw thousands of cars on my short ride home from the store.  I saw only five human beings.  Once home, our groceries occupy a fridge 200% larger than those in Europe, within air-conditioned houses packed, like my backpack, to the brim with plastic and other non-biodegradable crap that will end up in a land fill within seven years.  Just outside there’s a massive fire burning down what’s left of nature.  As long as it stays up there in the hills…who cares?  The deer maybe.  But the fire is no longer on the horizon, it’s here in front of us, knocking on our doors and still we sit inside and ignore it.  The nocking grows louder, so we turn up the volume on Fox News.

While my house isn’t air-conditioned, I don’t use any plastic bags, and I ride a bike around, I did just fly across the country a few days ago, emitting carbon high into the atmosphere where it’s twice as detrimental.  I bought bananas from Panama.  I shipped an old skin suit to Canada.  The problem is, even those of us who care, don’t really care.  Maybe we’ll take notice when we finally catch fire.  Until then…it’s business as usual. 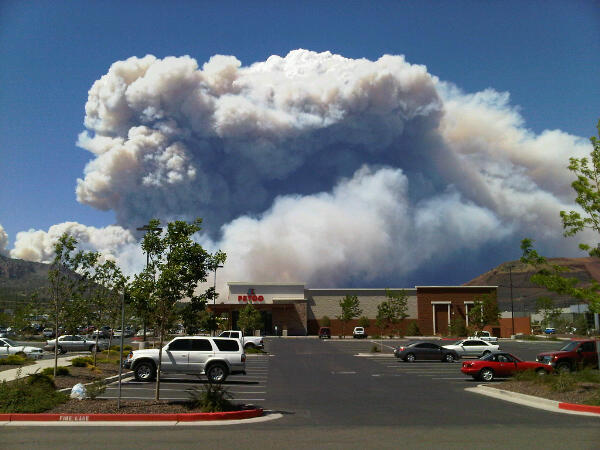 2 thoughts on “The world is on fire. Let’s get some marshmallows.”