First off, I’d like to acknowledge how happy I am that I’m not up in Seattle or Portland right now, because that weather must suck!  I just looked at the forecast to feel good of myself and it’s pure rain for as far as the eyes can see!  YES!!  I, on the other hand, am currently enjoying an early summer here in Boulder, with mid 70’s and plenty of sun.  For everyone training in the Northwest, I pity your decision to live in the Northwest.

On the third hand, there’s basically no racing here in Colorado compared to what there is in Oregon and Washington.  What few local races there are are few and far between.  I was planning on doing a crit just a few miles away this evening but my legs are way too tired from doing 2-3 hour easy rides the past couple days.  I’m just now getting over my cold, and yesterday was my first decent ride in quite some time.  Man does it feel good to be healthy and riding up hills again.

Redlands did not go okay.  It went extremely, enormously, ridiculously terrible.  I never got over the cold I had during San Dimas and couldn’t even finish one lap with the peloton during the second stage, the Beaumont road race.  The day before, I’d suffered more than I ever have during a time trial, coming in a crappy 111th.  I blew up on the climb, my lungs functioning at half capacity.  It took me five or six minutes after the finish line to get clipped back into my pedals and coast downhill, where I was still out of breath and throwing up.  Luckily it tasted sweet from lemon-lime Heed.  When you’re looking for the optimal vomit taste, always choose Hammer Nutrition products such as Heed and Recoverite.  Nothing else compares with Hammer’s patented “No-Bile-for-awhile” secret formula.  Truly, this vomit tasted just as good as the original product.  And I’m not even being sarcastic or anything, I really do like Heed and somehow the vomit really did taste good.  There are soooo many ways to enjoy Heed, Perpetuem, and other Hammer powders.  Joe prefers, “a quad scoop with a little water on top.  Just a little.”  Wise Guru coach Sam Jansin  likes to make his into pancakes.  John Hornbeck likes his mixed in with a hint of bro-melain (like from a Brocal pineapple since pineapples have bromelain–which is a mix of protein digesting enzymes that can be used to treat sore muscles and inflammation.  I felt like I had to explain this joke since probably no one knows what bromelain is.  Now it’s ruined.  Damn you and your fruit ignorance).

After I licked my lips clean of my delicious barf, I continued the 975 minute coast downhill back to the parking lot.  It only  takes 9-12 minutes to get up the hill, yet somehow it takes an hour or three to get back down.  My cough worsened throughout the day and into the night.  It was my second day on antibiotics, but whatever good they were doing me was thwarted by the effort of the prologue and I was completely useless in the road race the next day.

Two thirds of the way through the first lap of the five-lap race, as we fought for position coming into the KOM climb, I was actually in a really good spot near the front, so I decided to attack.  It was actually a bridge up to two riders who were just off the front by a hundred meters or so, and since the pack had momentarily sat up, I thought it was a good time to go.  Once I was off the front I immediately regretted the decision.  In fact I think I remember regretting it even before I got away, like maybe even right after I took my first hard pedal stroke.  I caught them and tried to regain my breath, since the hill was only a kilometer up the road now, but I wouldn’t regain it for another twenty five minutes, until I was seated in the parking lot next to the van, wondering why I had to get sick AGAIN right before SD and Redlands just like last year.

But the good thing about bike racing, as opposed to Triathlon or Baseball where you only have a few races/games a year, is that there’s always tomorrow, or next week, or next month.  With so many race days, getting sick for some of them is acceptable, though also unavoidable.

In terms of how the race went for the rest of the team:

Dan went home before it stated since he got sick during San Dimas.  Colin took his place but also got sick and didn’t finish the second stage so moped around with me for the rest of the weekend making singing cat jokes.  Jesse got sick at SD too and didn’t start so Steve took his place.  Steve, looking forward to a nice relaxing week of hard training at Agoura Hills during his spring break, was rudely yanked from his pool-house dream resort and its beautiful view of the coastal mountains beyond the edgeless pool at the Grosswendt’s house (the official housing sponsor of The Joe Holmes).

Danny and Ian sharing an intimate moment at the Grosswendt house.  We like to keep things bromantical here at HB.

Steve ended up having a great final day on the hardest course of the race–the Sunset loop– and hung with the leaders for most of the 12 laps until it finally blew to smithereens in a heavy, cold downpour.  He finished 61st overall.  Gabe, who got sick at San Dimas had an amazing recovery and got stronger with each stage, finishing 82nd overall.  Jon, racing his first NRC, had a terrific ride coming in 53rd overall.  Ian, David, and Danny are all part of the Tucson crit crew (so is Steve) and therefore likely believe they’re too ‘cool’ to be mentioned in my blog.  (Sidenote: I had a dream last night that I had a white G-Shock wrist watch–the kind that the crit crew have–and I was super excited about it until I realized it was a cheap fake version).  Okay I guess I’ll mention them, now that I’ve already mentioned them.  Danny had a great first two stages, finishing 59 the first day and 20th the second day, making the front group and eventually finishing 56th overall.  David finished 81st and Ian finished somewhere around 65th, though they somehow messed up the results and have him as DNF.  I don’t think the official results have ever been wrong before.  This is a first for them.

This is the one I want, except I want the version with more gadgets. 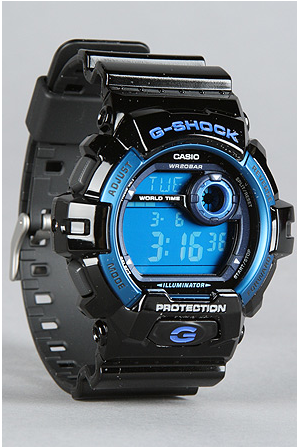 Despite half of us getting sick, the whole week of racing (San Dimas and Redlands) went very smoothly thanks to team president and sougnier Alan Schmitz, who drove the van everywhere, made food, fixed bikes, set up everything before and after the races, and generally had a great attitude the entire time, which is crucial for our mental well-being.  It was disappointing not having any particularly great result for the team to thank him with, but it will come sooner or later.

Here are some pictures from the CA trip from Winger’s Tumblr sight.  Click here to see all of them.  Winger wasn’t at Redlands so these are just from team camp and the day before San Dimas.  Basically, for me, before everything went “pear shaped” as JH would say. 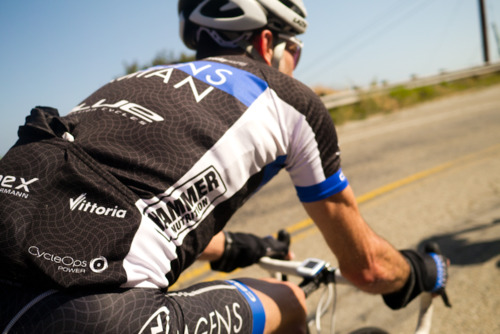 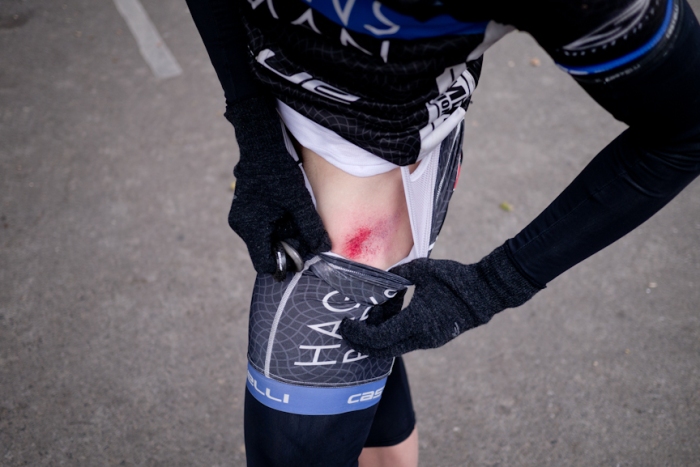 Me having less of a good time.

But a shiny new bike=best of times! 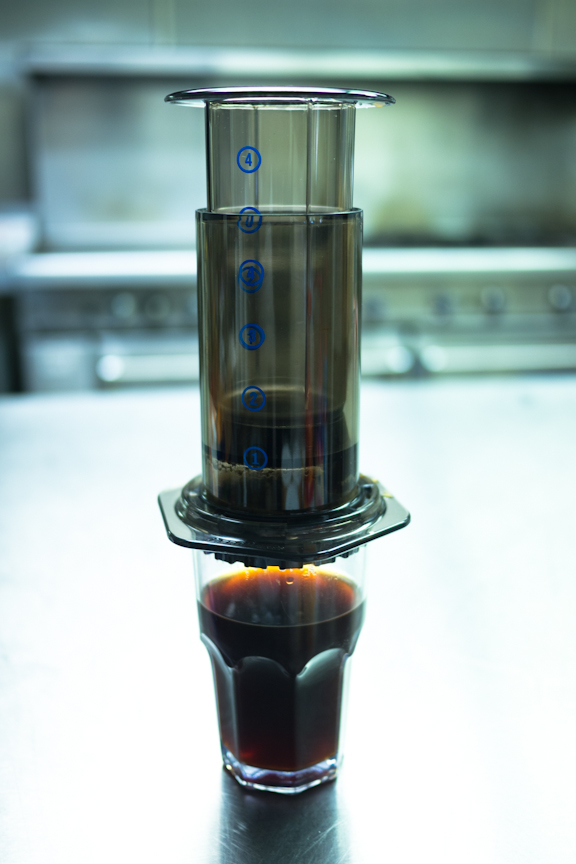 Stupid new way to make coffee that everyone’s creaming themselves over.

Gabe thinking about stuff that a Gabe would think about. No one knows what this is, but I imagine it has something to do with woodchucks.

Jesse and his good luck charm. Hey Jesse, if it’s such good luck why’d you get sick? Oh snap!!

This is moments after Jesse hurled a tennis ball at my nuts. Note Alan checking to see if the bike is okay. 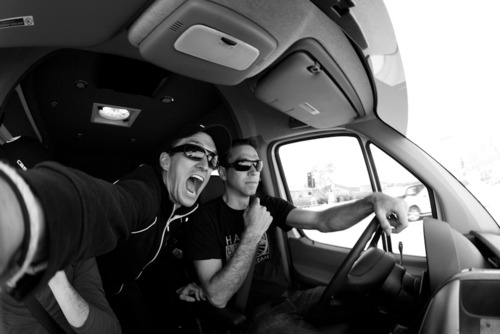 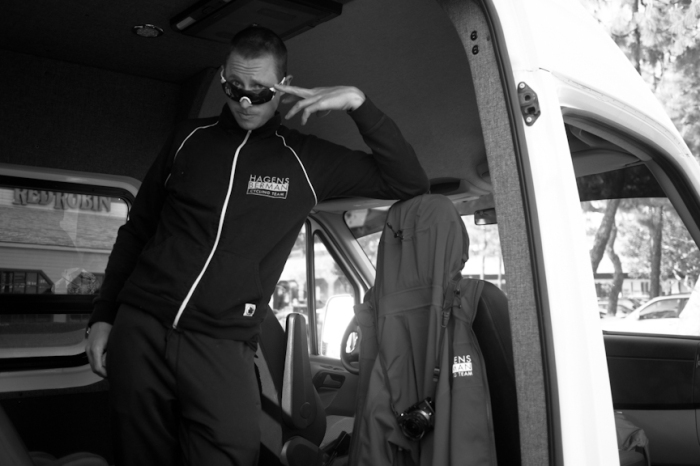 I think it was posing for this very picture that originally got me sick. One mustn’t disrespect the bike racing gods with such a show of self contentedness the eve before an uphill time trial.