It’s summer here finally. Elsewhere in the northern hemisphere, signs of winter are approaching. However, rain and cold temperatures are not on the schedule here in Belgium. After 11 ½ months of depressing, dreary clouds and suicide-inducing rainstorms, Belgium is being treated to two weeks of warm sunshine while the cornfields slowly bronze and the trees piss themselves yellow in fear of the coming darkness.

Like summer, my cold is still lingering. I believe it will linger for the rest of my life. I’ve accepted this unfortunate fact and have decided to just get on with it. I raced on Thursday in the city of Tielt. The course was a bit boring, with a lack of hills and a straight section of road that was longer than 1 kilometer (someone forgot to tell the people of Tielt that kermesses should have no less than six corners per kilometer).

I was able to attack a bit and ride near the front of the 130-man field, though I wasn’t at my best. I botched the final bunch sprint, which was the first bunch sprint I’ve seen in a kermesse, and I ended up 41st. I didn’t have anything left in me at that point though so I was satisfied with just being somewhat well enough to race. On the way home I decided to stop for a hitchhiker and pay back humanity for the the dozens of times I’ve been picked up. We delivered her to her door at her parents’ house, ending her 6-month backpack trip around Europe. We expected good karma to follow for our next race.

Jake and I took an easy ride/Colruyt day on Friday. On Colruyt’s menu: coffee, cake bread, scalloped potatoes in a ham and cheese sauce, pork, dark chocolate, milk chocolate, pea soup, grapes, oranges, and Bella cheese circles. Jake and I spent an hour and a half making the rounds before we went to the bike shop and picked up a new bottom bracket for the Flanders team bike I’ve been using over here. Despite my excitement for using something as a lugged carbon frame, I miss my Blue.

Saturday’s race took place in Hooglede. The hot weather brought somewhere between 160 and 180 riders to the race, as well as EVERY attractive girl in the country. Jake thought he might just spectate and make small talk with the ladies instead of doing the race, but then he remembered he’s afraid to talk to girls and decided to race instead. The communication that goes on between bike racers during a race is much simpler anyways. There are really only a handful of subjects we discuss, most of which requiring only minimal body language and hand signals.

So it’s not all that different than a conversation during sex. My apologies, I shouldn’t be making jokes on a sad day like this. As everyone is certainly well aware of, today bore witness to the deaths of 1,200 innocent Americans in a horrific attack by yet another terrorist group. Just when the world thought it could breath a sigh of relief now that Osama is gone, another terrorist organization seems to have taken his place. Philip Morris has released video footage triumphantly taking credit for the 1,200 American lives lost to emphysema, coronary disease, lung, mouth, throat and various other types of cancer. Nations across the globe are voicing their condolences while concerned Americans are already asking the tough questions. Could this have been avoided? Is more airport security needed? And, most importantly, in what country do we start dropping the bombs?

Back to the race in Hooglede:

For the fifth time this season, I crashed. I came away from it with nothing but a bit of road rash, despite landing hard on my right shoulder again. The good news is that my collarbone must be fully healed by now to take that sort of blow (my good karma I guess?). The bad news is that I’d been feeling somewhat strong again and I had just helped form a split of 20 riders during the hard section of the course. I was seven riders from the front when we entered a sharp right-hander that had been picking off riders all day. I took the same line at the exact same speed as the guy in front of me. I must have narrowly hit an extra thick patch of dirt (the roads are pretty dirty around farm fields these days due to the harvest). I went down hard, cracked yet another helmet, rolled off the side of the road, pulled my bike with me, and barely missed taking down the rest of the guys behind. I spent too much time getting my bike sorted out and didn’t get back on until the single-file pack had just passed me. I chased hard and almost made it to the tail end a kilometer later. Too late though, the false flat hill was over by then and it was the flat tailwind section for the next kilometer. No way I could have caught on at that point. The follow car and ambulance passed me. I changed, showered, and got a very minimal amount of help from the medic in the sports center.

Jake had been right behind me when I crashed, and later he told me that everyone in our group sat up when I went down. I never would have guessed they’d do this and it’s a nice sign of respect. They were caught by the pack shortly afterwards, the early break was eventually caught, and the entire field came into the last lap together. I watched the finish from the sidelines. The 90-man pack was torn to shreds after the final time up the “hill” during the 1K tailwind finish. Some guy had a small gap with 500 meters to go and won by a second or two. He must have picked up multiple hitchhikers after his last race.

The mustache in full healing effect: 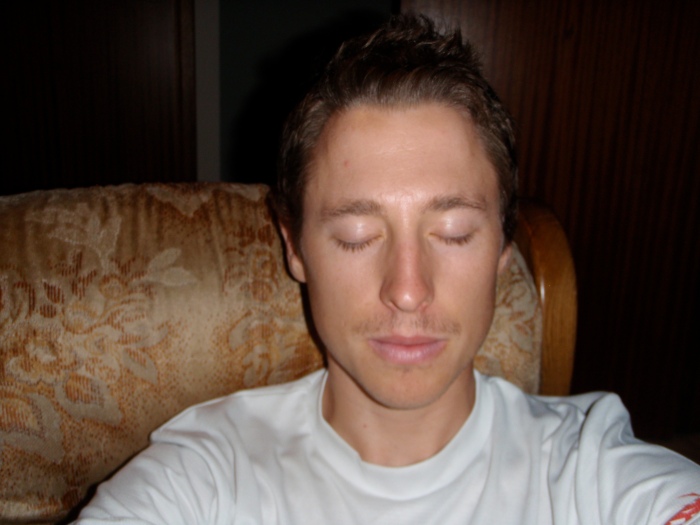 After a bike crash there’s nothing better to wake up to than a chocolate bar mysteriously placed at your doorstep. 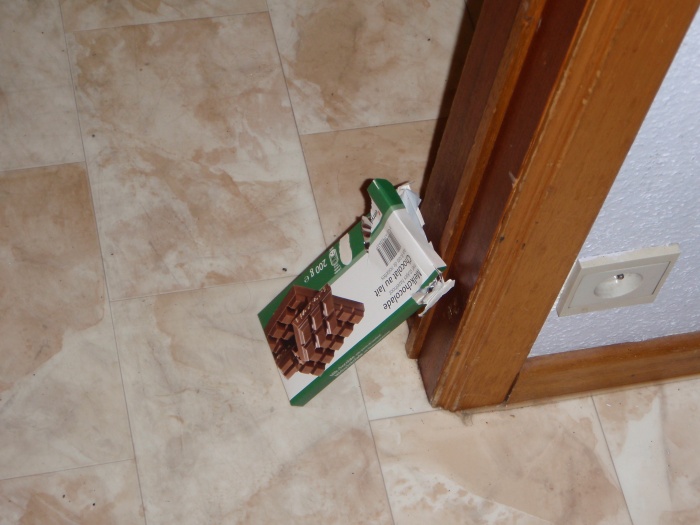