Today I raced in Lokeren, 25 miles north-east of my town, Zingem. It was hard as shit. If said shit was frozen. Because otherwise shit normally isn’t hard. Especially mine this morning.

I woke with massive diarrhea, ate breakfast and ruined the toilet again about 45 minutes later. I’ve been eating a ton of these fruit-flavored dissolvable magnesium tablets because Justin told me magnesium was an important mineral for going fast and since he speaks with a British accent he has a lot of clout. They sell the magnesium here at the supermarket for 1 euro for a Nuun-like container of 20 magnesium tabs, so of course I’ve been downing them like candy. Turns out this kind of candy (magnesium) gives you the shits. Another symptom of magnesium overload is a feeling of weakness and tiredness, which explains why I was so tired last night after only riding 2 hours. I wasn’t tired when I woke up this morning though, until I read on the Google about the magnesium OD symptoms. Then I got real tired.

So with the power of suggestion I suddenly became drowsy and lethargic 30 minutes before I left for the race. Not to worry, where one drug fails you, another shall take its place. A few sips of coffee and I was good to go (though later I was told it was decaf coffee, which further proves how potent the power of suggestion on the mind really is). No just joking it was regular coffee, but that would have made for a good story though.

I was a bit worried this wasn’t the best way to start my first race over here (still coughing and now consistently shitting every 45 minutes) but I felt great on the ride out to the race and it ended up not affecting me at all. I’ve had plenty of rest and my legs were good today, so that was an accomplishment for the day right there in itself.

Geoff, who hasn’t been able to get his racing license from NZ yet, decided to roll to the race with me for his afternoon workout. It had been raining in the morning, but things were clearing up and it was warm and humid and overcast. Perfect racing conditions.

I got us pretty lost about 20K from home when we got to the large city of Gent. Long story short, after asking a bunch of people how to get to Lokeren and not getting sufficient answers, I said goodbye to Geoff and went off on my own. It was getting too close to the start of the race and there were still 20K to go to get there. My cortisol levels surpassed the psi of my tires at 120, and my easy spin to the race became a mad dash through the busiest intersections of Gent, buzzing through red lights, drafting off buses, dodging cars and pedestrians and cyclists and train rails, hopping off the curb, back up, flying through roundabouts. It was a good warmup for the race actually. Somehow I got through Gent and found the correct road to Lokeren. I think I used up almost all my good luck for the day right there by A) not getting killed in traffic and B) making it to the race on time.

The race was only 114km and would take 2:40 minutes or so. It was a pan flat 13 laps on an 8.8km course with plenty of turns, brick pavers, wind, potholes, narrow roads, and three cobbled sections–one about 400 meters long and the other longer one about 800 meters.

There were 100 starters and would only be 49 finishers, which is actually quite a few for a hard kermess. I started mid pack and picked my way forward until I was sitting in the top 15 about half a lap into the race. As I took off past the front on an attack I heard a crash behind me right after we rounded a corner. Perfect! I didn’t look back and drilled it for about a half kilometer by myself. I looked back eventually and saw a few guys dangling off the front of the peloton in persuit. Two of them got onto my wheel as we got to the long cobbled section and I drilled it for an entire K by myself, feeling pretty good I guess. The effort took it out of me though. After the two of them pulled through ONCE, they yelled at me to take my pull. WTF!! You’ve got to be kidding me! We came through the finish line and I sat on for a few minutes to rest. Two more guys bridged to us. It was hard for the next three laps or so and finally we were away, the pack out of sight after some slight reshuffling of the break with six of us away for what looked to be the winning move.

I didn’t realize it, but every lap, or maybe it was every other lap, (for at least the first half the race) was a prime lap and the break was always splintered here during the 1K cobbled finish stretch–ruining the cohesion of the break for probably only 20 euros a prime. I didn’t know why it was happening and then when I figured it out I never knew which lap it was going to be on, otherwise of course I would have gone for it too.

Also, to make our break have even less chance of success, guys would skip pulls, rest for a minute, then come to the front and DESTROY for 30 seconds straight, gaping everyone off and dropping the guy who had taken the previous pull. We all yelled at each other quite a bit and I was pretty confused as to why we couldn’t just roll through in cooperation like a normal, civilized race. The peloton was pretty far gone and if we just rotated through at a good pace and didn’t skip pulls or take massive I’M GOING TO CRUSH YOUR LEGS IF IT KILLS ME pulls, we’d stay away to the end.

All of a sudden we were caught by the front, splintered end of the peloton as bridging moves worked their ways up to us. I think we’d covered around 5 laps by then and had been riding for 54 minutes. I continued to bash my head against the wall by spending another lap and a half off the front in a dozen different moves before I decided to give up and retreat back into the pack, 1:20 into the race and 2/3 of my bullets fired.

By then there were only about 60 guys left in the pack. The pace slowed up a bit for the next forty minutes. Breaks came and went but nothing seemed like it would last. Then a dangerous two or three moves went with four or five laps to go and it almost looked like game over for about 40 of us in the pack. It got really hard for a lap and it was all back together again, but during that lap, since I went to the race by myself and two bottles were NOT enough, I had tried to steal a bottle in a feed zone but ended up just knocking it to the ground. A few minutes later after a real hard tail wind drag, some big old bloke came up to me and knocked me hard on the top of the head three times and screamed at me in Flemish. I yelled at him and we shouldered each other for a moment in the middle of the pack as we came to a cobbled section. He raised a hand as if he was about to hit me in the face, but decided not to and just yelled some more. At that point I realized it was because I had tried to steal his bottle. I controlled my temper and resisted crashing both of us out, which was my first idea and was so mad I was actually on the verge of doing it right then and there without thinking. But it would have been a bad way to make a name for myself over here, so we continued to yell at each other instead. It was another minute before he finally shut up when it got too hard to talk again.

With three laps to go I began to get more attentive and chased down a few moves. My legs were in pretty bad shape by then and I needed food and water. No gifts here though. I decided to be real conservative, as it seemed like everything was being chased back. Though, I blew up a few times bridging or trying to bridge up to moves anyways.

Finally, with a little over a lap to go, a move finally got away and stuck. Then another. I was in neither and began boiling with frustration, pissed off that I’d done so much work off the front and now wasn’t even going to be top 20. I came into the final kilometer cobbled stretch too far back after being lazy and finished 38th. Turns out we were actually sprinting for 8th place somehow, with one guy winning by 10 seconds and six more up the road by five seconds. Should have moved up more before that final turn. Idiot. Most of the races I did last year were won by breaks going in the first hour, then after that it was usually the break that went with about an hour to go. I don’t remember any winning moves going in the last 20 or 30 minutes. But these races are pretty inconsistent, which is why I like them. The winners are not inconsistent though. The guy who won today took his 400th victory. Yes, 400th. Not only did he have the strongest team, the old 6’5″ behemoth was also probably the smartest and fastest guy in the whole damn field. Not to worry though, with a bit of luck I can tell that I’m strong enough to get on the podium here.

After the race I attempted to get out of my daze with a banana and some sugary “Hotel” bread, drank water from the bathroom in the bar (the race’s HQ), attempted to wipe the dirt off my face, collected my five euros for returning my race number, and started my ride home. Realized I had a flat three minutes later. Fixed it. Arrived home totaling 122 miles in a little over 5 hours. Ate half a million calories, took a cold shower because most of the time we don’t have hot water, ate more food. Body stopped throbbing. Couldn’t sleep though because my room is the only hot place in Belgium. Took another cold shower at 2AM–this time by choice. Other choices: swelter with the window closed or open the window for a breeze but let mosquitos in and get blasted by loud highway traffic noise right outside the house. Actually, even if the window’s open it’s still hot and even if it’s closed they’re still mosquitos and traffic noise. So really there’s only the idea of choice, much like democracy.

Races on Friday (again in Lokeren) and then a hillier one on Sunday.

We’re on the upper level on the far end. 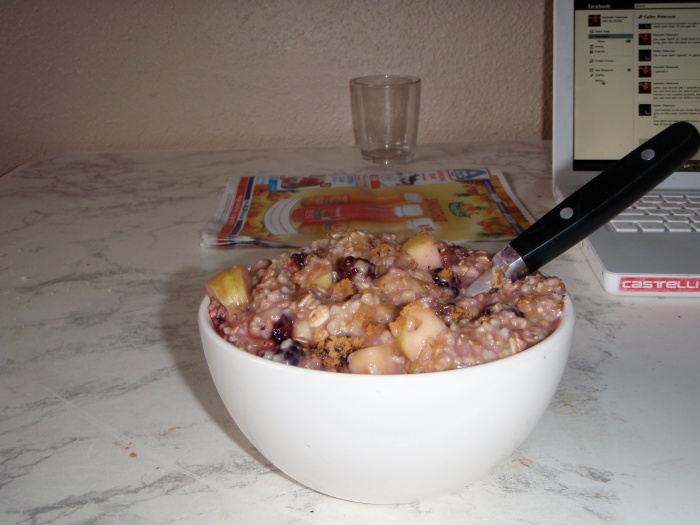 Really? Because I’ve never seen this in a hotel. Good ride food though, along with my Hammer Nutrition.

This doesn’t even capture how dirty or tired I really was.

Speculoose and banana…would have made for a great recovery meal but I didn’t have any. So I ate this instead: