This weekend was some of the best-run racing I’ve done this year.  The City of White Rock and the BC Superweek organizers know how to put on a great show for the racers and the spectators.  The rest of North American racing: take note.  And people are so nice in Canada!  USA, wtf??  Get with the program.

Mango-peach-pineapple-banana-orange juice was a bad choice.  I fought back vomit numerous times throughout the three and a half hour race yesterday.  The other day before the race, while at the supermarket, I had chosen a tasty looking can of frozen juice concentrate to use as race fuel, along with my assorted Hammer Nutrition products.  I divided the can of frozen juice equally among the two water bottles that I started the race with.  It was a pretty thick concoction of juice sludge.   Very thick and syrupy.  And it gave me terrible acid reflux.  But it tasted pretty good, so it’s hard to say if it was a good decision or a bad one.  At one point, while I was at the front of the breakaway group I burped up a huge mouthful of warm juice.  My cheeks bulged, as did my eyes in surprise.  I couldn’t just spit it out since I was on the front.  It would no doubt splatter all over the guy behind me, which I think was Brad Huff at the time and he would have likely been quite angry had I covered him in juice throw up–and it would have been obvious that it was throw up and not just juice because I hadn’t been drinking out of my bottles recently.  So I swallowed the still sweet but now bile-tasting tropical juice and hoped it would stay down this time.  It did, for the most part.  At the time I still had almost a full bottle of juice left, and had to continue drinking it since I was out of all my other nutrition.  As my teammate Chris Wingfield would say, “Piss poor planning gets piss poor results.”  In this case he’d be partially correct, but not fully.  I placed 2nd.  Very close to the biggest victory of my cycling career, but just lacking the tinniest bit at the end.  If only I hadn’t spent so much time concentrating on keeping the damn juice in my stomach.

Though the juice thing did happen, it had nothing to do with how my race unfolded.  In fact, I’m pretty happy with how the race went.  The podium was definitely decided by who had the best legs at the end.  It was that kind of course.  A strong man’s course.  Steep, short power climbs.  Lots of corners, lots of accelerations, lots of pain, lots of excitement.  Here’s how it went down:

We started off at the wee hour of 9AM, which in Canook land is actually closer to 8AM since it’s further away from the equator and thusly further from the sun.  Chris and I were groggy and tired that morning as we woke at 6AM, the previous day had been filled with strenuous activities such as stacking rocks by the water and eating chicken burgers down by the docks in Vancouver, and then getting locked out of Chris’ grandparents’ house and having to climb through the upstairs window to get in.  The 134 kilometer stage loomed on my mind’s horizon as I prepared my morning feast.  For breakfast: 1/2 cup of steel cut oats with blueberries, strawberries, raspberries and two bananas.  Two eggs, two pieces of bacon, small serving of potatoes with veggies.  2 liters of water.  1.5 cups of coffee.  Fueled for a day of suffering, we headed out the door and drove over to White Rock for the race.

I was very confused about the course.  There were multiple circuits, figure eights, short laps, long laps, different lap numbers to remember, cones…I had no idea what was going on ever.  Which is not abnormal.  So I pretty much decided I’d ride hard at the front for the first lap or two and figure things out when we got going.  Turns out there were 17 laps total.  11 of which were on the long course which was a 10km figure-eight loop that went past the start/finish and included two super steep climbs.  Then after those were completed there were 6 laps of a 3.8km course that also went through the start/finish but only included one of the steep climbs (it was basically half of one of the long circuits).

The race got underway and I found myself in the top ten over the first climb, I staid up there and then went to the front a short while later to drill it over the top of the longer, steeper climb.  That created a gap with three of us off the front.  We rotated through a few times and (I’m already having trouble remember the details here but I think…) about ten guys eventually bridged up to us well before the lap was through.  Things whittled down fairly quickly over the next two laps until we were just nine, composed of three Louis Garneau riderers, two Trek Red Trucks, one H&R Block, One Jelly Belly, one Kelly Benefits, and me.  I felt strong the entire day, but tired to conserve as much as I could without compromising the life of the breakaway.  We had 1-2 minutes for the majority of the day, so I never sat on.  No one really sat on today, though some riders pulled harder than others.  On the hills I found it most comfortable on the front setting the pace, and ended up leading the group up the harder climb about half the time.  This type of course suits me very well.  In fact I believe this course was designed specifically for me.  The climbs were just short enough and just long enough for me to feel at ease.  At as much ease as you can while pumping out 4-5 hundred watts over and over again up 15% grades.

Mid way through the race H&R Block’s star rider Sebastian Salas bridged across to us from the diminished field…solo.  Making up a minute gap.  A few laps later he blew the breakaway apart and we were down to six guys heading into the short laps: Tim Abrecrombie and Jason Thompson (Louis Garneau), David Vukets (Red Truck), Brad Huff (Jelly Belly), Sebastain Salas (H&R BLock) and myself.  Here it began to get tricky.  Louis Garneau had two guys at this point, while the other four of us were teammateless in the break.  We had 2.5 minutes on the chasers, so there was plenty of time to play cat and mouse.  A $50 dollar gift certificate for the first person to cross the line with 5 laps to go persuaded us to sit up and stare at each other even more.  I couldn’t help but wonder if the gift certificates were for one of the many fine ice cream establishments in White Rock along the beach front.  I’d been salivating over those ice cream shops for the past couple days, dreaming of Rocky Road and fudge swirl.  I didn’t contest the prime sprint though, and instead counter attacked right past the finish line to see if I could sneak away.  Didn’t work.

We attacked, sat up, chased, attacked, pulled through slowly, attacked and so on for the next four laps.  Brad Huff had been dropped by now.  The two LG teammates had been riding wisely and had been launching moves and sitting on while the other three of us brought them back.  It looked like it would all be together heading into the final time up the hill ( which is followed by a fast, technical descent and a 180 degree corner for a final 300 meters heading back to the slightly uphill finish).  Near the base of the climb, out of nowhere came Huff streaking by all of us.  We’d sat up too much and he’d been able to catch us.  All five of us simultaniously said, “Oh shit,” as he came by.

He was chased down though, and then we faced the climb one last time.  It was the 17th time we’d been up it.  We shed Huff again as we began ramping up the pace.  I had planned on sticking on Sebastian’s wheel, because I thought he was the strongest.  I’d been thinking all day long about tactics, knowing that I could win as long as I played everything very wisely and always staid attentive.  As for the finale, if you could come out of the final corner in second or third wheel it would be ideal for taking the sprint.  Though this final hill was steep and long enough that I figured we’d pretty much all come in with time gaps and the race would be won with a solo effort launched on the climb.  Tim attacked.  His teammate sat up on the front.  I sat behind Sebastian, waiting for him to go around and bring it back.  He didn’t.  No one else did either.  Tim’s gap was growing and I finally decided to just do it myself (this whole ordeal took me about 5 seconds of thinking, so not that long).  I jumped around the three guys in front of me and started closing in.  I looked back, expecting the other guys to be on my wheel, but they were already gapped off by quite a bit.  I realized no one had been trying to be tactical, they were just all at their limit.  It was up to me to close the rest of the large gap to Tim.  The rest of the climb was about a minute long going all out.  I couldn’t get any closer to him, and staid about seven or eight seconds behind.  I was finished.  My legs were shot.  I was going all out and felt like I was just barely going forwards.  I looked back to see David coming up on me.  He was still pretty far back though, and I knew that as long as I didn’t crash on the final corner I’d take second place.  I rocked my back back and forth a few more times in desperation to make up time on Tim, crested the climb, flew downhill and took the corner pretty hot, then gave a semi sprint to the line to make sure I didn’t get passed in the final few hundred meters.  Second place.  I had been telling myself the last half hour that I was going to win.  I HAD to win.  I WOULD win.  Second or third or fifth would be a huge let down.  And it was.

I felt I had been so close to a breakthrough performance.  I sort of had one, but not quite.  So close.  I was cheered up when I realized I’d won more money in 3.5 hours than I knew how to spend.  I could afford chocolate dipped waffle cone triple scoop with sprinkles on top.  I could get a banana split.  A milkshake AND and ice cream cone!  The podium presentation was pretty cool too, and afterwards Winger and I made off with armloads of free bars, food, and samples form the vendor’s tents.  I almost got some ice cream, but thought better of it.  And ate a box of cookies instead.  Gotta watch my weight for Cascade.

Our rock tower was the tallest in the land, greatly surpassing the puny competition.  I felt like tipping over all the other rock towers– their insignificant stature brining shame and embarrassment to the rock tower gods after our great tower was constructed. 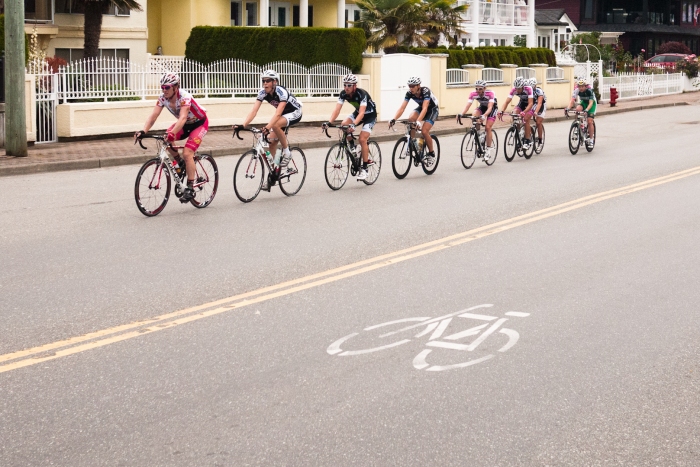 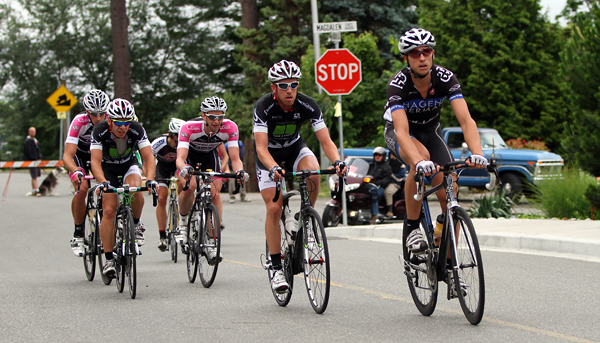 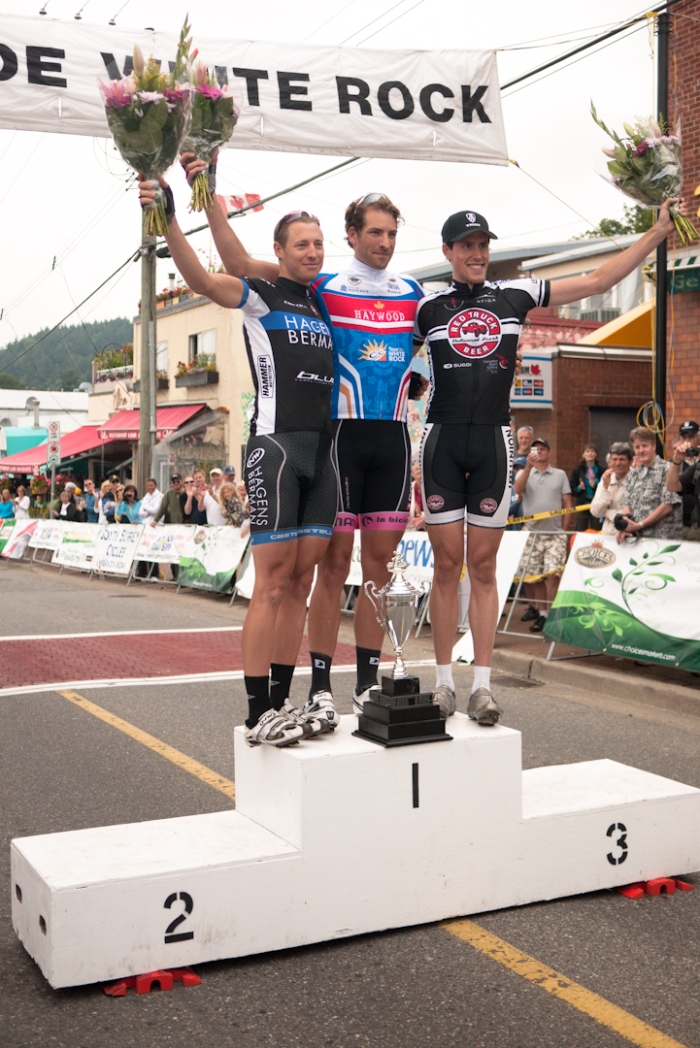 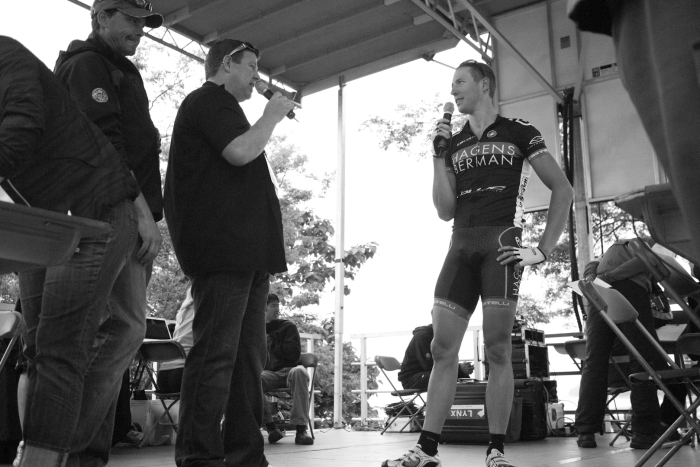 Me “I’ve never gotten to speak on a microphone before.”

Race announcer “Well you can say anything you want.”

Me “Hmm, I don’t really have much worth saying.” 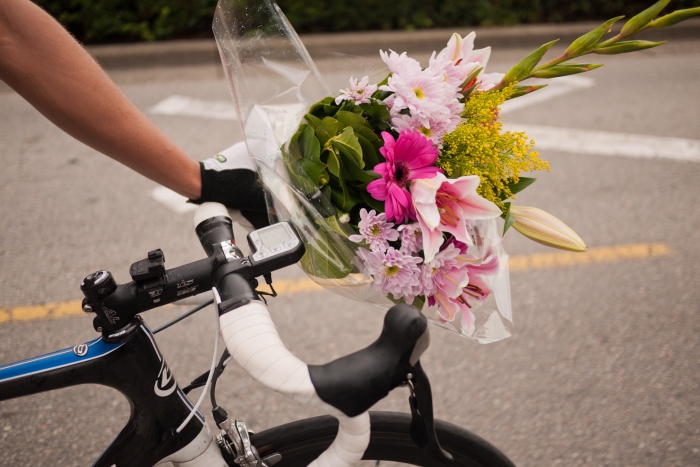