I had a killer day of intervals today.  Killer.  My powertap said that I surpassed even my wildest dreams.  8×4 minutes on a super steep, closed-to-the-public-via-gigantic-million-dollar-gates, road up Parrot Mountain.  My only concern with how good I felt is that I just used up my legs’ best day of the year on a damn training ride.  If so, it wouldn’t be the first time that this has happened to me.  What gives me hope this year is that it didn’t happen in January or February like usual, so even if it was my best ride of the year it was at least during the race season and close to a race.

After Enumclaw I decided to start getting good at time trials.  My 45th place there was the last straw.  Or is the saying “last draw”? I’m not sure.  No one does.  To get good at time trialing, I’ve heard one must practice on the time trial bike.  As it stands now, I generally lose around 50 watts in the TT position, gathered from the few times I’ve TT’ed with power data.  So training on the TT bike is what I’ve been doing.  It may not be quite enough time to get good by hood.  I’m not sure if a week will cut it, but it’s a start.  So far I’ve been on the TT bike on the trainer every day for the past five days.  My plan is to ride it every morning every day that I have a ride.  If I still ride like a little girl by next year then I know it won’t be from lack of practice and is likely a lack of wind going in my favor.

To help kick-start my new approach and happy feelings towards flat time trials that require pacing, skill, balls, and aerodynamics, Jack VanderZanden has loaned me with some go-fast-wheels and go-smart-pacing equipment.  Both of these things come in the form of a SICK set of wheels.  Observe:

In case you didn’t see, that’s a powertap stuck inside of that Zipp disc…which is quite possibly the badest piece of equipment known to man.  And in case you’re my mom or grandma, I’m using “bad” as a good term. 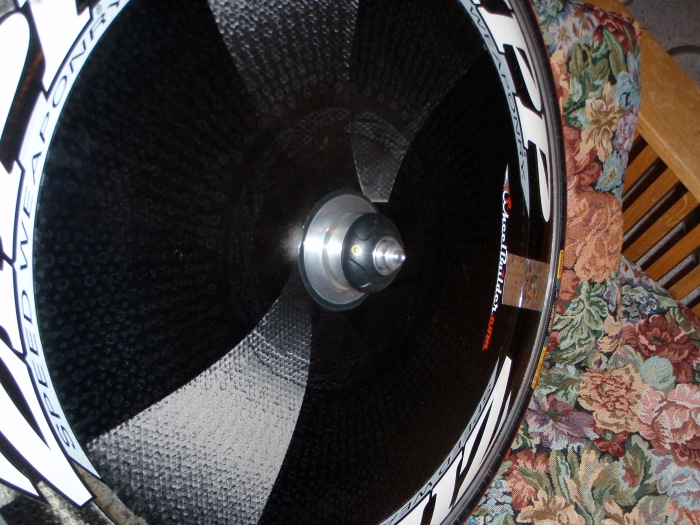 And to add to the arsonal, check out this bad boy.  Our new team-issued Razor TT helmets:

Now onto my future plans, which I alluded to talking about in the title of this post.  In Kennett’s future lie two paths.  This fall, after race season has commenced, I’m thinking of either going down to the southwest to work for a national park doing trail maintenance and living in the mountains, OR become an Alaskan fisherman.  One of the two.   I’d like to work on one of them crab boats you see on Deadliest Catch, but I heard they don’t take people who’ve never worked on a fishing boat before—and that they don’t take people who don’t own an endless supply of the world’s worst attire for extreme wet/cold conditions: hooded cotton sweatshirts.  I used to own a few of these but they’ve all disappeared.  I lost my last one in a bar a couple years ago when I took it off to dance and left it at a booth.  Some jerk stole it, for it was gone when I returned for it.  If I were to die tomorrow my only regret would be losing that sweatshirt.  That, and chipping my tooth on a small pebble lodged in a Snickers bar I found on the road one day.