I have five long term goals that I’m working towards accomplishing this year/decade.  Here they are (not in any particular order of importance):

Number two: strike up a conversation with the hot girl at the farmer’s market that doesn’t involve kale or other dark leafy greens.

Number four: own a moped/scooter with a bike rack on the back.

Number five: carve the rind off a large watermelon, leaving the innards intact, and eat said inner watermelon (preferably sculpted into a perfect volleyball-sized sphere) with my hands.

I’m currently working pretty hard on number one and two, which means the others have taken a back seat for the time being.  As far as number one is going, it’s hard to say for sure because lately I been having some really good days, followed by a lot of really bad days.  I’ll report more on this later.

As far as goal number two goes, I somewhat accomplished it on Wednesday, to tell the truth.  Though I’m not sure cabbage, which technically isn’t a dark leafy green, should count for a topic of conversation.  I’m still undecided on this.

This brings us to number three.  Number three isn’t really a goal of mine.  It’s a goal of Forest Gump of course.  But since I attempt to shape my life in his footsteps I thought it would be good to throw one of his dreams in there (I have no desire to fight in a war, play pro ping pong, or run across the country for three years, two months, fourteen days, and sixteen hours).  A guess a good compromise for this shrimp boat captain goal might be to instead just “eat as much shrimp as I want for a solid month,” which would be around about a boat load of shrimp.

Goal number four.  This goal goes hand in hand with number one, mainly because I’d need to be paid enough to buy a scooter, gas for the scooter, a bike rack, and a cool paint job for the scooter.  The scooter/bike rack goal is a vital part of my plan to live up on a mountain in Chile, Peru, or Ecuador and train down on the lower slopes below 3,500 feet.  I’d like to live at about 9,000-10,000 feet in a small jungle hut surrounded by a curious and imitative band of parrots and monkeys.  Every morning I’d wake to the intense sounds and humidity of the rain forest, eat a massive amount of tropical fruit from the local farmers market (where there would likely be a hot native girl working the kale stand), and ride the scooter, with my bike on the back, down the mountain to train for the day.  When finished training, I’d ride the scooter back up.  Some days I’d leave the scooter at the hut and just ride all the way down, but I’d probably only do that once or twice a week since those days would be extremely long.

The scooter’s paint job would be very important.  In my dream world I’d paint it pink with a black and white scull and cross bones.  Except the scull would be smiling and giving a wink, and there’d be a skeleton hand pointing its index finger and thumb (like a gun) at the viewer.  Above the scull’s head there’d be a dialogue box asking, “How you doin’?”  The emphasis on the “you” would be crucial, as I’ve come to learn over the last year. 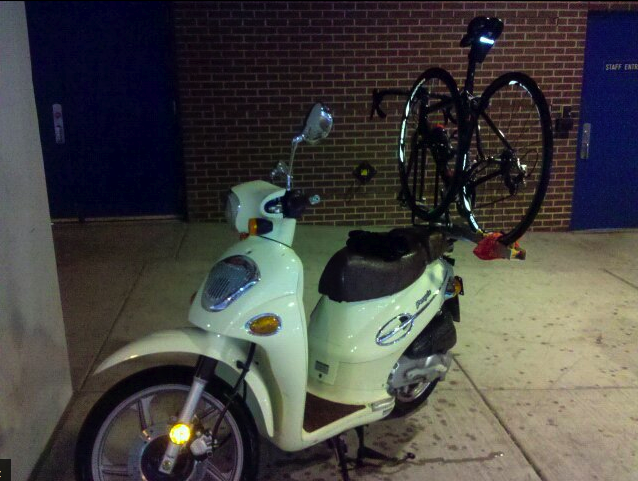 This brings us to number five.  Number five needs no further explanation.  I mean, don’t you dream about that kind of watermelon experience too?  If you don’t, I think you better re-analyze your priorities.

In other news I just ate quite a bit of bad smelling chicken.  It’s been in the fridge for a long time.  I ate it with a bunch of salsa, so I’m hoping the jalapenos will kill the bacteria.  I’ll keep you updated.