Last week I did the Rapha race/ride from Neskowin to Portland. It was a 137-mile team time trial; an unofficial race since there was no traffic control or referee. There were two checkpoints that we had to make and the race ended at some bar in Portland.

Jim won a Kink radio contest (or in my opinion robbed a bank) last winter and the prize was a huge amount of money in gift certificates at Spanish Head Hotel– just south of the race’s starting point. So, our six-man team, which included me, Jim, Chris, Rob, Adam, and Brian, plus our drivers Karey and Gavin, lived large the night before the race. Money was not an issue. If something on the menu looked good, you could just have it. Appetizers, room service, wine, Champaign, brandy, cigars, tea and crumpets, dinner at a restaurant where burritos were not on the menu, you name it, we had it. 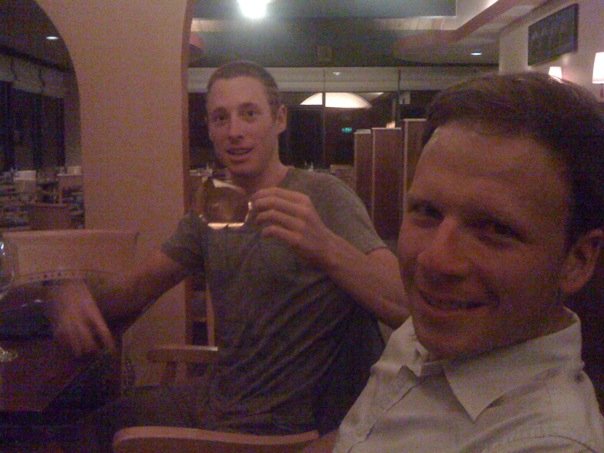 Here Jim and I are at the dinner table showing off a gold colored piece of tinfoil wrapper from a piece of chocolate.  Now that’s high class.

After horseback riding on the beach, we each relaxed in our own private saunas before being treated to massages with happy endings. Later in the evening, we took a helicopter tour of the coast and saw a pod of blue whales. Jim wanted to get a closer look and the rest of us agreed that a bird’s eye view was not the best way to observe Mother Nature, so the helicopter pilot took us back to the hotel and we switched to the submarine.

Whale watching grew tiring though, which is a reoccurring issue when living the lavish life. When one is as privileged as we were, one grows ‘tired’ of things. Such as: “Alfred, I grow tired of these jesters, off with their heads.” We needed something to pick up the evening before dinner, and a good bit of fencing was just what the doctor ordered to give us an appetite for our 12 course dinners.

Having accomplished all the things rich people must do (eating appetizers, horseback riding on the beach, helicopter rides, submarines, fencing), we went to sleep in gold leafed quilts and had nightmares that we lost all our money in poor investments or stupidly gave it away to orphanages.

The next morning we rolled out from the start line as 76 trombones played for us and the massive crowd that had gathered. It was an awesome ride, one of the more fun ones of the year. I started with the idea in my head that it was going to be simply for fun and I didn’t care how we placed. But my legs were feeling good in the cool, coastal air as we ascended our first climb of the day. It was almost foggy out and everything was green around us, just like I had predicted it would be. All of a sudden, we passed our first team.—-there were 23 teams in the race, with the slowest going first, followed in order by faster and faster teams at 3 minute intervals. We started 20th, meaning the organizers thought our team was the fourth fastest. That meant that the first team started an hour before us.—-Anyways, we caught that first team within ten minutes somehow and I began to think of victory. No longer were my thoughts on going at a pace everyone was comfortable with. We had tasted blood, and now it was time to hunt down and kill the rest of the weak prey in front of us, smearing their dead carcasses across the road like the road kill they were equal to.

But things didn’t quite go like that. Because 20 or 30 miles later, the team that had started behind us, Nike, was within a minute of us and we could look back and see them on the long straight sections of road. We ramped up our pace immediately. Being the prey seemed to spark a little fire under everyone’s saddle, and we began pedaling with urgency.

It worked too, because they soon became out of sight. By now we had been making excellent time, averaging over 23 miles an hour over some hilly terrain. The pace felt good. But about 2.5 hours into the race, we came to a stop at a country gas station. Some of us thought we were stopping because it was our first checkpoint, and when we learned that it was only for filling up our bottles, we got pissed. Nike caught us as we got back on our bikes; luckily they stopped for water too. I was mad because I thought we had just thrown away two minutes for no reason. It wasn’t hot out yet and most of us still had a bottle and a half left (we each carried 3).

Turned out that stopping was a very good idea, because later on in the day, some of the guys would be hurting a lot from overheating and dehydration. Those two minutes could have easily been 20 minutes if we hadn’t stopped.

Chris and I rode pretty hard on the front for the next couple miles as we burned off some frustration. By this point, I wanted to win and just felt like hammering it the rest of the way. But one of the main ideas about this race is that all levels can do it and compete together. We had a team with two cat 1’s, two cat 2’s and two cat 3’s. And finishing and working together was our primary objective. Plus we were racing against teams with cat 5’s and single speeds, so if you think about it, winning was probably the least important objective.

Although, one thing to always keep in mind if you can’t succeed, you should always attempt to bring others down with you (or preferably below you), which is why I yelled taunts to each team we passed. Yes, tears were shed, which in turn gave our team more drive. I thought I over-did it when I yelled “BOOM. Gotcha,” to the women’s Veloforma squad, but Chris was the meanest out of our group by far. I only made vague insults about how slow the other teams were riding. But Chris took it a step further, attacking their personalities, appearance, mothers, and even their choice of bike frames.
“Not only are you fat and stupid-looking, but you’re riding a Trek 1200. Were you beaten as a child or what?” And this was him only getting warmed up.
“Watching you attempt to peddle that thing makes me want to gouge out my eyes, roll around in a black berry bush, then hop in a bath full of lime and salt. A legless hippo riding a unicycle would be more graceful than you. I hope your tire slips out on a piece of gravel and you slide under a semi truck.”
“You call that pedaling?? How about you hand that bike over to me and I’ll show it how it’s supposed to be ridden, kind of like I did with your mother last night. And by the way, she was about as pleasant as the up-slash of a porta-potty.”

His insults, fueled by his rage for seagulls and other ocean dwelling avians, grew into intimidation and then physical threats.
“HEY! Out of the way, Ironclad, or you’re going in the ditch!” Chris shouted as he shouldered one of their riders to the ground.

At mile 80 or 90 Brian and Rob were hurting pretty badly; we had just come down from the coast range where it had been cool and shaded. Now the terrain was flatter and exposed to the sun’s 90 heat. Things started going downhill.

Chris broke a spoke during a gravel section, which took about 5 minutes to get figured out. We still had a lot of riding to do and people were getting more and more tired. We had to take an emergency stop at Ace Hardware for something to drink and eat, which took a huge chunk of time. But it was necessary.

There were about 25 miles to go after that stop, and suddenly Jim started getting a terrible stomach cramp. A few minutes before, he had been fine. It was either some Coke he drank, the heat, or something he ate, but whatever it was, it completely destroyed him.

With 10 miles to go, we started climbing Thompson hill to get into Portland. I think it was a 3-mile climb, but felt way way longer. Maybe like 3.2 miles or so. Chris, Adam, and I pushed Jim the entire way up, while Rob and Brian suffered behind with one thought in their heads “there’s beer behind the hill,” which is what I think Rob’s mantra had been since mile 50.

We got into town, rode through traffic to the finish line, and came in 5th overall with the third fastest time of a little over 7 hours. Not bad at all and some serious celebration was in order that night. 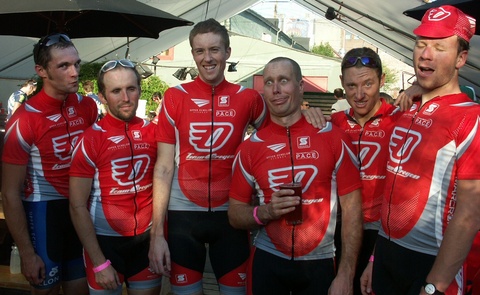 Here we are at the finish line bar.  Apparently Rob went so hard he lost a massive amount of brain cells, Chris went so hard he thinks Brian is Karey and is about to kiss her balding head, and Jim went so hard he’s taking a nap standing up.  Much like a horse.

ps Adam, I stole this picture from you, so thanks.

One thought on “Rapha Gentlemen’s Race. Neskowin to Portland.”