Well, I’m finally tired.  I woke up this morning to the rooster at 5AM.  I closed the window, preferring to swelter in the heat than hear that thing crow its head off anymore.  I woke up again a few hours later and had a duel with a fly that had been landing on my forehead and buzzing by my ears for the last hour.  I cursed and swung my pillow around at it without any luck.  I put a shirt over my face and laid back in bed.  I finally got up for good at 11:00, still tired.  I ate breakfast, then lunch an hour later.  My body and legs have payed for the abuse I’ve given them the last couple days.  Three races, 150 jumps (which was a very stupid idea), and a five hour ride in 95 degree heat.  I am tired.  And I am very sore, mainly from the jumps.  Today I sat around, massaged my legs, watched some movies, ate, went on a very easy ride, laid in bed, and ate some more.  Tomorrow will likely be the same routine, but with a little pre-race intensity for Sunday–which is the next race.  Here are some pictures. 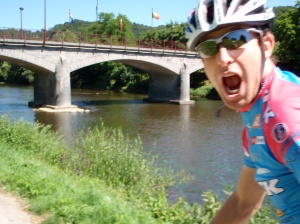 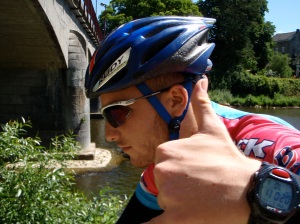 And one more thing: I would just like to give a big thanks to all the oil and car corporations that have united this world in such a wonderful way.  Here I was: afraid of what the traffic would be like in Belgium.  I was worried that the cars here might be tiny, smogless, and the drivers courtious of cyclists.  But my fear proved to be false.  The Belgians make me feel just like I do at home!  Thanks to the driver’s complete lack of concern for us two-wheeled idiots inching by like snails on the side of the street, the thick smog coming out of logging trucks, and the surprising number of SUVs (which take both lanes of the road) I have absolutly no home sickness!  It’s fantastic.  And it sure is a comforting thought that wherever I travel in the world and whatever cultural customs I encounter,  I’ll always have a place on the pavement under the wheel of a passing Ford.