Summer is here, though it doesn’t quite feel like it for me. Lacking this season is a dark swim tan, the long hours on the bike up in the mountains, and structured training that I normally plan my life around. Gone too are BBQs, traveling to races, bike to work day, and margaritas at Wapos with friends.

While exercise is still a priority, it’s more for fun and mental health right now than ‘real’ training. I did have the opportunity to compete in Ironman’s VR10 race last week, which gave me a reason to train slightly more than what I had been doing the past few months. And, by chance, the VR10 race started out with a 3K time trial—just the serendipitous distance I’d decided to start training for, as noted in my last blog, two weeks ago.

Tyler, Joe, Andre, and myself went head to head (20 minutes apart) out on Eagle Trail on Thursday with a bike-mounted cameraman filming our suffering. Maybellene got loose from Adelaide at the 1K mark and tagged along at my heels for a hundred meters. After getting a slow start in the first half, I picked things up in the second half and threw down a 9:13 while narrowly avoiding a rogue dog attack by our friend’s dog Jack, who came at me from the side like a wolf ripping out the hamstring of a caribou. I kept on my feet and kicked towards the finish. 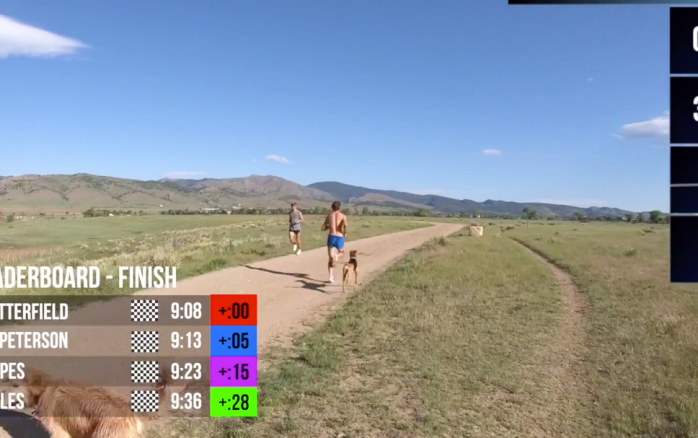 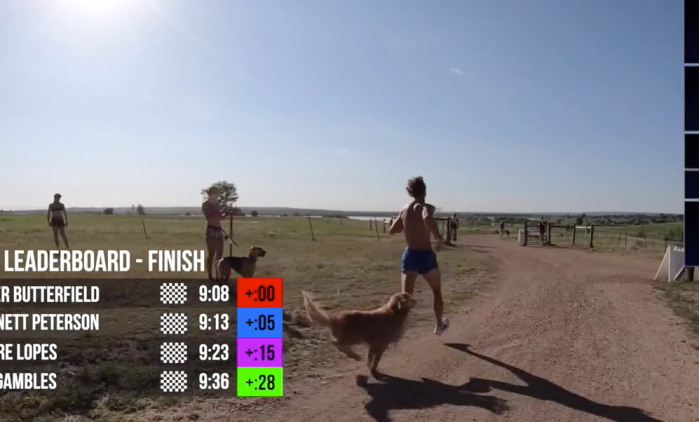 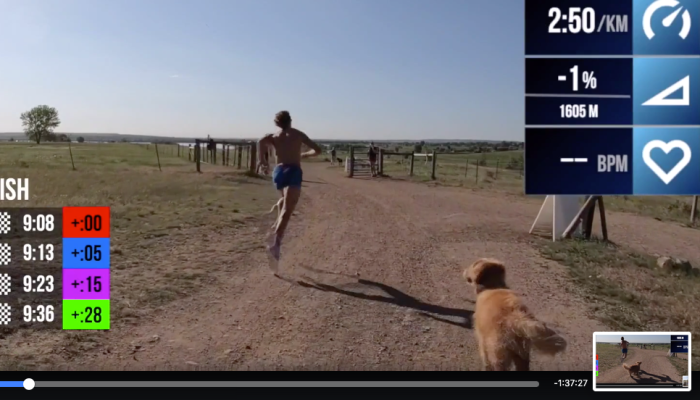 Tyler was five seconds faster than me, with Andre and Joe not too far behind. A few days later on Sunday morning, my stupid alarm on my stupid phone didn’t go off and I woke at 8:30, just 50 minutes before the start of the virtual race, which was to be battled out between our identical quintuplet avatars. With Adelaide and the technical support crew’s help, I managed to get all of the necessary screens, wireless headphones, smart trainer, apps, and other stuff figured out with 90 seconds to spare. There was much cursing and stress done by me.

The race began before I had the chance to realize that I was A) riding a trainer and B) riding a trainer in a virtual race—one thing that I suck at and another thing that I vowed, just a few months ago, to never do. But, with an ego to boost and prize money to earn, I guess anyone can be convinced to do the things they swear off…like meth and organized religion. And now here I am writing a god damn race report about it. Fuck my life has probably never been said more, or used more appropriately, than in 2020.

15 minutes into the race, I found myself actually enjoying the damn thing. I’d never ridden a smart trainer until a few days before the race, and it was currently helping make all the difference. Instead of sitting at a monotonous, boring, even grind like a normal magnetic trainer, Justin’s smart trainer, which I was borrowing, adapted to the rises and dips of the virtual race course. This seemed to trick my legs into thinking they were outside on pavement, and for once they cooperated on an indoor bike. I guess this has been old news for most of you, but I never thought riding a smart trainer and using a virtual course would be enjoyable. It’s the silver lining of a million people dying from covid I guess.

Anyways, I wasn’t quite sure how to manage the money primes throughout the 40K effort; the fastest combined run/ride time won the overall, so I made that my priority and gave the primes a decent effort, but held back on the first one to make sure I had energy to respond if someone tried to come around. Joe took the first prime, then I found myself in the lead for the remainder of the short race. I took the next prime, then Joe took the final one, then I won. Jesus Christ I’m boring myself to death right now with this virtual race report.

I did like the format of the event however, and the broadcasting is pretty darn good, I do admit. I watched part of it a few days later and Michael, funny as always, is insightful and entertaining. The footage of the run was great as well, and I certainly wouldn’t complain if I got invited back for another VR race this summer. Maybellene too. If nothing else, it feels good to be part of something to help encourage others to exercise and compete.

What else have we been doing? Adelaide and I have been paddle boarding, camping, attended Black Lives Matter protests, and have been working on our writing projects—her book Degloved is getting published, while I’ve been spending a bit of time writing the opening chapters of my own sci-fi novel. Yeah, I’m working my novel, damn it. And that’s not even a joke anymore.

The Black Lives Matter protests were certainly the emotional highlight, and lowpoint, of the last few weeks. On one hand, it felt good to show up in support of others who truly need our backing. On the other, it was gut wrenching to listen to the speeches about how we (white people) have intentionally or inadvertently made living nightmares out of the lives of the African American speakers.

I felt pride and shame at the same time when a young black man, who was not part of the protest, smiled and held up the peace sign at me as I marched past on Canyon Boulevard yelling Black Lives Matter—I felt pride because it felt good to be out there giving him hope that at least some white people do care about African Americans. I felt shame because I realized I haven’t really done anything to help end institutionalized racism. Even me being there at the protest wasn’t doing that much to help. Simply not being racist oneself is not enough. Being a democrat is not enough. Having friends or training partners of color isn’t enough. Donating to groups like the NAACP and showing up at protests isn’t even enough. By themselves, debating white people who don’t think racism is a problem and voting for candidates who want to create change aren’t enough (god damn it how is White Bread Biden the best person for the job?) Intervening with physical force when a racist civilian, or cop, harasses a black person isn’t even enough. Doing all of those things is a start, no more.

The average white household owns 10 times the wealth of the average black family, which is why reparations are needed to kickstart a new era of equality. Reforming the criminal justice system and completely dismantling and rebuilding law enforcement from the ground up is a start. Giving land back to Native Americans, education reform, and rebuilding our dilapidated social safety net is a start. These are hard to wrap one’s head around, because how does an individual have any impact on these huge social/political changes? Just like with global warming, ending racism seems hopeless. Maybe that’s why so many well intentioned white people don’t actually do anything. If racism doesn’t negatively impact your daily life, you forget it exists. So once a year, when it’s socially acceptable, we share memes on facebook and call it good.

Unfortunately, hate, fear, and greed—three of racism’s pillars—are much stronger than weekend [keyboard] warrior compassion. Hate, fear, and greed work 24/7, perpetually sharpening themselves day in and day out. Compassion is dulled with time.

Sorry, you came for a virtual triathlon race report and left with a human rights rant. Actually a pretty normal blog post for me.